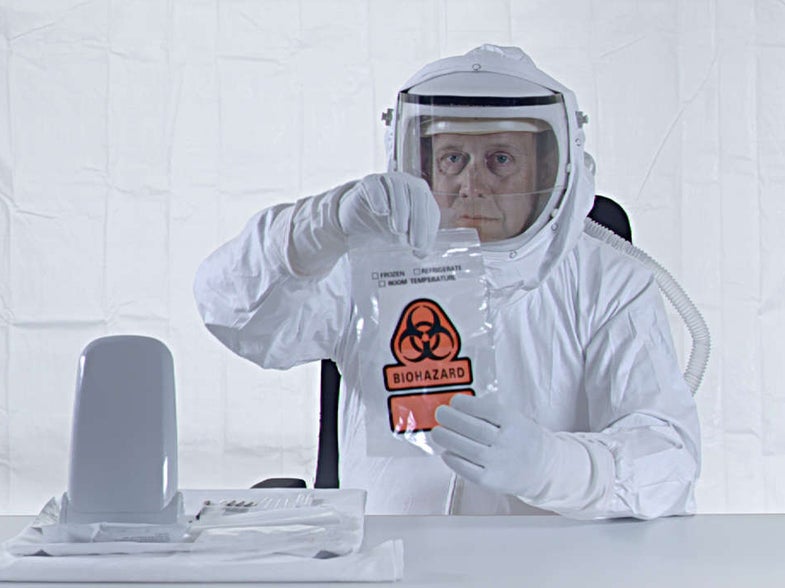 As long as we have been human, we have looked at the stars and wondered if anything like us exists elsewhere out there. More recently, we’ve found new ways to try to answer that question, by capturing images of far-off worlds or sending our own envoys to into the great beyond. Finally, after millennia of waiting, intelligent alien life has come to Earth. How do we react to these extraterrestrials? Do we attack them, or infect them, or do we try to make peace with them? What do we want to know from them, and what does that say about us as humans?

To be clear, intelligent life has not yet come to Earth. But in the new film The Visit, you can play out the scenario to see what might happen if they were to do so. Part documentary and part science fiction, this film is about an event that hasn’t happened yet. It features interviews with experts who delve into the policies and pragmatic measures that global and national organizations actually have in place, by running through a hypothetical scenario wherein extraterrestrials arrive on Earth. But it’s also a contemplation on humanity—how we see ourselves and our inability to cope with uncertainty.

“This is a topic I’ve been thinking about for many years,” Michael Madsen, the film’s director, tells Popular Science. “It would be the most significant event for mankind to experience—there’s nothing else that would so dramatically change human perception on ourselves and on the universe.” 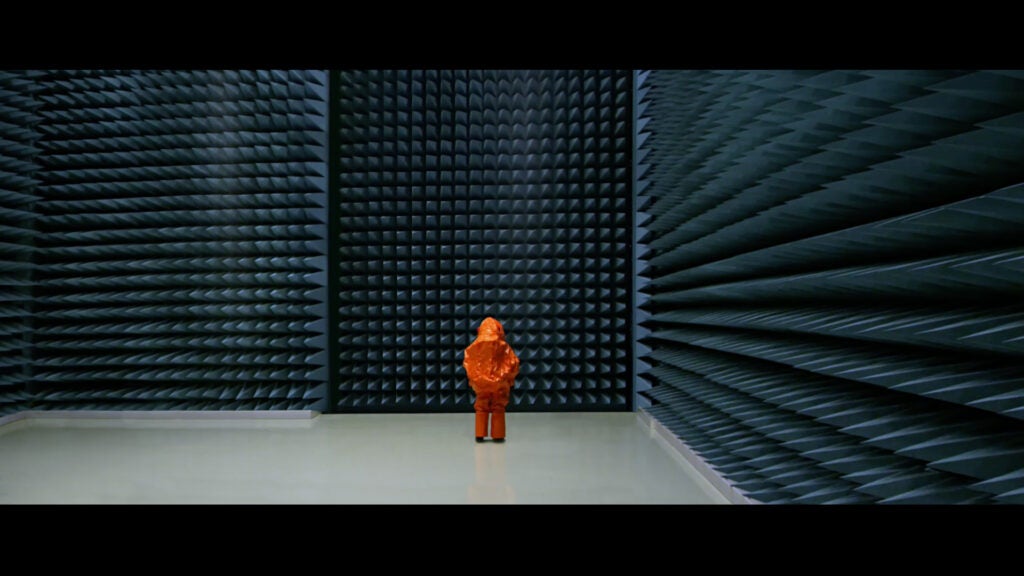 Scientist Chris Welch imagining the inside of an alien spacecraft

The film, which took about four years to make, has a cast consisting of experts and officials from the United Nations, British Ministry of Defense, and NASA. (Yes, there are real organizations with protocols in place that outline governments’ response to an alien visit.) Each person looks into the camera and answers Madsen’s questions as if they were addressing the aliens themselves.

That unique perspective does a couple of important things for the film—for one, experts can play out this scenario that they’ve thought about, anticipated, and planned for much of their professional lives. They ask all the questions you might expect—Why are you here? What do you know about the universe? How does your brain work?

But Madsen also noticed a sense of relief in how the scientists played into the scenario. “It’s more than the fact that these experts have been thinking about these things—there’s tremendous longing at play in these questions,” he says, “All of us have been looking at the stars and wondering if there’s life, there’s this quasi-religious notion here that, if there’s something out there and if it sees me, I will gain some kind of extended existence. I will be seen.” Identity is at the heart of that desire, he adds—the same reason we post constantly on social media. If others see us, maybe we can get a sense of where we fit in the universe.

Why are you here? What do you know about the universe? How does your brain work?

But when experts are speaking to aliens and the audience watches, viewers become alienated as well. “The experts are there as experts but we see them in a way from the outside, from an alien perspective, and that makes us observe them in a different way,” Madsen says. Astrobiologists know a lot more than the average person about what kind of alien might truly be out there, but unlike in a scientific paper on the subject, the film enables viewers to read the concern on their faces, to read their humanity.

By taking this hypothetical seriously, the experts had to consider how we understand beings that are so dramatically different from ourselves. One of the most fantastical elements of The Visit is an interview with Chris Welch, an astronautics professor at International Space University who has agreed to be the first human inside an alien space ship. Madsen wanted him to imagine and describe what it would be like inside an alien spacecraft, without falling subject to our presumptions that all aliens look like little green men.

“If we were able to meet something from another world, there’s only one thing we can say for certain: It’ll be beyond our comprehension, it’ll be so radically different that we will have nothing to compare it to,” Madsen says. Welch assumes that if a superior being came to Earth, it would present itself in a way we could understand or recognize, so he describes how he imagines the inside of the alien spacecraft might smell, look, or feel in a way that feels familiar and yet completely foreign. 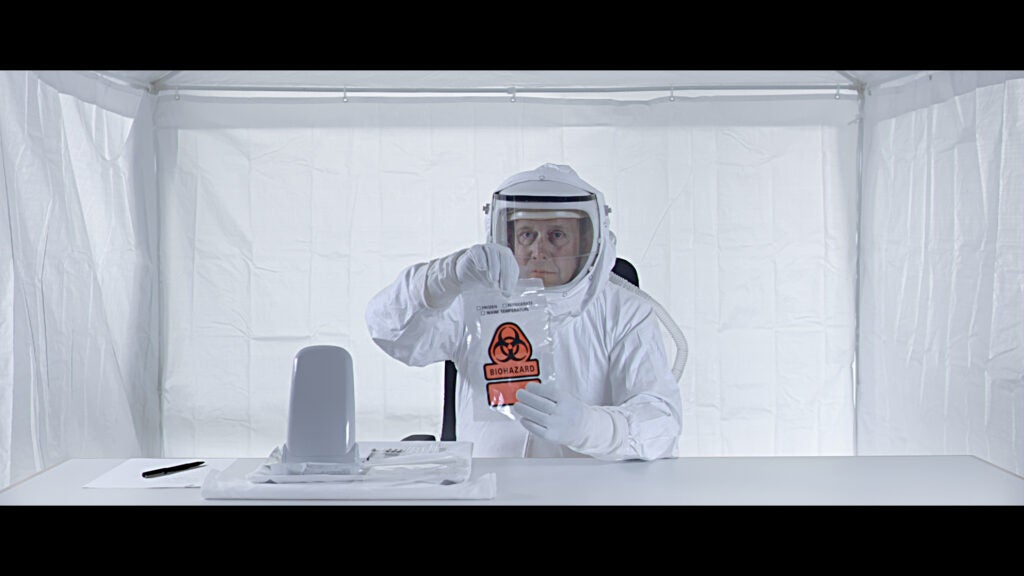 A scene from The Visit

Alien beings would bring so much uncertainty to anxious earthlings. One of humanity’s ugliest sides comes out when we do not understand or don’t have control. There are a lot of things officials won’t know if aliens visit Earth, and not knowing the facts allows our fears to germinate and chaos to ensue. Though we would be curious about the aliens, some humans would rather attack them than surrender our grip on control and knowledge. This, Madsen says, is one of the things that struck him the most when making The Visit—the thin line between civilization and chaos. “If people are afraid, it’s scary how easily the varnish of civilization can be penetrated,” he says. “So little has to happen before things go into Armageddon.”

One of humanity’s ugliest sides comes out when we do not understand or don’t have control.

At its heart, the film is a meditation on what it means to be human—how we construct our identities, which parts of ourselves we are most comfortable with, and our unrelenting need to be in control.

The Visit recently premiered in the United States and Denmark, and will soon be released all over Europe. So far, the reviews have been overwhelmingly positive. But Madsen knows this isn’t a film for everyone—some people say it’s too slow, or aren’t willing to suspend their disbelief enough to play into the hypothetical. Madsen’s goal isn’t to make a film that is escapist, but rather to create space for the audience to retreat into themselves and see those beautiful and unsettling parts of humanity with clear eyes.

“Some people think [the film] is too unreal to take seriously. But nothing can be unreal because we can imagine it,” Madsen says. “That imagination is worth taking note of. I think that’s what Neil Armstrong was talking about—that giant leap is in our imagination so that we can see the world in a different way. That includes aliens coming to Earth—it would give us a totally different way to view the universe and ourselves.”

You can buy or rent The Visit on iTunes or Vimeo.