Lasers with the force of a giant impact 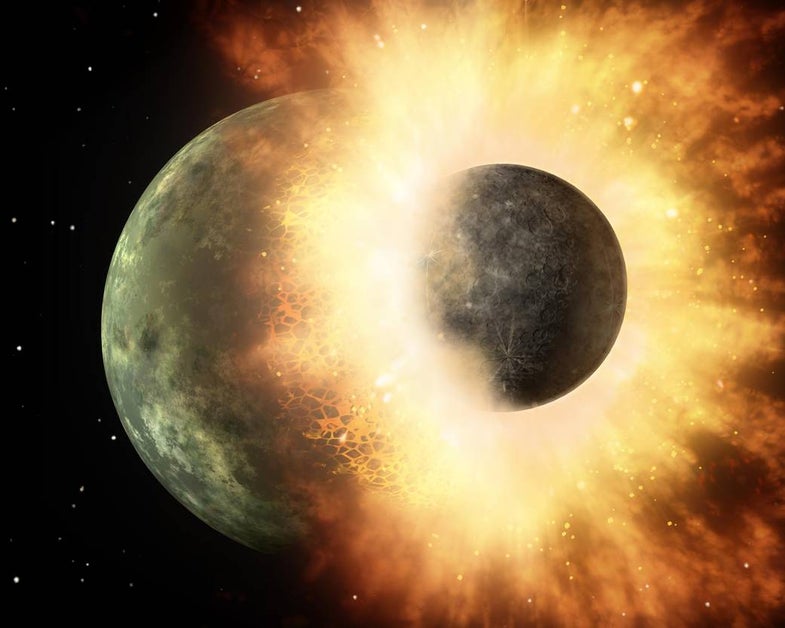 Zapping rocks with lasers to learn more about them is one of the more recent developments in planetary geology. The Curiousity Rover is now able to make its own decisions as to which rocks it targets with its onboard laser. But we bet that the rover is insanely jealous of the laser used by Japanese researchers that not only zaps rocks, it turns them into a magma and sends an intense shockwave through them, mimicking a giant impact event.

In a paper published today in Science Advances, researchers found that by zapping a mineral called forsterite with a high-powered laser, they were able to melt the rock sample and send a shockwave through the material, creating pressures similar to those found at the Earth’s core.

Forsterite is a common mineral often found inside terrestrial or rocky planets. If researchers can figure out how it behaves when a large body, like another planetoid or moon slams into a forserite-rich planet, they can figure out how our planet developed. This research suggests that those early impacts would have been enough to help separate out components of different materials into the layered structure of the interior of the Earth.

Earth has several different layers; the thin rocky crust that makes up all ocean floors and continents, the thick mantle, and a heavy core.

“Our results can support the possibility that violent, large-scale collisions between space bodies containing enough forsterite and moving faster than about 13 kilometers per second (8.1 miles per second) could lead to chemical layering in the mantels [sic] of massive terrestrial planets,” said Toshimori Sekine, lead author of the paper.

Not only that, but forsterite can break down into magnesium oxide, which can turn into a metallic solid at high temperatures and pressures, potentially helping to create our magnetic field, which protects Earth from solar radiation. “Melting forsterite may have produced a sufficiently high concentration of magnesium oxide in early Earth’s core to power a magnetic field around the planet.” Sekine said.