If researchers can crack the chemistry, the applications are numerous. 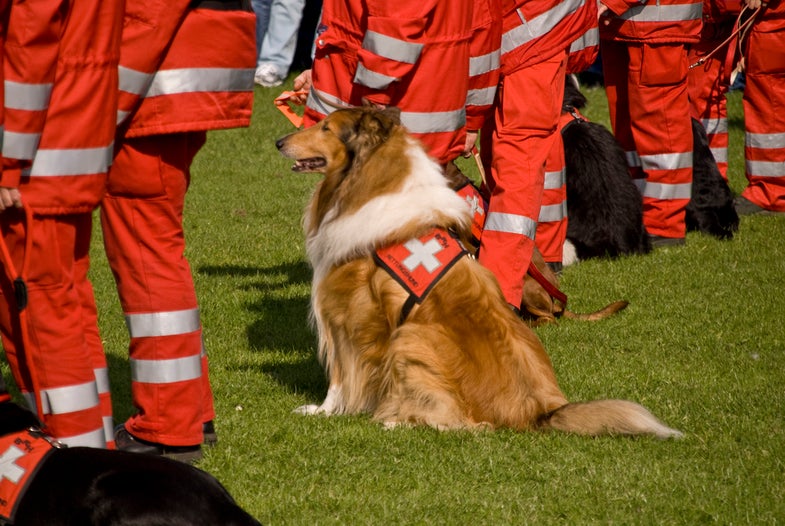 As Hurricane Harvey ripped through Texas and neighboring gulf states in August 2017, leaving a record-breaking 30 million gallons of quickly-dirtied water in its wake, the Federal Emergency Management Agency, more commonly known as FEMA, moved into position. Among the personnel from federal agencies as varied as the Department of Health and Human Services and the Coast Guard were numerous Urban Search and Rescue teams—experts in finding people in the midst of a large-scale crisis, whether they’re stranded on a roof, or trapped deep beneath the rubble.

For all their expertise, these responders aren’t going it alone. They’re equipped with listening devices, heat detection equipment, and, most importantly, some loyal sniffers. “We use the dogs [as] locating tools,” says Scott Mateyaschuk of the New York Police Department’s K9 unit. “The dogs will locate live human scent under structural collapse.” In his work for FEMA, which is fundamentally a constellation of emergency response experts who mobilize in a crisis, Mateyaschuk also helps to train and deploy disaster dogs across the country.

While canine units are a tried and fairly true method for identifying people trapped in the wreckage of a disaster, analytical chemists have for years been working in the lab to create a robotic alternative. A synthetic sniffer, they argue, could potentially prove to be just as or even more reliable than a dog, more resilient in the face of external pressures like heat and humidity, and infinitely more portable. (As of this writing, you can’t hoist a dog with a drone.) But for all the excitement in academia, those on the ground remain skeptical.

Humans have utilized canine noses since at least the Middle Ages. Police dogs originated with medieval parish constables who, in addition to maintaining the palace, used bloodhounds, called “slough dogs” or “sleuths”, to hunt down outlaws. Seventeenth century monks living in Switzerland’s Great St. Bernard Pass used dogs to find pilgrims lost in the snow. The life-saving dogs have since been bred with other canines, leading to a heavier, jowlier descendant, the St. Bernard. By the turn of the 19th century, more scientific efforts to train canine units were underway. Ghent, Belgium established what is considered the first police dog training school in 1889. By World War I, the military began to train dogs to locate wounded soldiers.

A thousand years later, the basic technology—that is, the dogs—remains much the same. Dogs have incredible olfactory abilities, with 100 times greater density of smelling cells in their nostrils than in the meager human nose. While humans breathe and smell through the same system, when a dog breathes in or out, the air travels through two different pathways, one for breathing, the other solely for smelling. They have another secret, too: a pheromone-detecting apparatus humans seem to lack altogether. Taken together, this specialized snout allows dogs to perceive odors in parts per trillion—an infinitesimal amount that comes in handy when their human handlers need them to identify the smallest whiff of a lost person.

That means the key difference between search dogs of yesteryear and now is training. Taking all of the regional groups together, Mateyaschuk says, FEMA’s total canine headcount numbers around 285 “live find” canines, which are trained to bark when they discover a living person, and 85 cadaver dogs, expert in identifying the deceased. The dogs are from a variety of breeds: About 60 percent are Labrador Retrievers. The next most popular are Belgian Malinois, which constitute about 14 percent of FEMA-affiliated dogs. Other agencies have their own dogs: the Transportation Security Administration, or TSA, has 1,000 dogs for deployment in airports across the country, for example. Dogs are also trained to track down invasive species and preliminary research is assessing their ability to detect cancer.

Urban rescue dogs vetted by FEMA must complete a lengthy training course and have to pass a post-graduation verification process before they can go out in the field. The whole process sometimes takes as long as two years to complete—and that’s assuming they even get a shot at all. These days, prospective canines are aggressively vetted (pun intended). “Post-9/11, we’ve really dialed into testing the dogs prior to going into these different programs,” Mateyaschuk says. They look, first and foremost, for what he calls a “hunt drive,” which could also be described as a pathological need to please. While any dog could stand to learn something from urban search training, the basic drive to find something—anything—in exchange for a reward can’t be taught.

Measuring the true success of these elite urban rescue K9s remains difficult, as the only way to know if a dog successfully identified every endangered person is through an entrapment simulation. In a real-life scenario like Hurricane Harvey or the Boston Marathon Bombing, dogs can only really be measured by the number of people they do find; the number of people they don’t find may never be known.

However, research that has been conducted on urban rescue simulations is heartening. One 2015 study, published in the journal Wilderness and Environmental Medicine, analyzed 25 experiments over four months with 10 dog and trainer pairs in England. The researchers found a 76.4 percent success rate among dogs in a simulated search and rescue environment, though they noted that some of the success was undercut by a high false positive rate—the dogs sometimes barked at the wrong thing, which, in theory, could delay them from identifying the right thing. Other experimental research of dogs in simulated search environments has found success rates as high as 95 percent.

“What’s very unique about the canines is their ability to cover a large area of collapse in a very short period of time,” says Mateyaschuk. “There really has been no technology—yet—that can do that.”

While Mateyaschuk and the rest of the canine handlers associated with FEMA are satisfied with—even proud of—the work their dogs do, some scientists think search and rescue robots might one day provide a faster and more effective way of identifying victims in disasters. Assuming they can get the nose right.

Sotiris Pratsinis is a professor of process engineering and material science at ETH Zurich, a science and technology university in Switzerland, about 3 hours north of the Great St. Bernard Pass. In a recent study in the journal Analytical Chemistry, Pratsinis and his colleagues shared the results of a preliminary study on a portable device that sniffs out humans in entrapment situations.

Less like a robotic search and rescue dog than a metal box with an array of sensors, the system Pratsinis helped to develop detects chemicals common in human breath and skin, like acetone, ammonia, isoprene, and C02. It also detects shifts in relative humidity as the human mouth is typically much more moist than the surrounding environment. In theory, if one or more of these chemicals were identified in a concentration higher than background rates, a search and rescue team would know a human being was in the vicinity, even if they were trapped far below.

“In an earthquake, you have a significant area to cover,” Pratsinis says. “You have an hour to save people, because after that, the survival rate become [smaller and smaller].” He imagines a day where the sensor array is made portable. That way, a first responder could hold it in their hand as they comb the disaster site, or they could suspend the device from a drone—a relatively recent addition to the FEMA toolkit—for even faster deployment. While dogs need rest and water in the midst of a search, Pratsinis notes his metal box will never tire.

For now, though, the device is confined to the laboratory. In this initial study, participants were placed in a sterile plexiglass box for observation. Researchers looked first at chemicals released from their lungs, then at chemicals emitted from their skin, and finally at all of the chemicals released from both skin and lungs. The researchers found that, in particular, their sensors detected parts per billion of acetone, ammonia, and isoprene “with high accuracies… and precision, unprecedented by portable sensors.”

Pratsinis is hopeful that with more research—and more research dollars—a portable sensor device like this could eventually be brought to market. Other researchers are working on similar projects, including mimicking canine respiration patterns, as documented in a 2013 PopSci feature by Josh Dean. But how long it will take before we see these technologies in the field is anyone’s guess. “We would love to make big claims,” he says, but, right now, “the sample size is too small.” The same is true for similar human chemical detection efforts, like other analytical chemistry research aimed at one day identifying human trafficking victims on ships in port with a similar sensor array.

But agencies like FEMA, which would ostensibly be the main users of such a device, aren’t certain it’s necessary, or feasible. The fact that search and rescue teams are stationed around the country, typically coming together only in times of crisis, means standardization is important. Everyone must be trained the same way with the same device, which means the agency is methodical—perhaps even slow—in incorporating new equipment. That’s especially true given FEMA doesn’t really have its own research and development arm. Instead, it relies on external exploration committees, and regularly partners with another federal group, the National Institute of Standards and Technology, to review new technologies.

What’s more, Mateyaschuk believes in the efficacy of FEMA’s existing noses: the search dogs. “Over the last 13 years that I’m involved with this system, there’s been different things that have come along that have not been able to capture the unique olfactory experience that the dog has,” Mateyaschuk says. “Something to be said about the dogs is, if it’s not broke, don’t fix it.” And while Pratsinis is invested in the future of smelling devices, he acknowledges canines still have a competitive edge. “I wish we knew what the dogs were picking up,” he says. “The dogs don’t tell us.”