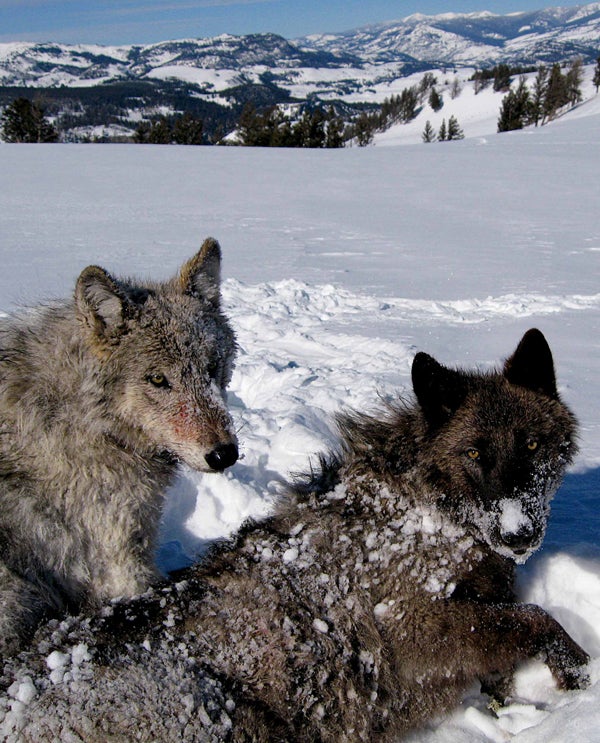 Displaying distinct coat color phenotypes, these two wolf pups from Yellowstone National Park's Agate Creek pack were born in the same litter resulting from the pairing of a black female with a gray male.
SHARE

Many millennia ago, man created dog. As the story goes, gray wolves in East Asia took to the comforts of human camp life somewhere between 15,000 and 40,000 years ago. People bred their new canine companions for docility and other favored traits. Dogs then accompanied humans crossing the Bering Strait into the Americas 12,000–14,000 years ago.

Our genetic tinkering, says a new study in today’s issue of Science, has left a dark legacy on modern wolves. Thanks to our domestication efforts, many North American wolves now have black and not their typical silver coats. Paradoxically, the trait may help wolves cope as we tinker with their natural habitat.

The international team of researchers argues that the trait of black fur was passed to North American wolf populations as they mated with domestic dogs, perhaps those that belonged to the first Native Americans. Genetic sequencing by the researchers showed that both black wolves and black dogs lack three units of DNA on one chromosome. In wolves, this mutation suppresses a gene on a separate chromosome that is linked to gray coat color.

Black wolves are common in forested habitats such as Yellowstone National Park. But they’re rare in the snow-covered Canadian tundra, where gray and white coats prevail. “This work may provide an explanation,” said University of Calgary-based co-author Marco Musiani in a press statement. As climate change and human development deplete snowy habitat for wolves, we may see more “black sheep” in northern wolf populations in the future. While the trait may confer better camouflage, geneticists offer another possible explanation: better immunity. The mutation for black coats is found in a type of gene that helps fight infection.

Whatever the reason, black fur “has proven to be a valuable trait for wolf populations as their Arctic habitat shrinks,” said Musiani. “It also shows that human activities can help enrich the genetic diversity of wild animal populations, which is a very unexpected finding.” In this instance, as humanity taketh away, it also giveth.