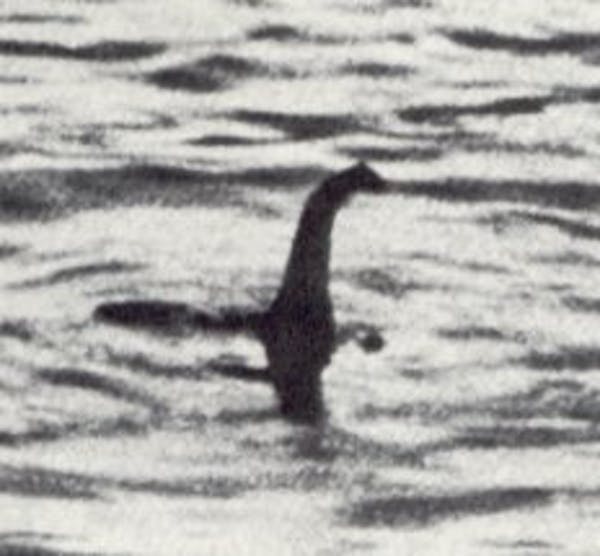 Scientists claim to have finally found a “plausible theory” for sightings of the Loch Ness Monster. She’s not an aquatic reptile left over from the Jurassic era or a circus elephant that got in the water to bathe with her trunk aloft. If Nessie ever existed at all, she was most likely a giant eel, according to a new scientific survey of the loch.

Starting with an Irish missionary’s report of a monster in the River Ness in 565AD, repeated sightings in the modern era have kept Scotland’s greatest myth alive. The most famous of which is a grainy photo from 1934 which appears to show the shadowy outline of a long-necked creature, bobbing on the water’s surface.

The hoaxed photo of the Loch Ness monster taken in 1934 by Colonel Robert Wilson. Until now, such glimpses were all people had to go on. But a new technique allows scientists to sample all the life contained within Loch Ness by gathering environmental DNA, or e-DNA as it’s known. This is genetic material that’s present in the cells of organisms and shed into their surrounding environment. Finding and identifying e-DNA can tell scientists what organisms are living in a habitat without them having to observe or capture them.

Speaking from Drumnadrochit, a village on the western shore of Loch Ness, scientists announced the results of their e-DNA survey of Loch Ness. The team took well over 200 one-liter samples of water from throughout the loch—including the surface and deep water—and compared them with 36 samples from five “monster-free” lochs nearby. Their census provides a list of all the species that call Loch Ness home—from bacteria to plants and animals.

What did they find?

The study detected over 500 million DNA sequences and 3,000 species. According to Neil Gemmill of University of Otago in New Zealand, who led the study, there are no DNA sequence matches for shark, catfish, or sturgeon. That rules out a large exotic fish in the loch.

There are DNA matches for various land-living species that you would expect to see around Loch Ness, including badgers, deer, rabbits, voles, and different birds. Sheep, cattle, and dogs appear on the record alongside humans too. This suggests that the sampling is pretty good at picking up species that would only rarely visit the water—so it should be able to detect a monster living permanently in the loch.

The most popular representation of Nessie is as a plesiosaur—an ancient long-necked marine reptile that died out alongside the dinosaurs in the last great mass extinction 65 million years ago.

Scottish geologist Hugh Miller discovered the first British plesiosaur bones on the Scottish Isle of Eigg in 1844. But according to Gemmill, there’s “not a single reptile in our vertebrate data, and nothing that sat in the expected place that a plesiosaur [DNA] sequence might be predicted to lie—somewhere between birds and crocodilians”.

The most likely candidate for Nessie that has surfaced in media reporting of the research is a giant eel. This appears to be based simply on the fact that eel DNA was detected at “pretty much every location sampled” in Loch Ness.

Plenty of eel DNA doesn’t confirm that Nessie is a giant eel—only that there are lots of eels. Scientists don’t have monster DNA to compare with anything they found in the loch and so no one can say for sure if there is or isn’t a monster there. But the absence of anything unusual in the DNA record of Loch Ness suggests there’s nothing to get excited about—and that includes a giant eel.

What next for Nessie?

If Nessie doesn’t exist, why do eyewitness accounts of the Loch Ness Monster persist? The answer is likely to be a psychological phenomenon called “expectant attention”. This happens when people who expect or want to see something are more likely to misinterpret visual cues as the thing that they expect or want to see.

This likely also happens with recently extinct animals. The last known Tasmanian tiger died in 1936 and exhaustive scientific surveys have failed to turn up any evidence that they’re still out there. Even so, people often still report seeing them.

Still, Gemmell acknowledges that there is uncertainty. Seals and otter—two species known to appear in the loch at least occasionally—weren’t detected, while 20% of the DNA collected was “unexplained.” That’s normal for an e-DNA study, but it does leaves room for a monster.

A YouGov poll in August 2018 found that 24 percent of Scots believe that Nessie exists. First Minister for Scotland Nicola Sturgeon is apparently among them.

Science being science, we can never say with total confidence that there is no Loch Ness Monster. The Loch’s thriving tourism industry can still count on a little mystery to attract true believers. Rest easy, monster hunters. Nessie lives on.

Jason Gilchrist is an ecologist at Edinburgh Napier University in Scotland. This article was originally featured on The Conversation.