It was misidentified as a cow's at first, but then turned out to be from one of the oldest horses in the Americas. 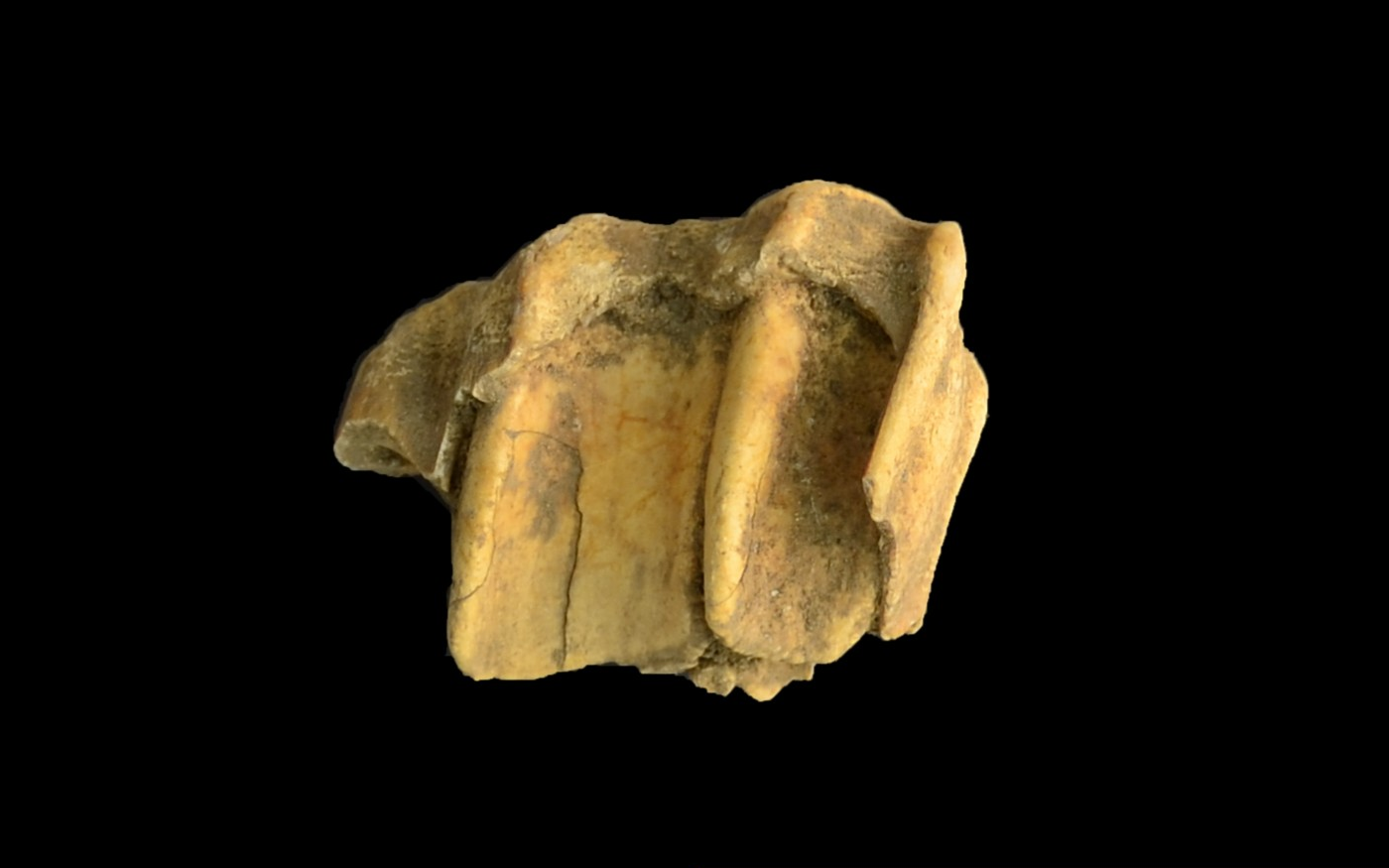 This 16th-century horse tooth found in Haiti could reveal more details about the fabled origins of domesticated horses in the Americas. Nicolas Delsol/CC-BY 4.0
SHARE

The 1947 children’s novel Misty of Chincoteague opens with a dramatic account of a small herd of horses escaping from the wreck of a colonial-era Spanish galleon. According to local folk stories, these same hardy animals thrived on the islands of Chincoteague and Assateague, which lie off the coasts of Maryland and Virginia.

Scholars have long debated the likelihood of this origin story about the population of feral ponies that have made the islands famous. A new genetic analysis of a 16th-century horse tooth from the Caribbean doesn’t settle this question, but does offer some indirect support for the shipwreck tale’s plausibility.

Researchers found that the tooth fragment, which was discovered in present-day Haiti, belonged to a horse of southern European origin. Additionally, the specimen is most closely related to the Chincoteague pony breed, the team reported today in the journal PLoS ONE.

“This helps us to have a better idea of what the origins of these early colonial horses are,” says Nicolas Delsol, a zooarchaeologist at the Florida Museum of Natural History in Gainesville and coauthor of the findings. “There is some documentary evidence from the historical literature stating that horses were boarded in southern Spain, where most of the first expeditions came from, but it’s always interesting to see how accurate these early colonial chronicles are.”

Michelle Delco, an equine orthopedic surgeon and assistant research professor at the Cornell University College of Veterinary Medicine who wasn’t involved with the research, said the findings “fill in a major gap.”

“There is a lot of historical evidence that the modern domestic horse was introduced to the Americas from the Iberian peninsula around 1500, but we have surprisingly limited archeological and scientific evidence about this,” she said in an email.

The horse family (whose members are known as equids) evolved in North America roughly 50 million years ago and spread to Eurasia around 2.5 million years ago. Equids disappeared, along with many other large animals, from the Western Hemisphere around 10,000 years ago. In the late 15th century, however, domesticated horses were brought to the Americas during the European invasion.

“Because they were so central to the European lifestyle, they brought [the horses] with them,” Delsol says. “They first were introduced in the Caribbean islands, where the first European settlements were, and then diffused throughout the continent along with the developments of European colonization.”

The tooth he and his collaborators analyzed was excavated in 1980 from a 16th-century town known as Puerto Real on Hispaniola, the island shared by the Dominican Republic and Haiti. The specimen dates to a period when occupation was sparse after Spanish authorities ordered the island’s northern ports abandoned in the 1570s in response to persistent pirate raids and smuggling.

The tooth fragment was initially misidentified as belonging to a cow. But when Delsol examined DNA from the specimen, he realized that the tooth actually came from the molar of an adult horse. “Since it was the earliest horse genome that we had, we decided it was worth working a bit more on it and seeing what it could tell us,” Delsol says.

He and his team investigated a kind of genetic material known as mitochondrial DNA, which is passed down only through the maternal line. Mitochondrial DNA isn’t confined to the nucleus of a cell, which means it’s more abundant and easier to collect from ancient samples than nuclear DNA, Delsol says.

“Domesticated horses originated from a relatively small number of male ancestors and a great diversity of female ancestors,” said Delco, who studies the role of mitochondria in health and disease. “So, by fully reconstructing the mitochondrial genome of this early Caribbean horse, the authors could very specifically ‘place’ this individual in space and time—meaning both in the context of its origins from the Eastern Hemisphere, as well as its closest relatives among modern horses in the Americas.”

The researchers determined that their specimen represents the oldest complete mitochondrial genome of a domestic horse in the Western Hemisphere. When they compared the Puerto Real horse’s genetic material with that of other breeds from around the world, the team concluded that it belonged to a group whose members are found in Central Asia, Southern Europe, and the Middle East—but not northern Europe. This suggests that the Puerto Real horse hailed from the Iberian Peninsula, which is occupied by Spain and Portugal.

Additionally, the Puerto Real horse’s closest relatives turned out to be the feral ponies of Chincoteague and Assateague. This doesn’t necessarily mean that the ponies’ ancestors fled from a Spanish shipwreck, Delsol emphasizes, but it “gives more historical accuracy to this story.”

Delco, who grew up reading the tale of Misty of Chincoteague, was excited to see a study put actual data and genetic findings behind these fables. “At the age of about 10, I persuaded my parents to take me to the Assateague Island National Seashore and will never forget the rainy, sandy week we spent with the wild ponies,” she said. “This scientific manuscript suggests the legendary origin story of the Chincoteague pony is true. It’s not often that reading a science paper gives me goosebumps.”

Beyond folk stories, Delsol adds, the ties between this Caribbean horse and the Chincoteague ponies may reflect an early Spanish presence along the Atlantic coast of North America.

[Related: Ancient wolf DNA is being used to sniff out where our love story with dogs began]

“What we consider the different colonial spheres of influence—the French, the British, the Spanish—at that time weren’t completely watertight,” Delsol says. “Everybody was pretty much everywhere.”

However, the team acknowledges that the findings focus on a single horse and only include its mitochondrial DNA, which means that the tooth  “only gives us the story of the maternal lineage,” Delsol says. “To be more thorough, we would include an analysis of the paternal lineage.” Although DNA degrades more quickly in tropical climates, he’s successfully extracted snippets of nuclear DNA from similarly-aged cattle specimens and suspects it will be possible to do the same with the Puerto Real horse. Delsol and his team also plan to expand their analysis to the remains of other horses from Puerto Real.

The findings demonstrate how fragments of genetic material from organisms that died a long time ago, known as ancient DNA, can shed light on historical events.

“Ancient DNA is quite often associated with very remote periods of time and really ancient specimens, but it can also be pretty useful to clarify more recent history,” Delsol says. “Part of this history is the colonization of the Americas and how animals were a central part of the establishment of Europeans on the continent.”