An evolved Homo erectus still lived in Indonesia around 100,000 years ago. 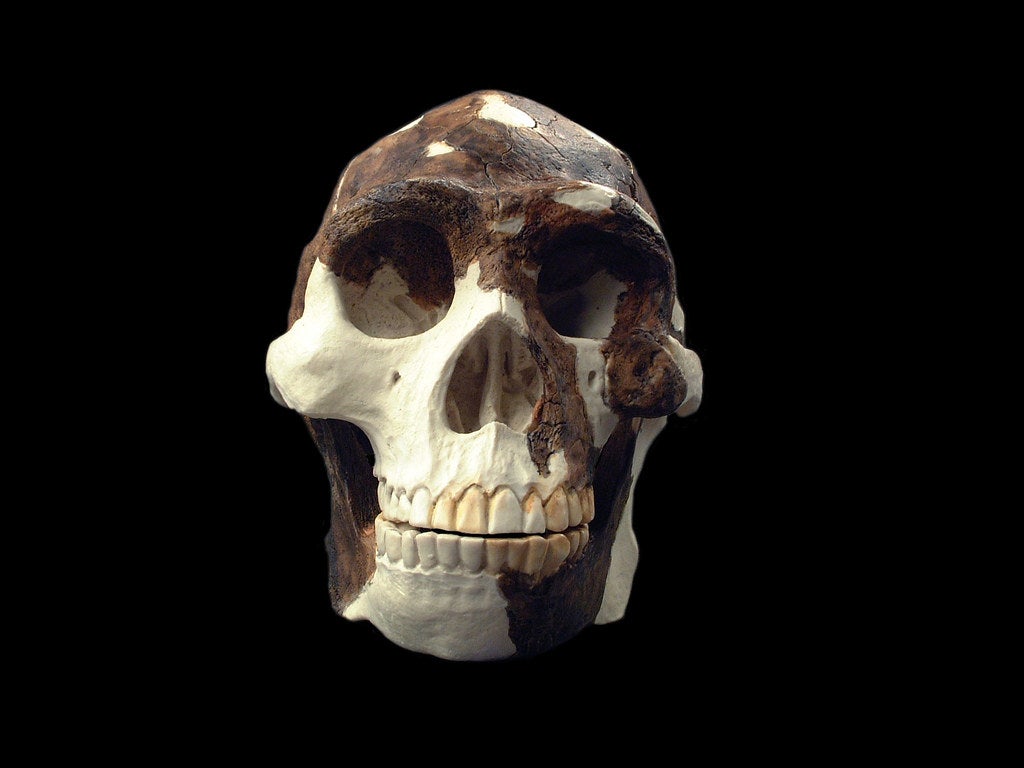 Skull of a Homo erectus, which were found to be living in Java up until about 100,000 years ago. NCSSM
SHARE

One of our ancient cousins, the Homo erectus, started colonizing the world two million years ago—roaming from Africa into Asia and Europe. These hominins are known for being the earliest of our ancestors with human-like body proportions and the ability to walk (and possibly even run).

Anthropologists estimated that H. erectus died off around 400,000 years ago, much before Homo sapiens evolved in Africa around 100,000 years later. But that estimate has always been a bit fuzzy — did every last H. erectus really die off when they appeared to vanish from Africa hundreds of thousands of years ago?

Nearly a century ago, Dutch researchers discovered twelve H. erectus skulls and two lower bones in Ngandong in the volcano-ridden Indonesian island of Java. These findings represented the youngest and most advanced specimen of the species ever found, but dating them has been a guessing game.

According to a new study published in Nature, a further dating analysis of the river landscape in that same area has concluded that these ancient humans were still walking around Java 108,000 to 117,000 years ago.

“Nowhere else in the world does the Homo erectus persist as long as in Java at Nandong,” corresponding author and paleoanthropologist Russell Ciochon from the University of Iowa in Iowa City told Popular Science.

The hominins likely found their way to Java via a land bridge between mainland Asia and the island during a time when glaciers were large and expansive and sea levels were low, he says.

While this evidence shows these ancient people wandered around for quite some time, there still isn’t any evidence that H. erectus survived long enough to hang out with modern humans on Java. Still, it’s possible they shacked up with other hominins. Genetic evidence indicates that the Denisovans, a subspecies of archaic humans also in the genus Homo, interbred with both modern humans and an older species, passing on a tiny amount of residual signal of ancient mysterious DNA.

That older species is likely H. erectus. “Homo erectus was the granddaddy of all early hominins, including Homo sapiens,” Ciochon says.

Homo floresiensis, another kind of early human, is likely a dwarf of the H. erectus that island-hopped in Southeast Asia, and Homo luzonensis could also have been a spin-off species, Ciochon says.

All three of them probably lived and continued to evolve at the same time on separate islands, as this new research shows that the Java H. erectus looked different and more evolved from it’s older African relatives.

“Species can be ancestors of other later species and still persist,” he says. In another corner of the world, African H. erectus potentially had given rise to Homo heidelbergensis and eventually Neanderthals.

So what brought about the demise of H. erectus on Java? Ciochon says it was likely climate change. A bunch of bones from animals found in open woodland environments, similar to Africa, were found alongside the fossils. The ecosystem changed into the rainforest that it is today — and it’s likely H. erectus wasn’t able to adapt. Of course, it’s impossible to know precisely when the species died out, but these young fossils are certainly a clue.

For Phillip Rightmire, a paleoanthropologist at Harvard who was not involved with the study, this new research clears up a potential end of the timeline for this species.

But when one story ends, it opens up even more questions and possibilities about the origin of a species that potentially plays a significant role in our other ancient human relatives’ evolution.

“Each time we find new fossils, and each one it seems not to clear up the story,” Rightmire says, “but make it yet more complex.”