Daily Infographic: A Family Tree Of Every Bird On Earth

This family tree reveals that species formation has sped up in the past 50 million years, especially in the western hemisphere. 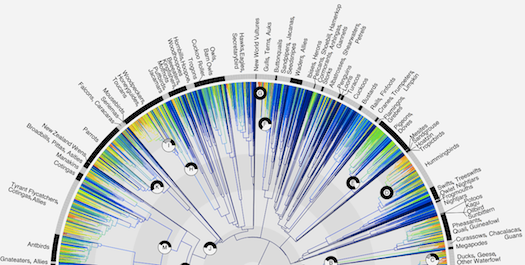 All Of the Birds

The family tree of all birds. . See a zoomable version here.

This gorgeous infographic is the first family tree linking every bird on Earth, revealing how birds have evolved since the dinosaur age.

The map shows where and when birds lived, which offers a glimpse of species diversification around the planet. One big takeaway: Birds have been diversifying at an increasing rate in the past 50 million years. Today, 9,993 living species are known.

This is significant, because it runs counter to a prevailing view in biodiversity circles, the study’s authors say. “A new distinctive group, like bumblebees or tunafish, first evolves, and, if conditions are right, it quickly radiates to produce a large number of species,” says co-author Arne Mooers of Simon Fraser University in Canada. “These species fill up all the available niches, and then there is nowhere to go. Extinction catches up, and things begin to slow down or stall. For birds the pattern is the opposite: Speciation is actually speeding up, not slowing down.”

Another surprise from the data: The greatest diversification is not in the tropics, but in the western hemisphere. Biologists have long thought the tropics would play host to the greatest range of speciation. After all, that’s where you find birds of paradise. But apparently, diversification rates are higher in North America, Eurasia and southern South America.

The authors have a couple ideas about why this is. First is the appearance of key adaptations in species like songbirds, parrots and hummingbirds, leading to diversity as the animals evolve to fit specific niches. Second is a previously unknown radiation among ducks, geese and some gulls. Radiation in this case means adaptive radiation, the evolution of new phenotypes.

To build the family tree, the team relied heavily on fossil and DNA data, in addition to geographical information, according to a news release.

The paper is published this week in Nature.