Siberian unicorns lived alongside humans, and they were so much cooler than the mythical version 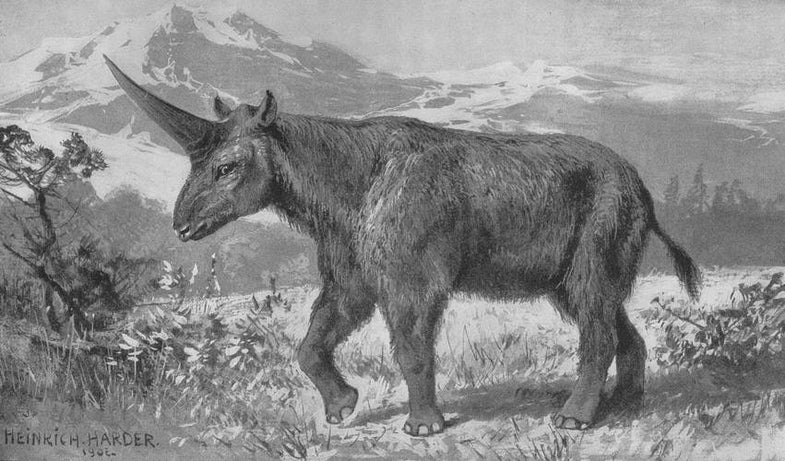 All rhinos are unicorns, really—they just aren’t pearly white and magical the way our myths say they should be. These powerful beasts get their strength from stocky muscles and keratinized body armor instead of rainbows and magic, but they’re the only unicorns we’ve got. And one extinct species is named accordingly: the Siberian unicorn.

Elasmotherium sibericum was the last remaining survivor of the Elasmotherium genus, which was once a large, diverse group of giant rhinos. Siberian unicorns were once thought to have gone extinct during a broad “background extinction” that occurred during the early and middle Pleistocene, which covers a period from around 126,000 to 2.5 million years ago. The species hadn’t been studied much, but it was previously thought that E. sibericum died out roughly 100,000 to 200,000 years ago.

But new research dating the fossilized molars of these ancient unicorns shows that they lasted all the way to the late Quaternary megafaunal extinction. That’s the scientific name for the event you know as the end of the last ice age when many retroactively beloved animals—saber-toothed tigers and woolly mammoths, for instance—died out as the climate changed. The paper, published this week in the journal Nature Ecology & Evolution, dates the most recent fossils to around 35,000 to 39,000 years old. Humans started widely dispersing just before the megafaunal extinction, so there’s been a lot of debate in the past about whether the widespread deaths of various species are due to overhunting or to climate change.

In this case, though, it looks like the increase in temperature is what killed off these giant beasts. The researchers note in this recent paper that Siberian unicorns had some extreme adaptations that limited their diet, so when vegetation began to change E. sibericum simply couldn’t change fast enough to survive. The lineages that begat modern antelopes and rhinos survived this extinction by evolving to eat a different diet, which they could do because they browsed and grazed on a variety of plants. Siberian unicorns couldn’t. Based on the angle between the back of their head and their palate (the bone on the roof of your mouth), researchers think Siberian unicorns held their heads even lower than modern rhinos. This allowed them to eat vegetation very close to the ground. But when their ecological niche disappeared, so did they.

The authors point out that extinction was especially likely because E. sibericum had a highly restricted geographic range, a small population size, and a low reproductive rate. Rhinocerotinae, the group that includes modern rhinos, survived while their Elasmotherium cousins died out. This paper also shows that the two groups had split long before, somewhere around 43 million years. Though they looked superficially similar, ancient rhinos were mostly part of a highly specialized group that simply couldn’t survive a massive shift in climate.

We know all of this now because this group of researchers decided to actually look at the evidence they already had in front of them. The 25 specimens they performed radiocarbon dating on were in various museum collections, but as they wrote in the study, no dating or genetic analysis had been done for the species. At last, these real-life unicorns are getting their day in the sun.