If that asteroid had been 30 seconds late, dinosaurs might rule the world and humans probably wouldn’t exist

The meek inherited the Earth instead 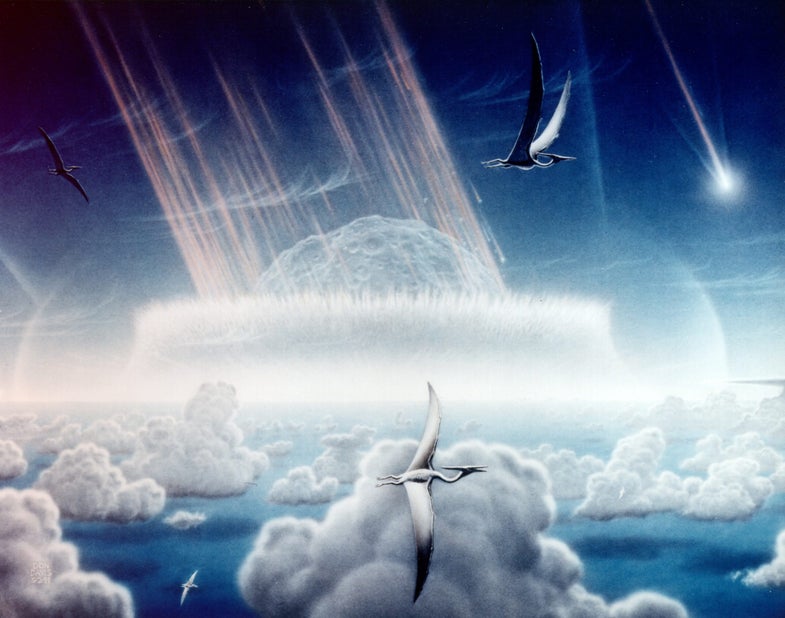 Location is everything, for both homeowners and dinosaurs. When you’re buying a house, it’s better for your long term happiness to find a neighborhood you like that’s close to work instead of having that extra living room. And when you’re a Cretaceous period dinosaur, it’s better for your long term survival to have a giant asteroid hit in the middle of the ocean instead of just off the coast of Mexico.

If that meteor had come just half a minute later, it would have hit somewhere in either the Atlantic or Pacific. Either location would have made some killer waves (literally), but at least it wouldn’t have killed as many dinos. Birds are cool and all, it just might have been nice to have some little raptors running around instead of chickens. They were about the same size anyway, so they couldn’t reach the doorknobs if we put them a little higher. These new findings came to light in a BBC documentary, The Day the Dinosaurs Died, featuring the scientists who have been drilling into the underwater crater. Back in 2016, geophysicists Jo Morgan from Imperial College London and Sean Gulick from the University of Texas drilled deep into the ocean floor to figure out more about the impact. They’ve been analyzing the samples they brought back ever since. The Lunar and Planetary Science Conference in March 2017 featured multiple presentations from the team, but surprisingly the news didn’t really spread until their findings hit mainstream TV.

It’s important to note before we get into more details that there’s no causal evidence here. One of the leading theories for the mass extinction of non-avian dinosaurs is that there was (at least one) massive impact event that caused a series of catastrophic outcomes that devastated the largest flora and fauna. But it happened 66 million years ago. The Chicxulub crater off the coast of Mexico has been dated to that same era, so the timelines match up, but it’s just still situational data. And the impact theory isn’t the only one out there. Paleontologists don’t all agree that the Chicxulub crater is responsible for the mass extinction, though the data does strongly support the impact theory.

So, assuming that in fact there was one big impact that killed off most dinosaurs, the meteor responsible hit near the Yucatan Peninsula, where it was free to kick up dust from vaporized rock and sulfur dioxide. Sure, plenty of feathered dinosaurs died from the explosive force of the asteroid hurtling towards them—it was equivalent to about ten billion Hiroshima-sized nuclear bombs—but lots of them died later, too.

Let’s not forget about the worldwide cooling that began with all that sulfur dioxide. Unlike greenhouse gases, sulfur dioxide has a chilling effect that caused many more deaths as the world began to freeze. The vaporized rock blacked out the sun and ushered in more snow than anyone really wanted to deal with (disclaimer: Popular Science cannot verify whether some Cretaceous species did in fact enjoy the snow. They may have frolicked and made snow angels for all we know). Lots of animals weren’t prepared for that kind of sudden cooling (they hadn’t invented Canada Goose jackets yet) but you know who was? Humans. Well, not humans, but the ancient mammalian ancestors of a lineage that would someday produce humans.

And thank god they did, because with dinosaurs out of the way our squishy bodies and pathetically helpless babies were free to flourish. Our tiny mammalian predecessors survived a mega-earthquake, a chorus of volcanic eruptions, acid rain, and watched most of the plants they ate die. And they lived to tell the tale. Again, not really, because in all likelihood they didn’t have a language sophisticated enough to communicate a story. Modern prairie dogs can talk about people’s shirt colors, but even they can’t spin a yarn about “that time almost everything died.” Probably.

Our very-distant ancestors were right there alongside ancient crocodiles and sharks and gosh darn it, they prevailed. We have since made it out of the food chain, with the exception of those people who try to befriend those godless killing machines: bears. And apparently, none of it would have been possible if that meteor had shown up 30 seconds later. The early bird catches the worm—but it still sucks for the worm.