Here are all the ways climate change will ruin your flight

Look forward to disruptions related to heat, wind, and water. 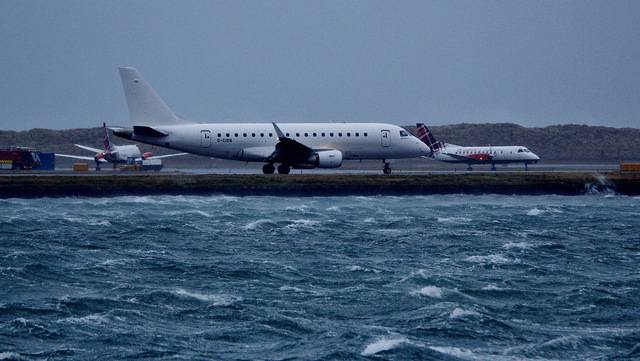 Flying is kind of a drag. There are plenty of routine hassles—the airport security lines, the cramped seats on the plane, the jet lag once you arrive at your destination—not to mention all the delays and cancellations you can’t predict.

And in coming years, air travel could become even more frustrating thanks to climate change. The jet stream is strengthening at high altitudes, which means that once you’re airborne, you’ll be more likely to encounter turbulence. And if you’re traveling from Europe to the United States—in other words, against the jet stream—your flight will probably take longer than today’s trips.

But wait, there’s more. The aviation industry will also have to contend with rising seas and more severe storms and heat waves. Disruptions that delay or ground planes and damage airports are going to become more common.

“Weather events in general are getting more extreme, and whether that’s temperature or storms or flooding or conditions associated with turbulence, those are all pretty negative for aviation,” says Ethan Coffel, a graduate student in climate science at Columbia University who studies extreme weather. “A lot of aspects of air travel will be impacted by this, and we have only begun to look at what the impacts will be and how we might adapt to them.”

Here’s what all this turmoil could mean for your plans.

Last summer, a heat wave in Phoenix caused more than 40 flights to be canceled as temperatures reached a scorching 119 degrees Fahrenheit. This mostly affected Bombardier regional jets, which weren’t certified to fly in temperatures above 118 degrees. Larger Boeing and Airbus aircraft were able to take off normally.

Even less intense heat can cause problems for airplanes, however. As temperatures rise air becomes thinner, making it harder for wings to generate enough lift during takeoff. Getting rid of some weight—in other words, carrying fewer passengers or less cargo—makes it easier for a plane to become airborne.

In future, around 10 to 30 percent of flights taking off during the hottest time of day will likely need weight restrictions, Coffel and his colleagues reported last year in the journal Climatic Change. The team examined 19 major airports around the world and climate projections for those areas in 2060 to 2080. They found that the temperature where flights start running into problems will depend on the type of plane and on the airport’s elevation and runway length. Higher altitude means thinner air, and shorter runways mean less distance for a plane to build up the extra speed it needs to take off on sizzling days. Long-haul flights will be particularly vulnerable since they have to carry full fuel loads, making them heavier. In some cases, 90 or 100-degree heat will be enough to prevent a plane from taking off at its maximum weight, Coffel says.

All this means that some airports will suffer more than others. New York’s LaGuardia Airport only has space for short runways. “You don’t actually need that high [of a] temperature to require weight restrictions,” Coffel says. Airports in Phoenix and Dubai have longer runways but get slammed with extreme heat. Phoenix Sky Harbor International Airport is also at a disadvantage because of its 1000-foot elevation.

On the other hand, airports in moderate climates with relatively long runways (such as New York’s John F. Kennedy International Airport, Heathrow Airport in London, and Charles de Gaulle Airport in Paris) won’t be affected much. “Airports in Western Europe basically don’t have this problem because it really almost never gets this hot,” Coffel says.

For flights that do need to lighten up, the average weight restrictions will likely range from 0.5 to 4 percent of the fuel and payload. For a Boeing 737, decreasing its weight by 0.5 percent would mean foregoing 720 pounds, or about three passengers and their luggage. “If you did that to a bunch of flights, that would cost a lot of money,” Coffel says. The longest flights operating out of hotter cities like Dubai already have to offer fewer seats if they are taking off during the hottest part of the day, but this will become more common in future years, he says.

The good news is that passengers probably won’t get hit with more baggage limits or higher fees; it’s more likely that airlines will just have to offer fewer seats on some flights, Coffel says. In rare cases, though, it might be so unexpectedly hot that a few passengers get bumped off a flight.

Airlines could limit the impact of extreme heat by installing longer runways. However, extending runways is expensive and there often isn’t room to do so in urban areas. Another solution would be rescheduling more long-haul flights to depart in the cooler parts of the day.

Airports will take a hit

The aviation industry is particularly vulnerable to the effects of climate change because it doesn’t take much of a disturbance in the weather to cause delays and rerouted flights. “The airplanes are operating on tight schedules, and if they get behind it can mess up the whole network,” Coffel says.

This fall, Hurricanes Maria and Irma caused mass travel disruptions in the Southeast and the Caribbean. “These are the kinds of events that climate change is expected to make more frequent and more intense,” says Rachel Burbidge, the policy officer for environment and climate change at Eurocontrol, an organization devoted to improving air traffic management across Europe. During a powerful storm, high winds can damage control towers and other equipment, while floodwaters inundate airfields, terminals, and underground electrical facilities, causing power outages.

Low-lying areas may also become permanently flooded. In years past, many airports were intentionally built in coastal regions. “You were moving the noise away from your cities and your communities,” Burbidge says. “Now the situation has changed slightly and we’ve got the risks of sea level rise.”

Other airports might run into trouble when blistering heat starts to literally melt the tarmac. In 2012, an airplane got stuck while trying to take off at Ronald Reagan Washington National Airport in Washington, D.C. The jet actually sank four inches into the runway. There’s also the risk that buildings designed for milder climates won’t be able to keep cool during heat waves, overheating equipment and endangering workers.

A few airports have already begun to prepare for these perils. After Hurricane Sandy unleashed 100 million gallons of floodwater at LaGuardia in 2012, the Port Authority of New York & New Jersey began investing in better drainage and protections for electrical facilities for the airport. Meanwhile, the new terminal planned for Newark Liberty International Airport in New Jersey will be designed with projections for future sea levels in mind. And JFK, which was flooded with salt water from Jamaica Bay and Bergen Basin during Sandy, is installing tide gates to protect its low-lying areas.

Elsewhere, the proposed third runway at Hong Kong International Airport will be protected by a 21-foot seawall and a drainage system designed for future floods. And in Norway, many of the airports operated by the state-owned company Avinor sit along the coastline; Avinor has decided to build future runways at least 23 feet above sea level.

Climate change or no, air travel is not going to slow down. The International Air Transport Association predicts that the number of passengers who fly each year will nearly double to 7.8 billion by 2036.

To keep things running smoothly, airlines will have to start planning for floods, heat waves, and other disruptions today. “A substantial challenge facing adaptation to climate change is the establishment of financing in order to support the development and implementation of adaptation projects,” Neil Dickson, chief of the environment standards section at the International Civil Aviation Organization, said in an email.

Flying will likely in many cases be more annoying and more vulnerable to disturbances as the impacts of climate change take hold. “And of course in the case of an Irma or Maria there is only so much you can do,” Burbidge says. “We’re never going to be 100 percent resilient.”

Still, she and other researchers are optimistic that aviation will be able to withstand the impacts of climate change. “Aviation has been dealing with disruptive weather for as long as we’ve been flying,” Burbidge says. “I certainly don’t think this is an insurmountable challenge.”

And we can still lessen these disruptions by cutting down our greenhouse gas emissions (skipping unnecessary flights is actually a great place to start). But we won’t be able to avoid them entirely.

“We’ll be able to adapt to these things, but it does have a penalty,” Coffel says. “You have to spend money just to maintain today’s performance, so in that sense [with] any adaptation, even if its successful, you’re still basically paying the cost of climate change.”