How It Works: 20-Yard Shootout

Since Nerf introduced its first dart gun, the Sharpshooter, two decades ago, the company’s engineers have struggled to find ways... 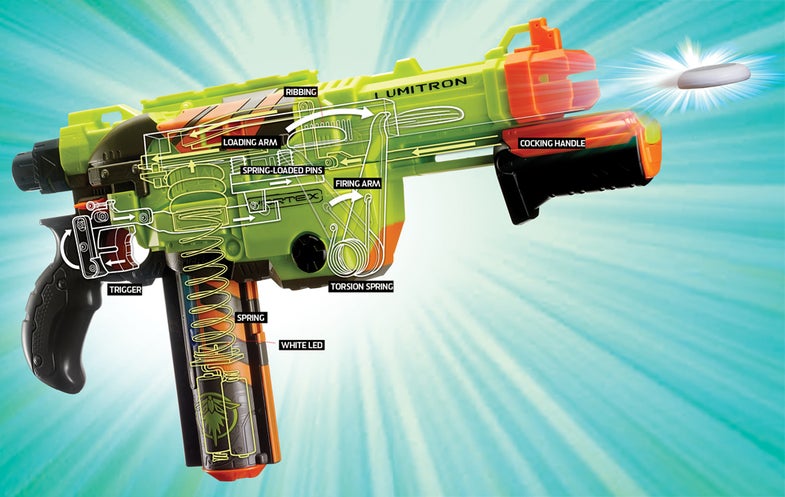 Since Nerf introduced its first dart gun, the Sharpshooter, two decades ago, the company’s engineers have struggled to find ways to significantly advance their toys’ range beyond the original 35 feet. They repeatedly refined the firing mechanism and even added motors, but even their best improvements only added about 10 feet. Last year, they redesigned both the launch mechanism and the ammo (discs, not darts). The range of the resulting Vortex line and its newest glow-in-the-dark edition, the Lumitron: 65 feet.

Nerf engineers experimented with 50 disc shapes before settling on the final design, which mimics the shape of a Frisbee. Each 1.5-inch disc consists of a domed core made from flexible plastic surrounded by classic Nerf foam. The designers set the bulk of each disc’s 2.6 grams on its bottom lip, creating a lowered center of gravity that keeps the flight path level. Nerf coated the entire disc with a quick-reacting, glow-in-the-dark phosphor that will last for at least 500 firings before wearing away.

The Lumitron’s 8.5-inch clip holds 10 discs. When a shooter slides the cocking handle backward, it pulls an attached plastic loading arm out of the loading chamber. With room open above, a spring at the base of the clip pushes the top round up into the chamber. Sliding the cocking handle forward pushes the same arm up to nudge the disc into firing position. A white LED at the base of the spring and four others near the top of the clip activate the glow-in-the-dark phosphor on the discs within two seconds.

Two spring-loaded pins attached to the trigger prevent shooters from firing non-Nerf objects, such as bottle caps and poker chips. One pin at the top of the firing chamber depresses when an object the exact height (half an inch) of the disc presses against it; another at the bottom of the chamber depresses when the width
requirement (1.5 inches) is met. If both aren’t depressed, the trigger can’t move.

Loading a round also readies the firing arm. One end of the four-inch plastic finger attaches to a torsion spring (similar to the ones in mousetraps). Cocking the gun pulls the finger back against the spring, and the finger’s tip catches on the trigger. When the shooter pulls the trigger, the finger springs forward and hits the disc, making contact slightly off center to start a counterclockwise spin.

The spinning disc generates a centrifugal force that keeps it flying straighter and therefore farther. To maintain the initial spin and flight path, engineers added about an inch of ribbing on the side of the barrel. When the disc runs along those ribs, it gains traction that keeps it spinning. In tests, Nerf engineers determined the ideal barrel length: 4.875 inches. If it were a quarter-inch longer, the disc would bounce too much in the barrel and lose speed. If it were slightly shorter, the disc could exit the barrel at an angle and wouldn’t fly straight. 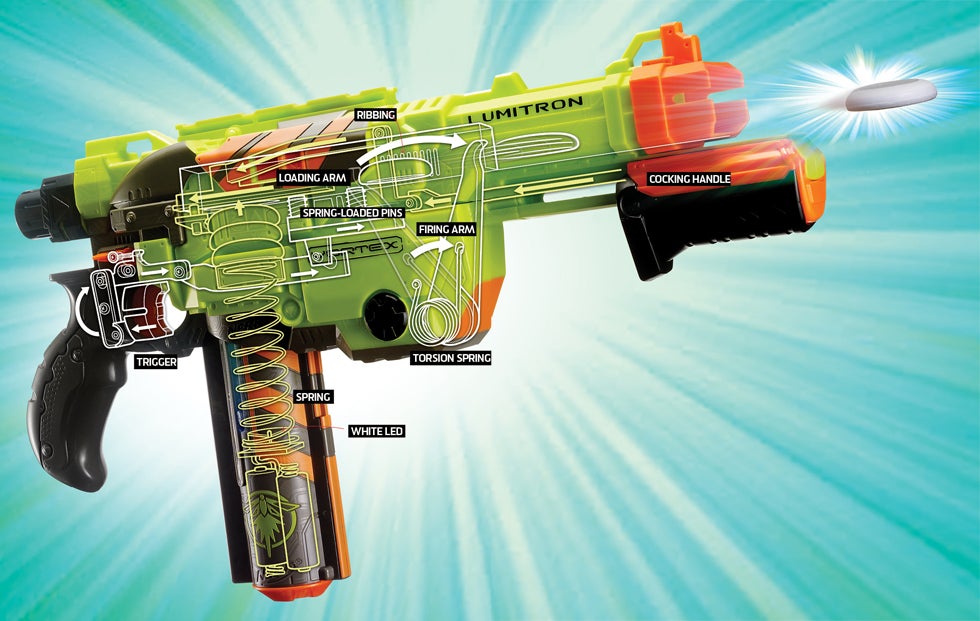