Deploying telepresence robots in a medical setting isn’t exactly a new notion, but a Singapore-based startup is easing the technology... 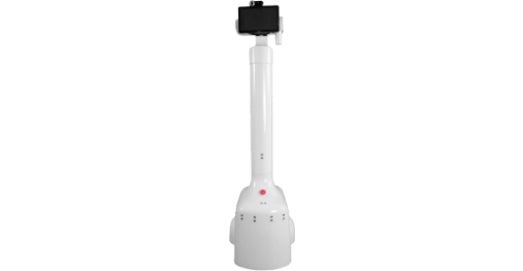 Deploying telepresence robots in a medical setting isn’t exactly a new notion, but a Singapore-based startup is easing the technology into the clinical setting in a clever way. While other telepresence platforms have largely focused on allowing doctors to examine patients and oversee care remotely, CtrlWorks envisions its Puppet as more of a remotely piloted assistant that will reduce doctor workloads, dutifully taking down case notes and filing them in the proper places as a doctor makes his rounds. And next month at Khoo Teck Puat Hospital in Singapore it will get a chance to prove its value.

Telemedicine is one of those potentially big businesses that hasn’t exactly taken off yet. It’s easy to see that potential; telepresence would allow fewer doctors to service more patients in more places, and with a layer of computerized intelligence added to the mix a robot can go a long way toward making sure protocols are properly followed, notes are properly filed, and nothing is overlooked (programs are really good at these kinds of tasks).

But a lot of people aren’t quite comfortable with telepresence technology just yet, and anyhow it’s probably not quite ready to take on the larger roles we envision for it. But robots like the Puppet appear to be a good start. Like many of its telepresence cousins, Puppet has a touchscreen LCD “face” that sits atop a mobile, remotely controlled body. A microphone and speakers allow for two-way communication, a camera relays visuals to the user, and a handful of sensors help it avoid collisions.

The basic idea is that a doctor can sit at a computer terminal in one place and make rounds via telepresence somewhere else, interacting with patients through the robot. But in order to help create a level of familiarity and comfort with the ‘bots, CtrlWorks is starting the Puppet off as a junior doctor. When it starts at the hospital next month, it will act as an assistant, following live doctors around on their rounds while controlled by a junior doctor–the one who would usually be scribbling copious notes while the senior doctor examines the patients.

In doing so, the junior doctors will still be along for the ride, soaking up the experience of their senior mentors. But they’ll also be familiarizing themselves with the robotic platform. The Puppet will be able to do some of the busy work like recording notes and filing them in the proper digital databases, freeing up the junior doctor to do other things. The more senior doctors also get to familiarize themselves with the robot assistants as well, and the most important party in all this–the patient–gets acclimated to the technology while still having their living, breathing doctors in the room with them.

All around, it doesn’t sound like a bad way to ease this kind of technology into the ward. Eventually, robot makers and medical personnel are going to want to shift toward autonomous assistants as well–robots that can follow them from room to room and handle the menial tasks without a human pilot, freeing up human personnel to focus on patient care. Plus, a robotic assistant–say, one imbued with a Watson-like ability to recall information and associate questions with the proper answers–would be like a mobile physician’s desk reference and medical records database rolled into one, giving doctors bedside access to more up-to-date bedside information than they could ever carry on a clipboard. Puppet is not anywhere close to that yet, but it has a foot in the door. It will be interesting to see how it performs in its new entry-level position.