IBM Photographs the Electric Charge in a Single Molecule

This is a molecule, and the circles represent how the electrical charge is distributed inside it. It’s a glimpse of... 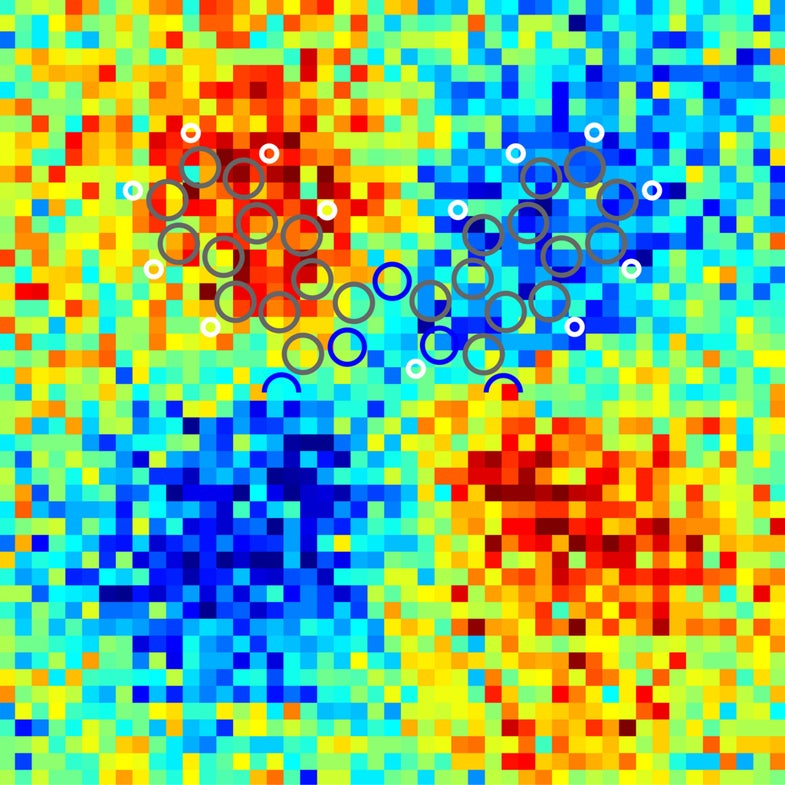 This is a molecule, and the circles represent how the electrical charge is distributed inside it.

It’s a glimpse of the forces that bind molecules together, essentially. This picture is a major breakthrough for nanotechnologists — understanding how charge is arranged inside molecules could help research in anything from solar energy to biology.

IBM researchers made this image using a new technique called Kelvin probe force microscopy, a different version of the more familiar atomic force microscopy that already gave us the first pictures of a molecule three years ago.

When it hovers over the molecular sample, the tip of the probe creates an electric field, which can be measured. The researchers were able to determine the electrical charges of the molecule by looking at changes in this electric field.

The colorful picture above represents the charge distribution in an X-shaped molecule called naphthalocyanine. It has two hydrogen atoms that are facing off, and when a voltage is applied, the hydrogens switch their configurations. This affects the way electric charge is distributed in the molecule, as the other atoms in naphthalocyanine have to re-jigger themselves so everyone stays together and happy.

Watching that dance can unveil how atoms behave at much higher resolution. This new method could be used to study charge transport in molecules used for computing and energy storage, according to IBM.

The research was published Sunday in Nature Nanotechnology.