In the nine years since the Humane Genome Project wrapped up, gene sequencing has gotten faster and cheaper at a... 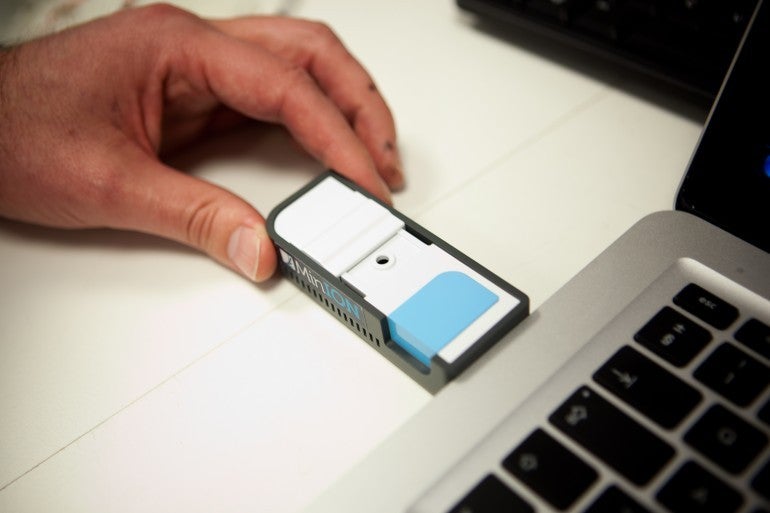 In the nine years since the Humane Genome Project wrapped up, gene sequencing has gotten faster and cheaper at a pace rivaling the computer industry. Now a technology company in the UK has another breakthrough, taking a cue from the computer industry itself: A cluster of fast individual compute nodes, so easily scalable that the company made a USB-powered disposable version.

The goal is to democratize sequencing and eliminate the still-heady costs associated with genetic analysis, making DNA and protein sequencing as commonplace as an exam with a tongue depressor.

Oxford Nanopore Technologies Ltd. uses a proprietary nanopore detection system to seek out and study molecules. Nanopores are organic molecules with a hole in them, embedded in a polymer membrane. The membrane’s electrical field allows individual strands of DNA to pass through the nanopores, and the disruption in current through the nanopore can be analyzed and matched to base pairs.

The company uses this setup in two configurations: the GridION system, which consists of nodes filled with disposable test cartridges containing multiple nanopores, and the MinION, designed for portable analysis of single molecules.

Each GridION node and cartridge is initially designed to deliver tens of gigabytes of data every 24 hours. Initially, the company intends to make 2,000-nanopore cartridges, but has plans for a 20-node installation using an 8,000-nanopore configuration. The latter would be expected to deliver a complete human genome in 15 minutes, the company says.

MinION is much smaller and can sequence up to 150 million base pairs in six hours. It uses blood, plasma and serum for sample analysis, like other lab tests, and it doesn’t need polymerase chain reaction amplification techniques to work. It will be on sale for $900 later this year, according to the company.

With technology like this, fast, sub-$1,000 genome sequencing could become commonplace.