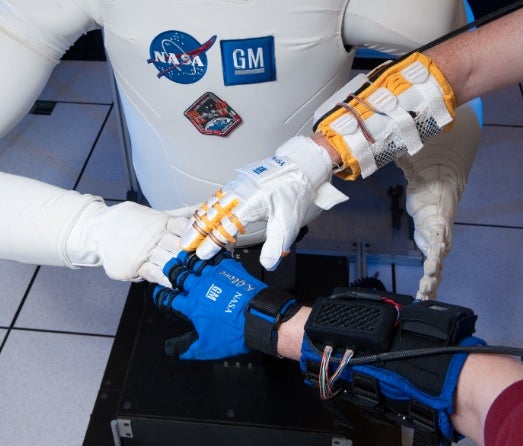 If you’ve been following the Twitter account of our favorite robot (and the only humanoid) in space, then you know Robonaut 2 is out of the box and getting to work aboard the International Space Station (this morning it is using a tool to take air velocity measurements). But R2’s technological contributions extend further than the ISS. Using technology developed for R2’s hands, a partnership between NASA and General Motors has unveiled a new robotic glove that gives humans a stronger grip.

The Human Grasp Assist, known informally as the K-Glove or Robo-Glove (can we call it the Power Glove?), taps R2’s robotic hand dexterity technology to give astronauts, auto workers, and other humans a stronger grip while reducing the risk of repetitive stress injuries. One of R2’s main design requirements dictated that the robot be able to work with tools designed for humans so that humans and robots working side by side could share a toolbox. That means R2 needed hands with a lot of dexterity–something that could at least mimic the biological dexterity built into human hands.

Using cutting-edge sensor and actuator technology, R2’s hands were imbued with a keen sense of touch and a set of mechanical tendons very similar to those in the human hand. Researchers quickly realized that this very same technology could be used to augment human hands.

Thus emerged the Robo-Glove. Pressure sensors in the fingertips of the glove detect when the user is trying to grasp something, causing actuators in the upper portion of the glove to retract the synthetic tendons, pulling the fingers into a gripping position and holding them there until the user relaxes his or her grip on the object. This means in a situation where a human hand would normally need to exert 15 to 20 pounds of force it now might only have to exert five to 10 pounds of force.

Not only does that cut down on fatigue, but for auto workers or other humans engaged in repetitive tasks it could cut down on repetitive stress injuries. The current prototype weighs only two pounds (minus the battery, which is clipped onto the user’s belt), but a third -generation prototype is nearing completion that will condense everything down even more.