When studying animal behaviors, biologists generally have to wait for something to happen — either for an animal to do... 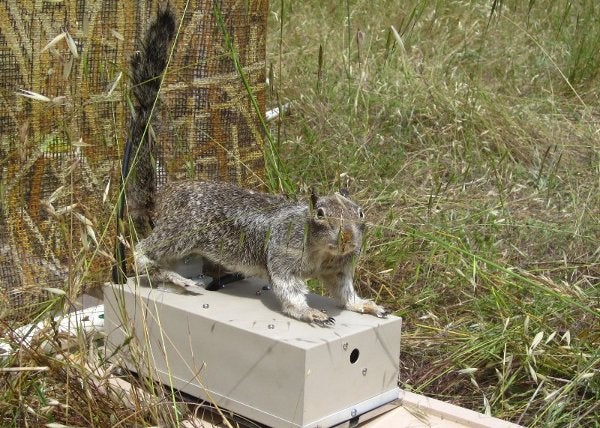 When studying animal behaviors, biologists generally have to wait for something to happen — either for an animal to do something, or for one animal to provoke another. Alternatively, they could use robot animals, tempting them with sexy fembots, mama-bots or tasty prey. Meet RoboSquirrel, an example of the latter.

It’s a robotic squirrel invented to help researchers study the interactions between California ground squirrels and rattlesnakes. The squirrels can resist rattlesnake venom, but they have also adapted to confront their attackers, staring down the snake with their tails wagging furiously. Kind of like how humans have been told to run, shouting and flailing, toward an approaching mountain lion.

Researchers at San Diego State University and the University of California-Davis wanted to study how snakes respond to this behavior, but putting a live decoy squirrel in harm’s way wasn’t really an option. So they built RoboSquirrel, a taxidermied actual squirrel that is stored with live squirrels so it smells real. The body and tail are heated with copper wiring, so the snake can see the squirrel’s heat signature as if it were real. The tail is controlled by a linear servo motor that makes it wag back and forth.

Rulon Clark of SDSU is using RoboSquirrel to test snakes’ behavior in response to the tail wag. The theory is that tail wagging discourages an attack, while a silent, creeping squirrel provokes one. Apparently, it works, according to the video below. Make sure to watch to the end, where a slowed-down portion gives an awesome glimpse of the rattler’s enormous fangs.