How It Works: Recycled-Air Scuba System

Conventional scuba systems have some major limitations. Divers using them must carefully monitor the depth and time they stay underwater... 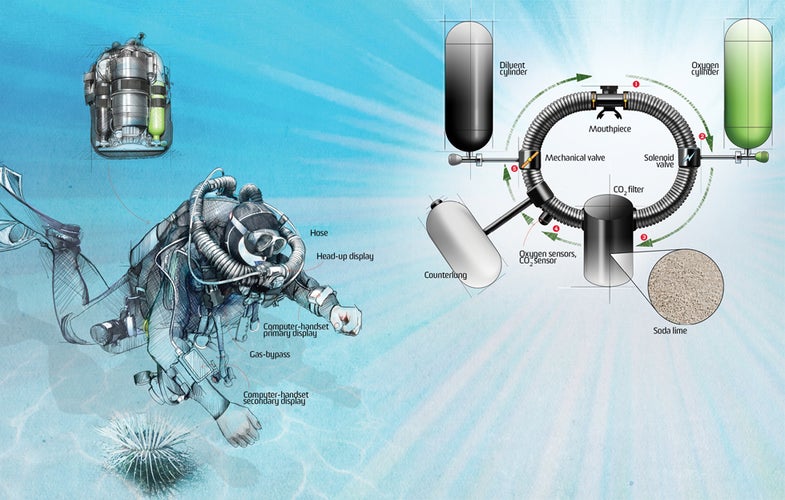 Conventional scuba systems have some major limitations. Divers using them must carefully monitor the depth and time they stay underwater and endure a series of lengthy decompression steps during resurfacing. Rebreathers recycle air, allowing divers to go deeper and remain underwater for longer, with shorter decompression on ascent. The Navy has used the devices for decades, but they were very expensive, and difficult to maintain and operate. In 2008, VR Technology introduced the Sentinel, a $12,000 rebreather with automated safety systems and full manual backup. Scientists from Woods Hole Oceanographic Institution in Massachusetts and the National Museum of China in Beijing are already using it. This July, Hollis Gear will release the VR-designed Explorer, an even less expensive ($5,400) model made for recreational divers.

Human lungs absorb only 5 percent of the oxygen present in air. Rebreathers remove the carbon dioxide from exhaled air and recycle and supplement the leftover oxygen and inert gases, such as nitrogen, back into the diver’s next breath.

A diver’s CO2-rich exhalation flows through a one-way valve, called a mushroom valve because of its shape, on the right side of the mouthpiece and travels down a hose.

Before the exhaled breath enters the main part of the rebreather, an electrical valve called a solenoid regulates the flow of gas from the oxygen cylinder based on oxygen-concentration data from an onboard computer. The oxygen mixes with the CO2-rich exhalations.

Next, the air enters the CO2 filter, a canister the size of a coffee can that holds about five pounds of absorbent granulated soda lime. Lime binds to the CO2 that flows through the filter but has no effect on oxygen or inert gases, allowing them to pass through unhindered.

Two computer handsets strapped to the diver’s forearms and a head-up display placed in his line of sight show his oxygen and carbon dioxide levels in real time. If the rebreather malfunctions, the onboard computer instructs a motor to vibrate the mouthpiece, and red lights embedded in the mask flash near the diver’s right eye. A gas-bypass button hangs from each shoulder. The diver can add oxygen or diluent manually if the automated system malfunctions. If all else fails, divers also carry a bailout scuba tank. 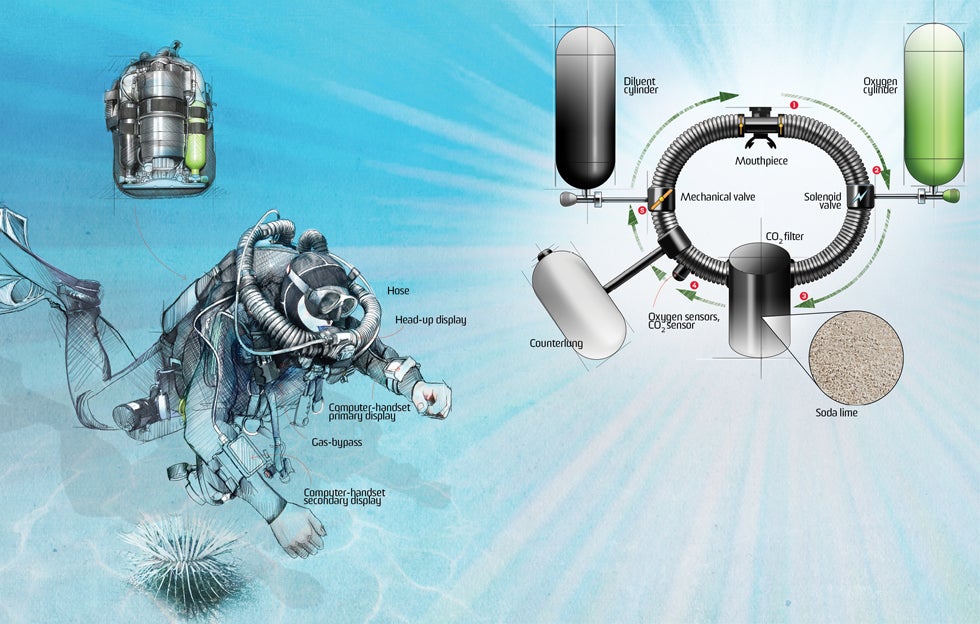