How It Works: Two-In-One Turbocharger

Carmakers are responding to high oil prices and strict fuel-economy standards by replacing large gasoline engines with smaller, more-efficient ones.... 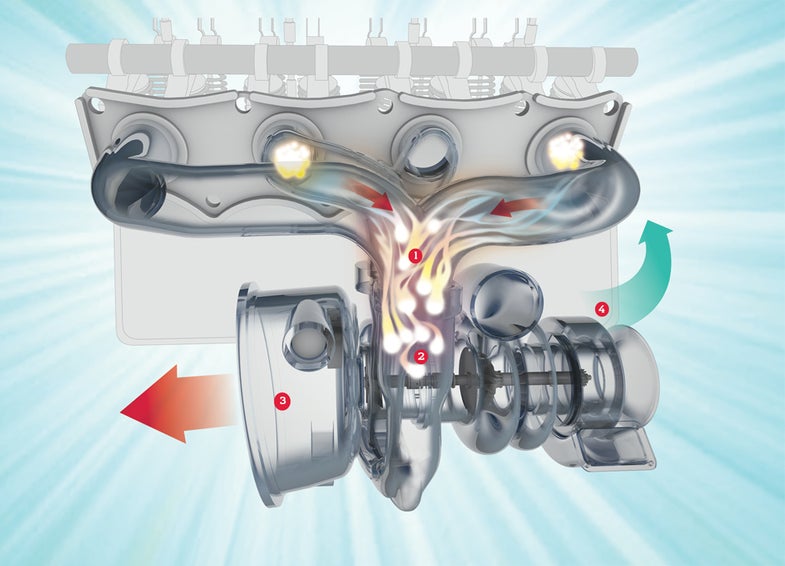 Carmakers are responding to high oil prices and strict fuel-economy standards by replacing large gasoline engines with smaller, more-efficient ones. And frequently, they are using turbochargers to make the switch without sacrificing power. The problems with turbochargers have typically been high cost, mechanical complexity, and a delay in power delivery called “turbo lag.” Using two turbochargers reduces turbo lag but further increases complexity and cost. Twin-scroll turbochargers solve all of these problems. Long found only in pricey sports cars, twin-scroll turbos, which mimic the effect of a pair of turbochargers, are now appearing in less-exotic cars, such as the 2012 BMW 3-series. The new TwinPower four-cylinder produces just as much power as the six-cylinder it replaces while using 15 percent less fuel. Nearly every other carmaker is working on similar downsized, turbocharged engines. [Note: the numbers in the image correspond to the list of captions that follows.]

Instead of escaping through the exhaust pipe, hot gases produced during combustion flow to the turbocharger. The cylinders inside an internal combustion engine fire in sequence (not all at once), so exhaust exits the combustion chamber in irregular pulses. Conventional single-scroll turbochargers route those irregular pulses of exhaust into the turbine in a way that causes them to collide and interfere with one another, reducing the strength of the flow. In contrast, a twin-scroll turbocharger gathers exhaust from pairs of cylinders in alternating sequence.

The exhaust strikes the turbine blades, spinning them at up to 150,000 rpm. The alternating pulses of exhaust help eliminate turbo lag.

Having served their purpose, exhaust gases flow through an outlet to the catalytic converter, where they are scrubbed of
carbon monoxide, nitrous oxides and other pollutants before exiting through the tailpipe.

Meanwhile, the turbine powers an air compressor, which gathers cold, clean air from a vent and compresses it to 30 percent above atmospheric pressure, or nearly 19 pounds per square inch. Dense, oxygen-rich air flows to the combustion chamber. The additional oxygen makes it possible for the engine to burn gasoline more completely, generating more performance from a smaller engine. As a result, the TwinPower engine generates 30 percent more power than a non-turbocharged one of the same size. 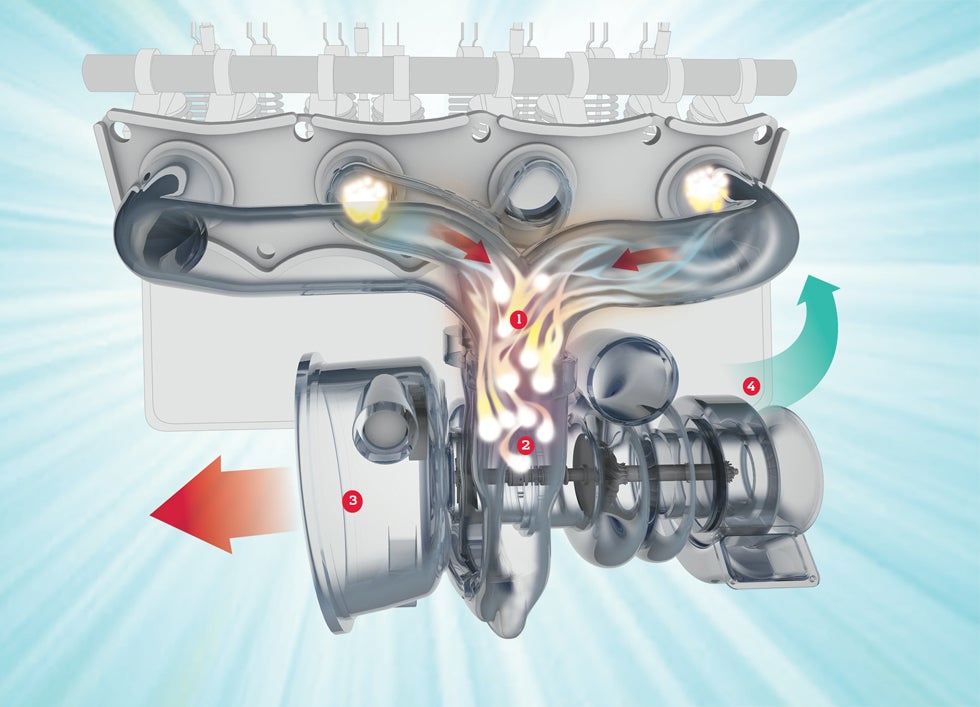 Vehicles
Cars
How It Works 2012
turbochargers