If you grow a brain in a lab, will it have a mind of its own?

As our ability to create organs expands, ethical questions come into play. 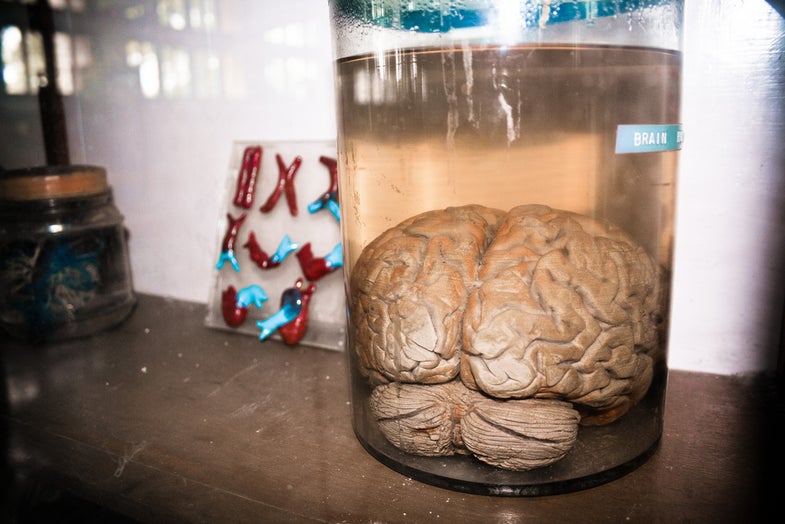 There are lots of reasons one might want to grow brains. For starters, they would allow us to study human neurological issues in detail, which is otherwise quite challenging to do. Neurological diseases like Alzheimer’s and Parkinson’s have devastated millions of people, and brains in a jar (so to speak) could allow us to study disease progression and test potential medications.

The prospect of a lab-grown brain is so compelling that the authors of an editorial in Nature published this week wrote that “the promise of brain surrogates is such that abandoning them seems itself unethical, given the vast amount of human suffering caused by neurological and psychiatric disorders, and given that most therapies for these diseases developed in animal models fail to work in people.”

But there’s a problem. The closer we get to growing a full human brain, the more ethically risky it becomes.

The editorial co-authors note, however, that we have to grapple with these issues now. Given how tantalizing—and genuinely beneficial—the promise of lab-grown brains is, they write that we can almost be certain that we will, at some point, grow a whole brain. We’re far from that point—all we can do now is grow clumps of brain cells—but now is the time to consider the ethics. The authors advocate for careful consideration by lawmakers, bioethicists, researchers, and any other experts who’ll have a say.

And there’s one more group who should be thinking about these issues: you all. Yes, you, the readers of this piece, should start rolling these ideas in your mind. You may not have the power to directly influence policy about brain research (or who knows, maybe you will!), but these policies will be public policies. They will influence the kind of research our government institutions are allowed to carry out. Your tax dollars will fund that research. Think about it now, before it matters.

The editorial itself raises a number of hugely important issues—how would you dispose of a living bit of brain? Who has ownership of the brain bits if the cells come from a donor?—but non-neurologists tend to leap to one big question in particular: when would we consider a brain to be its own person?

We already think about brains and life; just in reverse. Brain death is, in many countries, the definition of death. Lots of people think that you’re no longer a living person once your brain has shut down. This makes a lot of sense if you think that your life and personality are inside your brain. But maybe you think your true personhood is in something like a soul—maybe that changes how you think about brain death.

So let’s take a moment to consider what would happen if we grew a brain in a lab. Right now, scientists can create what are known as brain organoids, which are essentially clumps of brain cells. They can grow neurons or other types of cells, but they can’t yet make a functional amalgam of these cells. Your brain contains billions of neurons that rely on many millions of other kinds of cells, like glia and astrocytes. Scientists haven’t figured out a way to get all those different groups to grow together in something resembling a real brain. Someday, though, they will.

At some point, neuroscientists will probably be able to grow a whole brain, complete with all the right cells. It won’t be hooked up to a body, but it might feasibly be able to have thoughts. We just don’t know yet.

The question is: would we consider that a person? Most likely not. But what if we could transplant it into a body? Or we could use a computer to converse with it? If it existed for long enough, it could have memories—though without sensory organs what would it remember? What if we hooked it up to external sensors so it could feel or taste or hear? We are clearly ill-equipped to answer these questions.

It seems the best people to consider them would be the very researchers who wrote the editorial. So we asked some of them. Here’s what they thought:

Could a lab-grown brain become a person?

Henry Greely, director of the Stanford Program in Neuroscience and Society at Stanford University, notes that to become a full person in the eyes of the law, it would need to be conscious (a definition on that is still TBD—more on that in a bit). But what about the kinds of rights we give to, say, a newborn? “That’s trickier and, to be honest, I’m not sure,” he says. That point may be when a brain could show signs of consciousness at the level of a baby or even a toddler.” A newborn can’t do a whole lot, but we definitely consider it conscious. If a disembodied brain could reach that level, wouldn’t that have to be a person?

Many of the other researchers didn’t think a lab-grown brain would ever become a person. James Bernat, a professor of neurology and medicine at the Geisel School of Medicine at Dartmouth, says “I do not think scientists will ever develop a lab-grown brain organoid that would have enough neurological function to be considered a person.” Though he also noted that “whether brain organoids of the future will ever develop neurological functions is highly questionable.”

Jeantine Lunshof, a research scientist-ethicist at MIT Media Lab, says “I do not think that an isolated lab-grown brain can ever become a ‘person.’” Personhood, she argues, is a challenging concept. “Personhood presupposes capabilities and—to the best of my current knowledge—an isolated brain that has been grown from an organoid will always lack that,” she says.

Similarly, Eswar Iyer, a postdoctoral fellow at Harvard Medical School, says he doesn’t think lab-grown neural tissue would have the right attributes to be considered a person. “Artificial intelligence may be ahead in line for this.”

Will we be able to know when or if a brain is conscious?

There’s no singular, scientific definition of “consciousness.” We know humans have it. We are aware of our own existence and our place in the world, and we have our own inner thoughts and feelings. Other animals? We’re not so sure.

Nita Farahany, director of the Duke Initiative for Science & Society, notes that we already “are able to detect when there is a loss of consciousness in humans.” But she says it will be challenging to understand whether other species have consciousness, or which ones have the capacity to develop it.

There’s a gray area here, though Stanford’s Greely argues we don’t necessarily have to pin down the answers to the whole spectrum of possibilities. “I think we’ll be to agree on some ‘safe harbors’ where it clearly is or isn’t conscious without necessarily being able to answer it all cases. We know that a human body that has been cold, blue, and stiff for two days is not a seat of consciousness; we know that an academic writing email answers to questions (probably) is. How big will be the area between ‘comfortable’ extremes? That remains to be seen.”

But maybe we’ll never need to worry about it. James Bernat doesn’t think so. “In our lifetimes, I do not think we will need to consider the question of when a lab-grown brain organoid is conscious,” he says, “because I don’t think we will understand how the brain generates consciousness for the foreseeable future. Measuring it represents another challenge that might be possible if we can ever fully understand its precise biological mechanism.”

MIT’s Lunshof says that it might not even be possible. “With isolated lab-grown organoids, there never has been anything like ‘consciousness’ and I do not see how it would acquire it, in particular as it is without sensory organs. On the other hand, experiments have shown reactivity (electrical current) to e.g. light. But, that is not consciousness.”

“I do believe we do need more explicit definitions of what consciousness is, together with more developed guidelines on how to recognize and measure indications of consciousness in the laboratory setting,” says Jonathan Ting, an assistant investigator at the Allen Institute for Brain Science. “The answers to these emerging and difficult questions may be slow to come, but our intent is to stimulate thought and open a healthy dialogue about the ethical considerations as we enter new uncharted territory in human brain research.”

Greely agrees. “This paper reflects some of the most interesting, and perplexing, issues I’ve encountered in over a quarter of a century working in this field. It’s exciting to deal with them—and comforting that, at this point anyway, we seem to be years if not decades away from having to face them in their most serious forms.”

Which is not to say we should put off having the discussion. However far away this hypothetical future may be, Greely says it’s important to begin now. “We have time to think about them. We need to start doing so. And that’s what the neuroscience and ethics authors of this piece all agree about.”