Do probiotics actually do anything?

The tiny bugs are marketed as a quick fix, but the body of evidence is miniscule. 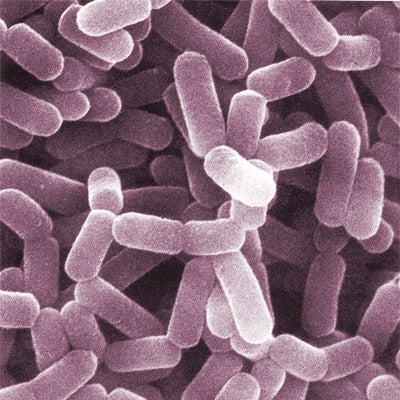 The supplement aisles of most grocery stores and pharmacies in the United States are bursting with probiotics. These billions of bacteria stuffed into once-a-day capsules claim to provide digestive relief, among other benefits. They’re extremely popular, with sales of $36.6 billion in 2015. And for good reason. For many people, various gastrointestinal issues come and go pretty much forever, causing chronic discomfort or worse. But according to gastroenterologists and other scientists, these tiny bugs might not be doing the jobs they claim to do.

“The truth is, there’s just not a lot of completed studies out right now that prove that certain probiotics can help people with specific conditions,” says Matthew Ciorba, a gastroenterologist and director of the Inflammatory Bowel Disease program at Washington University in Saint Louis.

Despite the supermarket shelves exploding with probiotic brands claiming to be good for your gut, most of the probiotics on the market today have not been through any sort of clinical trials to prove they do anything at all. And an even smaller number of them—virtually none—have gone through the Food and Drug Administration (FDA) before reaching consumers. Typically, all medications, either prescribed or over-the-counter, that claim to treat a specific condition must go through the FDA to ensure they are both safe and effective—meaning they’ve been proven to do what they say they do—for consumer use. But supplements that don’t treat specific conditions aren’t forced to go through this vigorous screening process. And somehow, probiotics have managed to nestle themselves into this rather nebulous category.

Probiotics are essentially strains of bacteria that are thought to benefit your gastrointestinal tract. Our bodies are teeming with bugs that help to digest food, protect us from toxins, and keep the lining of our intestines healthy. In the past two decades, scientists have come to understand how important these tiny organisms are to our health and survival.

And as they’ve started to figure that out, supplemental probiotics have started appearing in stores, claiming to help ease digestive discomfort. Most of these early probiotics were strains of lactobacillus and bifidobacteria, which are the same bacteria used to ferment foods and are found naturally in yogurt and kimchi. But none of them actually went through rigorous clinical trials or the FDA to prove their effectiveness—and the bacterial players haven’t really changed much over the years, says Ciorba. And so while they’ve been touted as a “cure all” for digestive distress, no one knows for sure what they do or what conditions they might treat.

Ciorba says that when probiotics first became popular, the FDA was not completely sure how to handle them. “Not only was it a natural product, but it was also a live product. And it was being used in all these different populations to presumably treat diseases,” he says. Now that the FDA is more actively involved, there’s better research being done on these supposedly miraculous microbes. But just as there is no such thing as a standard, universal antibiotic that cures all bacterial infections, there is no universal probiotic—no cure-all beneficial bug to fix your gut. It’s going to take a lot of time, effort, and research to figure out what bacterial strains help what conditions, says Ciorba. We may one day be able to design and purchase probiotic strains tailored to fix our problems, but we’re not there yet.

A combination of misleading marketing and media hype keep us clambering for probiotics in spite of their ineffectiveness. “I have patients with Crohn’s disease and ulcerative colitis who we have medicines that we know exactly what they do, and exactly how they work, and what the chances of them working are,” Ciorba says. “And patients will say, ‘well I don’t want to take that, I’d rather take a probiotic.’ Well we know that a probiotic does not help you in clinical trials that have been done. And they say, ‘well, I’d rather give it a try.’” Plus, probiotics have the added benefit of being sold over the counter. Buying a bottle of probiotics online is an easier pill to swallow than telling your doctor how unhappy you are with you bowel movements.

But Ciorba admits that patients aren’t the only ones to blame. “In the past, doctors haven’t been very good at figuring out what gastrointestinal symptoms are related to.” Doctors still haven’t completely pinned down what causes irritable bowel syndrome, for example, a condition that affects about 11 percent of the population worldwide. So it’s not shocking that patients would seek out some kind of natural remedy.

Where exactly do probiotics stand?

Ciorba says there is still a place for probiotics today, but it’s important for consumers to first figure out exactly what is at the root of their stomach ailments. He says many gastroenterologists do recommend probiotics, but it depends on the condition their patient has. And almost all of the probiotics they recommend have been through clinical trials to prove they are effective. For example, each capsule of the probiotic Align contains one strain of bifidobacteria that was specifically tested and proven somewhat effective in treating one particular subgroup: Women with irritable bowel syndrome (with a predominance for diarrhea, as opposed to the type that causes constipation). Ciorba says that in his own practice, he has indeed found Align to be helpful for some patients.

For people who have diarrhea resulting from recent antibiotic use, several strains of Lactobacillus and the probiotic yeast Saccharomyces boulardii can limit the duration or intensity of the symptoms. Ciorba frequently recommends the probiotic Culturelle, which contains a strain of Lactobacillus, for that as well as for bacterial and viral infections that cause gastrointestinal symptoms, as it may shorten their duration. But for other GI diseases—inflammatory bowel diseases like Crohn’s disease and Ulcerative Colitis, for example—it’s more complicated. Studies have not found probiotics to be effective against Crohn’s disease, and they appear to be only help some Colitis patients with mild cases of the disease.

The bottom line, Ciorba says, is that “there is tremendous excitement and enthusiasm about how we are going to use the microbiome in order to change health. But that is a process that is still going to take time.”

In the meantime, Ciorba advises against buying and using probiotics “just because they are good for your gut.” While they are generally safe and benign for most people, because they are living products, there is always a chance they could make you sick—which is one of the major reasons the FDA is now regulating them more strictly. In the future, Ciorba says, all probiotics that claim to treat certain conditions will almost certainly need to get clearance through the FDA.

What will the probiotics of the future look like?

Ciorba says researchers are trying to pinpoint exactly how these bugs benefit us humans. All bacteria, including the ones in probiotics, create metabolites, which are small molecules that perform specific purposes inside your gut. Some metabolites help break down certain food products and keep our intestines healthy, for example. If researchers can figure out how to isolate those metabolites, they might be able to create medications that include just the most helpful molecules. But that research is just getting started, and Ciorba suspects scientists might eventually realize that the bacteria themselves are necessary. “The bugs are a good delivery mechanism. They get whatever it is the metabolites do to the right location,” says Ciorba. “Right against the wall of the colon, or within the mucus, or somewhere that taking a metabolite may not be good enough.”

For now, Ciorba says, it’s not necessary—or even prudent—to take probiotics if your digestive health is pretty good. But if you are keen on trying them, do it in a rational way, he says. If a month of daily probiotic supplements don’t make you feel noticeably better, it’s probably not worth spending your hard earned cash on these misunderstood bugs.