New photos available at the Chinese website lt.cdbjy.net show another wrinkle to China’s buildup of new antisubmarine warfare capabilities. The... 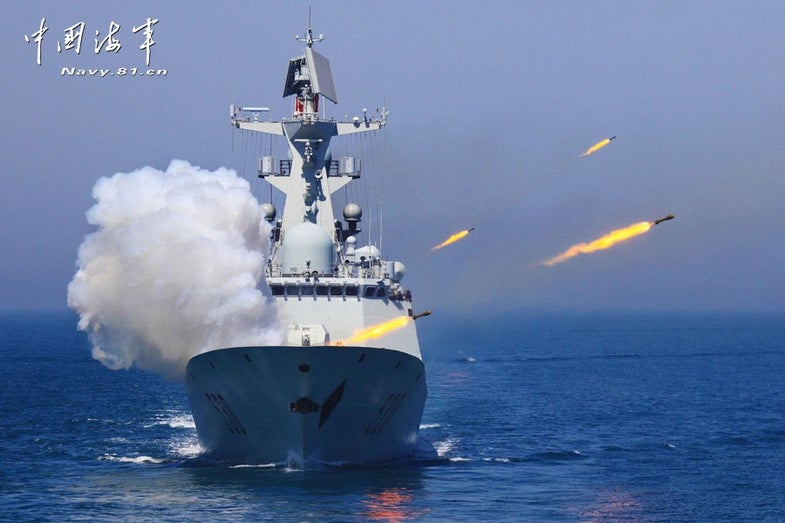 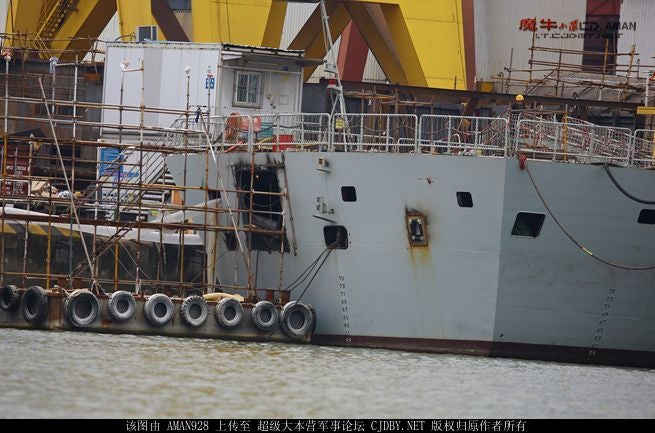 The large portal in the 054A Frigate’s rear holds the Variable Depth Sonar, as well as the powered winch used to lower it deep into the Pacific Ocean. With the right seawater density, salinity and temperature, a VDS detect enemy submarines up to hundreds of miles away.

Earlier examples of the Type 054A had no VDS and its associated support machinery (which requires a large opening to fit the winch) installed in the frigate’s stern.

New photos available at the Chinese website lt.cdbjy.net show another wrinkle to China’s buildup of new antisubmarine warfare capabilities. The Type 054A is a 4,000 ton multi-role frigate armed with 40 anti-ship and air defense missiles; it is also the most ubiquitous warship class in the People’s Liberation Army Navy (PLAN). The modified stern of this Type 054A Frigate has been upgraded to support dedicated anti-submarine warfare (ASW) sonars. Two more openings were cut into the left side of the stern, presumably for a towed array (passive) sonar (TAS) and a variable depth sonar (VDS). TAS is a set of listening devices called hydrophones, placed on a cable that is up to several kilometers long. By deploying at a distance from the ship, TAS has less blind spots than hull mounted sonar and reduced interference from the ship’s own noises. The VDS is lowered from a machine powered winch in the door sized vertical opening of the stern: it can be dropped to different ocean depths in order to more efficiently locate submarines in deep waters (warmer water near the ocean surface reduces the range of active sonar).

Like the 056 ASW Corvette, the latest 054A Frigate has been equipped with a active Variable Depth Sonar (in the large vertical opening at the rear) for deep water submarine hunting missions.

Similar TAS and VDS emplacements are also found on the Type 056 corvette. Combined with recent Chinese efforts at unmanned underwater vehicles and new ASW helicopters, the PLAN is clearly making a sustained effort to address its historic deficiency in ASW operations. This is not only relevant to competition with the US fleet, but also for regional security relations, as other Asian navies have been procuring advanced conventional and nuclear submarines in an effort to balance China’s growing blue water capabilities.

Not a Shark but a Robot: Chinese University Tests Long-Range Unmanned Mini Sub