It's much, much bigger 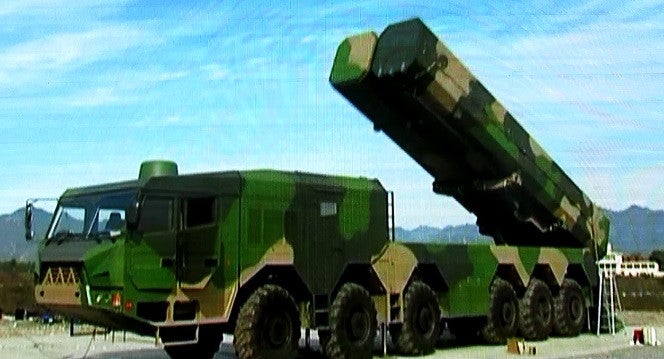 The new 12X12 TEL has the same width as the CJ-10's TEL vehicle, but only two launchers instead of three, suggesting missiles with a 50% greater width over the CJ-10 LACM. Also note the satellite comm dome on top of the cab, and larger cabin area above the first and second axles, presumably for additional crew and control equipment. =GT at China Defense Forum
SHARE 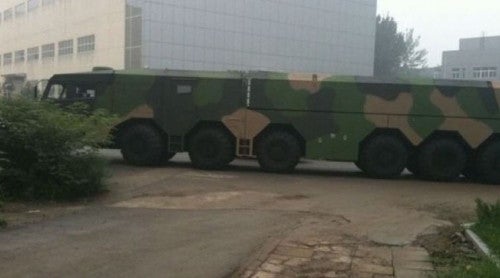 This new 12X12 all terrain truck is the biggest TEL vehicle yet seen to date for Chinese cruise missiles. While the exact type and nature of its missile is unknown, it likely would represent another great leap forward in its force projection and access denial operations in the Western Pacific.

In mid-August 2015, eagle-eyed Chinese drivers spotted a new Chinese military vehicle that may give an indication of new missile launcher capabilities on the way. 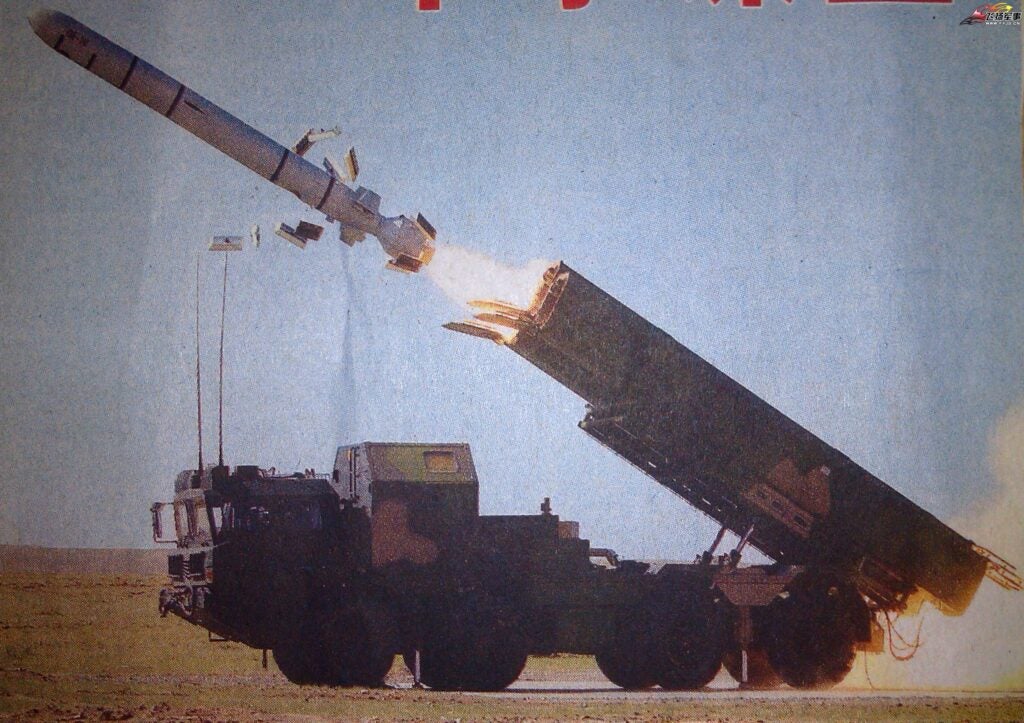 This clear image of a TEL vehicle launching a DH-10 provides us with a detailed look at the cruise missile; while the tailfins have deployed, the air intake and wings have not. The debris is from the breaking open of the canister, while the short cylinder attached to the missile’s rear is its integrated rocket booster that brings the missile into flight before the turbofan engine starts.

Transporter Erector Launch (TEL) vehicles provide a mobile, survivable platform for surface-to-air, cruise and ballistic missiles, allowing them to disperse across the countryside in preparation for quick launches. This new TEL vehicle is similar to the all-terrain 8X8 TEL for the CJ-10 land attack cruise missile (LACM), but it’s much, much bigger. It appears to share a similar powertrain to the CJ-10 TEL and has the same width, but it’s much longer; it has 6 axles with 12 all-terrain wheels. There’s an extended section above the first and second axles, which would likely hold additional personnel and equipment for missile launch and flight corrections. Also, it has a satellite communications dome, suggesting that it requires higher bandwidth for datalinks necessary to operate a more sophisticated missile.

The new 12X12 TEL has the same width as the CJ-10’s TEL vehicle, but only two launchers instead of three, suggesting missiles with a 50% greater width over the CJ-10 LACM. Also note the satellite comm dome on top of the cab, and larger cabin area above the first and second axles, presumably for additional crew and control equipment. 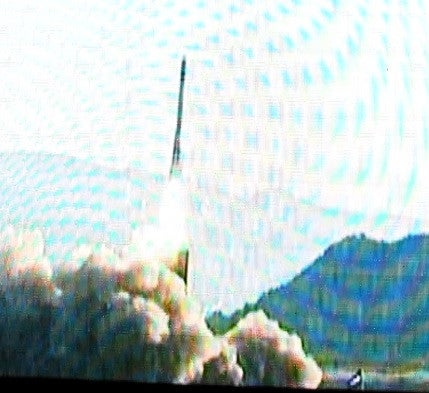 They Have a Bigger Missile

The cruise missile launched by the new 12X12 TEL vehicle is much larger than the CJ-10 LACM. Its greater length could suggest it to be the 540km range YJ-18 antiship missile, though its greater width and pointed nose cone could make it another supersonic anti-ship missile, or high performance air defense missile.

Speculation is that the new TEL truck is for the 540km-range YJ-18 anti-ship missile, a Chinese adaption of Russian Klub rocket/cruise missile technology. The Klub missile uses a discardable turbofan engine to cruise at subsonic speeds for most of its flight, and then uses a rocket engine to reach supersonic speeds of Mach 3 in its final 50 kilometers of flight. Given that the longest Klub missiles are about 9 meters in length (including booster), the new TEL could be for the YJ-18 anti-ship missile. However, greater diameter of the new missile could point to other possibilities, such as the long-range surface-to-air and anti-ballistic HQ-26 missile, an ultra long-range (4,000km+) cruise missile, or another large supersonic cruise missile. What can be certain is that the new missile launch vehicle, its increased sophistication, along with a likely larger missile it will carry, shows China’s continued goal to develop and deploy new weapons as part of an updated and integrated architecture for extending its reach in the Asia-Pacific region.

Want to Know What It Feels Like to be Blown up by a Chinese Missile? Ask this Ship.