China’s Future Submarine Could Go The Speed Of Sound

Thanks to a gas bubble and a liquid lubricant 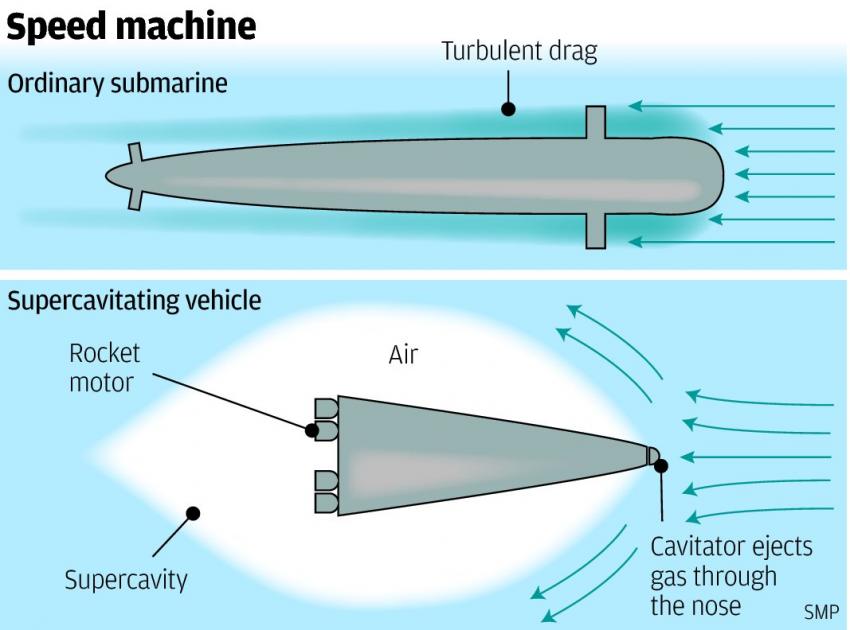 The submarine of the future may come to America in a super fast bubble, traveling under water. Researchers at China’s Harbin Institute of Technology developed a new concept for submarine “supercavitation,” where an underwater vessel creates a pocket of air around itself. Inside this bubble, the submarine can travel much faster without friction of water creating drag and slowing it down. Theoretically, a supercavitated vessel using rocket engines could travel inside that air pocket at almost the speed of sound.

While the exact science of forming an air cavity within a liquid for submarines is complex, the phenomenon is easy to observe in a simple college prank. Clanking one full beer bottle on top of another compresses the beer in the bottom bottle, causing it to release air bubbles rapidly and overflow. For submarines, the bubbles come from a gas ejected out of a special nozzle at the nose, but the vessel has to be going a fast speed–thus compressing the air in front of it–in order for supercavitation to take effect. Once it’s going super fast inside a pocket of air, steering becomes hard as the vessel behaves almost like a missile.

The Harbin researchers’ concept may help the submarine get up to the speed where supercavitation can start to happen. First, the vessel releases a special liquid membrane over itself, reducing drag before the supercavitation takes effect. Then, to steer the craft, the drivers alter how much and where the liquid membrane gets replenished, creating areas of lesser and greater friction that turn the vessel. (The finer details of the design and how it works are being kept secret by the military.)

Membrane steering is a breakthrough for supercavitation, but the scientists at Harbin’s Complex Flow and Heat Transfer Lab acknowledge that it alone isn’t enough to make super fast submarines possible. Such a craft still needs a rocket engine that works underwater, and one that can last long enough to complete the cross-Pacific journey.

Supercavitation itself isn’t new. Military researchers from multiple countries started working on the idea decades ago. In the 1960s Russia started work on the Shkval supercavitating “underwater rocket,” which had a maximum range of about four miles. The United States started working on a supercavitating torpedo in 1997, and DARPA announced a program to develop a supercavitating mini-submarine in 2006. Range and steering posed problems for all of these projects, but the Harbin Institute’s liquid membrane might be the breakthrough needed that lets submarines fly underwater like rockets. With luck, the supersonic submarine will fare better than attempts at hypersonic missiles.