Vote For Zoltan If You Want To Live Forever

The founder of the Transhumanist party plans to upgrade humanity, and he’s running for president in 2016 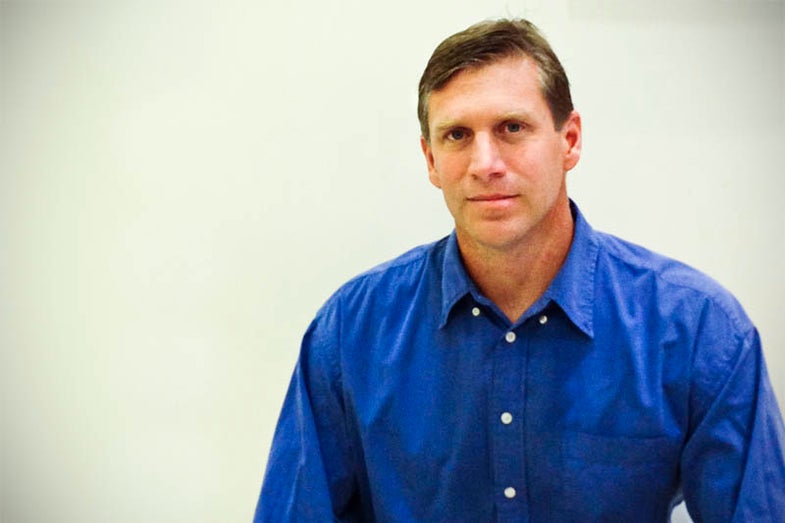 Zoltan Istvan didn’t see the half-buried bomb. He was reporting on a story about Vietnam’s forgotten landmines when he wandered off the path to look at the scar of an explosion on the jungle floor. The next thing he knew, he was on the ground–his guide had tackled him just before he could step on a small landmine. The bomb didn’t go off, but Istvan was shaken. While he cleaned off his camera lens, he decided to take a break from journalism for a while. He returned home to write a novel, The Transhumanist Wager, about a man’s quest to live forever using science, medicine, and technology.

Then he decided to run for president.

Beyond being a politician, Istvan is an entrepreneur, a blogger, and the founder of the Transhumanist Party–a group of some 25,000 people who want to enhance the human body and extend the human lifespan using science and technology. Man and machine are already merging through advances such as pacemakers, retinal implants that help the blind to see, and exoskeletons that let people who are disabled to walk again. Istvan and his supporters are radically optimistic that technology and science will solve the world’s problems, eventually leading to immortality and the ability to upload our consciousness to computers.

But many of these potential advances could have a dark side–for example, remotely operated birth control that’s convenient for women, but also lets the government decide who gets to have children. We talked to Istvan about the future techno-evolution of the human species, and how we can avoid setting ourselves up for a sci-fi dystopian nightmare.

The following transcript has been edited and condensed.

Popular Science: Why are you running on the Transhumanist platform?

Zoltan Istvan: Because nobody is addressing the big questions. Hillary Clinton, what is your position on designer babies? Jeb Bush, are you planning on stopping stem cell technologies, like your brother George W. Bush? The Transhumanist party is willing to discuss this all day long. We’re willing to tackle exoskeleton technology and eliminating disability. We’re willing to talk about how whether we should promote artificial intelligence or whether we’re actually talking about ending our species through some sort of Terminator scenario. I don’t think the other politicians are even coming close to addressing any of those issues.

What would you do if you became president?

We would take large amounts of the defense money and put it into the scientific and medical fields, and especially the life-extension fields. I think the biggest thing I’m running on is, if you voted me in, I would do my best to guarantee you an indefinite lifespan. I know that sounds a little crazy–“Vote for me and I’ll give you eternal life!”–but it’s true. We believe that with one trillion dollars, within 10 years we would come up with all sorts of anti-aging drugs, age-reversing procedures, and organ printing–because it’s organ failure that usually causes death. It’s not that we’re going to eliminate death, but we can make it so that the average person would have a much better chance of living far longer.

“If you voted me in, I would do my best to guarantee you an indefinite lifespan.”

The Transhumanist party is also trying to implement guidelines and policies for existential risks. We have real ideas on how to deal with artificial intelligence. We have real ideas on how to protect the species from asteroids. It’s time to get Ebola off the planet. It would be well worth our time to tackle these issues and put money towards them, so that we don’t have to worry about things like bird flu. We can knock them out if we have enough resources put into it.

That’s a lot of different technologies. Which ones would you prioritize?

If we were given a billion dollars, we would put it into robotic hearts. We think the most important thing to do for the American public is to wipe out heart disease. It’s a crime in a way that we have had this technology for 15 or 20 years, and nobody has taken it seriously. If you wipe out heart disease, you’re going to save approximately one-third of Americans.

I also advocate for a lot of chipping. You could have a cranial implant and anytime you have some type of extreme trauma–for example you’re drowning or you’re being burned to death in a car accident–you would have a chip that alerts authorities and says, “Hey, something is wrong with this person.” Then you can pinpoint exactly where that person was, and two minutes later you’d have the 911 crew there. If we all get to a place where we’re sort of tracked and able to be determined if something terrible is going on, that would change the entire picture of health.

“If we were given a billion dollars, we would put it into robotic hearts.”

How can the planet support an immortal population?

There’s a very strong chance that within 10 years, most of us will be using IVF techniques and designing our babies. We’ll still probably be using the uterus for another 10 years, but giving birth is something that’s medically dangerous. Eventually there will be artificial wombs. There won’t be such a natural family as we see it now. In 25 or 30 years, making a family will be very much something where you sit in front of a computer, and you decide how you want to do this, and then probably they’ll have something–an aquarium or something in your living room or at the hospital, similar to the Matrix. Again that might be 35 years out, and it’s all dependent upon whether this kind of technology is ethically passed. But I do believe the future of having children will change dramatically, and that will also impact the population levels. You’ll find that people won’t necessarily want to have children if they can spend 100 years in great health.

“We should use technology to empower people to make democratic decisions. If America doesn’t want to have designer babies, it should not allow it.”

That scenario sounds disturbingly like something out of Brave New World. How can we prevent ourselves from creating a similar kind of sci-fi dystopia?

One of the things we need to do is change our voting system. Wouldn’t it be great if we could just vote from our iPhones? Where every time you have a policy that’s being passed, every citizen in America can vote quickly and efficiently on their phone, as opposed to a process that requires registering, requires going somewhere, requires all this other stuff that makes it so that our apathetic population just doesn’t do it. So I think one of the things is to use technology to empower people to make democratic decisions. If America doesn’t want to have designer babies, it should not allow it.

At the same time, if we have the ability to design our children, we need to make sure that every part of society from the wealthiest to the poorest has access to that technology. That will be the way to avoid a Brave New World scenario. Whatever that solution may be–grants or loans, maybe–we cannot just have the rich modifying their children and having even more of an advantage than they already have.

If these technologies come to fruition, we would sort of be guiding our own evolution. How can we do that responsibly?

I think it’s pretty safe to say that everyone is trying to achieve a greater state of well-being, a greater state of health, and just a greater state of prosperity. So as long as we are achieving that–longer lifespans, happier lives, staying together more with our families–if we’re moving towards those things, then that’s a good policy. Whether people can become robots or not is something that society can decide along the way. More likely we’ll just have some robotic parts in us, and those robotic parts will allow us to live longer.

What do you foresee as the long-term techno-evolution of the species?

Eventually we’re going to be so merged with machines, and at the same time we’ll probably be launching a full artificial intelligence, that we’ll have the ability to become one with machines. I’m a big believer in mind uploading.

I believe that in the next 10 to 20 years, we’re going to start experimenting with a lot more cranial implant technology that is tied to all sorts of intelligences. Imagine what this could do for crime if you had a chip in your head that said, “Hey, you can’t do something like that to another human being.”

Those intelligences will eventually become one with ourselves. In 25 to 35 years, we’re going to probably be able to download our consciousness into a machine. That’s one way for transhumanists to find immortality. The thing we want to preserve is our mind, our memories, our sense of identity. And eventually we’re going to put that into some type of machine that is just much more efficient, much stronger, and can go explore the universe. It’s pretty science fiction-y still, but that’s where I think the long-term future is at.

“Imagine what this could do for crime if you had a chip in your head that said, ‘Hey, you can’t do something like that to another human being.'”

You’ve stated before that you don’t expect to win in 2016. Why run?

I have my sights set on 2020 and 2024. The real goal of this 2016 campaign is to grow the movement, grow the Transhumanist party, and set ourselves up for a campaign in 2020 that would have a greater shot to win. By 2020, more transhumanist technology will be impacting the daily lives of people. By 2020 or 2024 there will be people with cranial implants electively. There will be people that are starting to think about replacing an arm for a robotic arm. The age of transhumanism will be much more upon us, needing a political party to address these issues. After all, transhumanism can be pretty scary. When you start talking about implants, you have surveillance issues. When you start talking about robotic hearts, you have hacking issues.

For now we’re just trying to do our best to ask the American public: what does it want out of its future?