Split cycle engines—engines that split the functions of a normal four-cycle piston into two separate but adjacent and complementary pistons—have... 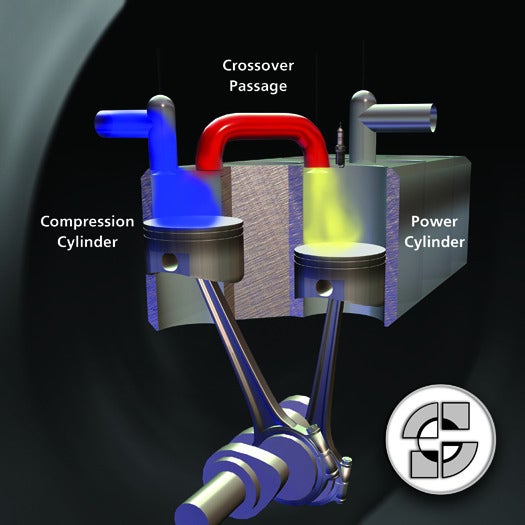 Split cycle engines—engines that split the functions of a normal four-cycle piston into two separate but adjacent and complementary pistons—have never been able to match the efficiency and overall function of traditional internal combustion engines, but a new design could change all that. By tweaking the standard split-cycle design with new features like a compressed air tank that captures wasted energy from the system, the Scuderi Group claim not only to have matched the efficiency of the standard four-cycle engine, but to have far surpassed it.

The Scuderi Group’s design has drawn interest from nine major carmakers, the company says, but has yet to prove the technology in real world prototype tests. But in computer simulations that install a Scuderi engine in a 2004 Chevy Cavalier, the split-cycle engine shows to reduce fuel consumption by 25 to 36 percent, translating roughly to a 50 percent improvement in overall fuel economy.

The engine does so by tweaking old split-cycle designs to be more efficient and to trap wasted energy so that it can be fed back into the system. Traditional four-cycle engines have four piston strokes: a down-stroke that pulls air into the cylinder, a compression up-stroke that compresses air (and fuel) in the cylinder, a combustions stroke in which the fuel and air is ignited and turned to kinetic energy, and another up-stroke in which the exhaust is cleared from the cylinder.

A split-cycle engine distributes those functions between two cylinders one cylinder handles the intake and compression strokes, then that compressed air is fed through a connecting tube into the second cylinder where it is combusted and expelled (this is demonstrated in the video below). Scuderi further improved on this design by adding an auxiliary compressed-air storage tank and by changing the the point at which combustion happens in the second cylinder (conventional engines ignite the gas just before the piston hits its peak on the up-stroke, but he Scuderi ignites just as the piston begins its down-stroke).

How does all this translate into better efficiency? First, the change in combustion timing gives the piston better leverage on the crankshaft, improving efficiency when the engine is working at low speeds. Further, a separate compressed air tank siphons off the air intake that isn’t used for combustion. When the tank is full, the air inside is used to drive the engine, allowing the compression piston to stop compressing air for a period until the storage tank is spent, saving even more fuel.

It’s an interesting and clever design, but while Scuderi does have a prototype engine completed these fuel economy improvements currently exist in computer models only, and there are no guarantees that they will translate into real savings on the road. Moreover, it’s not clear that the Scuderi engine’s savings will be able to compete with improvements in the gas-electric hybrid and EV engines automakers are already making. With automakers trying to move—albiet, slowly—toward whole new kinds of power plants, a redesigned conventional internal combustion engine may have missed its opportunity to be a true game-changer.