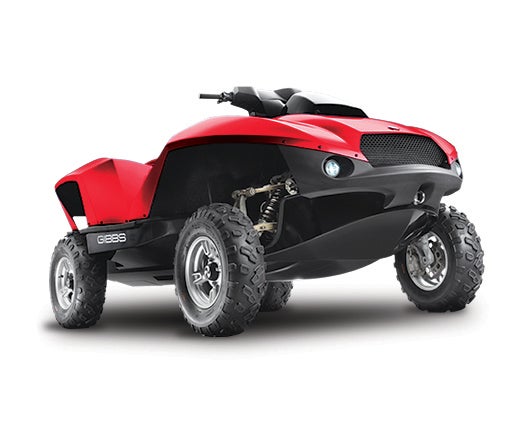 Personal amphibious vehicles have always felt like half-baked mashups—boats with wheels or cars with fins. But a craft can eclipse those attempts if it does two things: move as fast over water as it does on land and transition quickly from land to sea. Last year, Gibbs Sports Amphibians, a private Michigan company, announced that it had built a suspension that retracts in just five seconds and a transmission that consistently propels a craft to 45 mph. Gibbs delivered its first vehicles, large “amphitrucks” for tasks such as water rescue, last year. A smaller recreational version called the Quadski is on sale now. 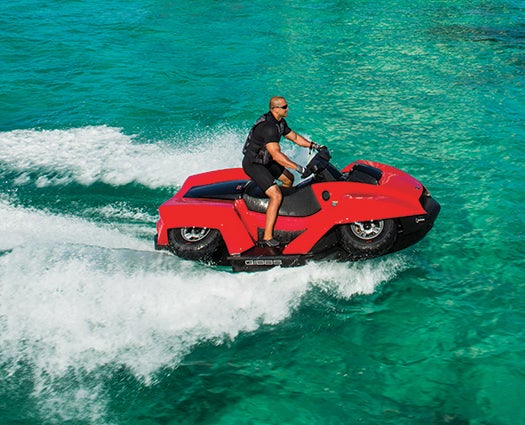 Gibbs engineers outfitted the Quadski with a modified automotive dual-wishbone suspension. To ensure that the fiberglass V-shaped hull has enough ground clearance, they repositioned the upright shaft, which attaches to the wheel, below the wishbone arms instead of between them.

The Quadski’s wheels will not retract unless it is in at least three feet of water. To make sure the water level is high enough, an optical sensor in the rear monitors the refraction of light through water; until the central computer receives the correct signal from that sensor, the wheels remain locked in road mode.

The driver pushes a button to initiate retraction. A control module disconnects the differential to prevent the wheels from turning. Servomotors, similar to those on aircraft landing gear, retract the wheels. Sensors on each motor detect the angle of the wheels; when they’re 15 degrees above the horizontal, the motors shut off.

A thumb-operated throttle controls the four-cylinder, 140-horsepower engine. Torque passes through a pulley-and-belt-driven output shaft to the Quadski’s wheels or a larger-than-normal seven-inch water jet. In marine mode, the five-speed transmission remains in third gear. On land, the rider uses a shifter to toggle between gears.

In the past, amphibious vehicles used displacement hulls, which push water aside rather than lift a craft above it. Instead, the Quadski has a V-shaped hull, which forces the craft up and out of the water when it accelerates, allowing it to plane in about 3.5 seconds.