Rebuilding the Space Coast, one three-wheeled racer at a time 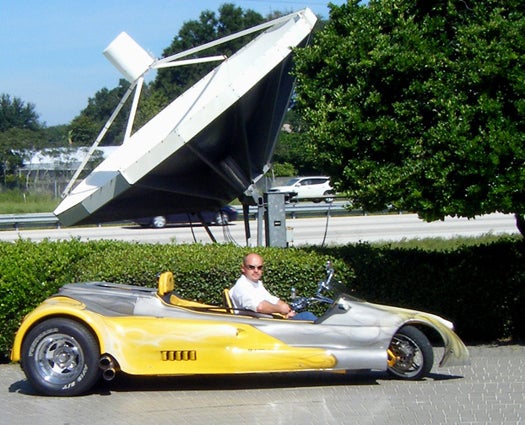 In the shadow of Launchpad 39A–where the Space Shuttle Atlantis once stood ready for orbit–a team of former NASA engineers laid off when the shuttle program ended are building a rocket-inspired street legal tricycle. And it’s not just for kicks. Treycycle Gold–as the company building the bikes is now known–aims to employ more than 100 people within the year, breathing new life into the Space Coast’s engineering economy.

The company started with roughly 15 NASA engineers facing imminent termination and a little help from the Emerging Growth Institute, a non-profit that works with emerging technology companies. They decided to flip their vast experience in vehicle design into a new breed of tricycle that is part car, part bike, and all muscle, accelerating from 0-60 in just 3.6 seconds.

The Treycycle packs a Chrysler 300 3.5-liter engine that supplies the vehicle with its 260 horsepower all packed inside a molybdenum alloy frame offering more strength than the average motorcycle. Unlike three-wheeled motorcycles with their high centers of gravity, the low-to-the-ground Treycycle’s long wheel base makes it extremely difficult to roll over while cornering.

All that may seem like novelty, but people are lining up to buy the vehicles–specifically, 150 people who are already on the wait list. The company is even developing a three-seater “family” trike. For now the company will roll out two Treycycles every three weeks, but as demand dictates they will grow the company further–perhaps to as many as 130 people within a year. That’s good news for a region packed with engineering talent but without enough industry to employ all the smart people falling out of NASA programs.

For career Space Coasters, finding new ways to apply their know-how is a matter of pride. Hence the specialized serial number plates, which also read: “Made on the Space Coast in the Sunshine State.”