A camera finds individual drops, then a projector blacks them out of the driver's view. 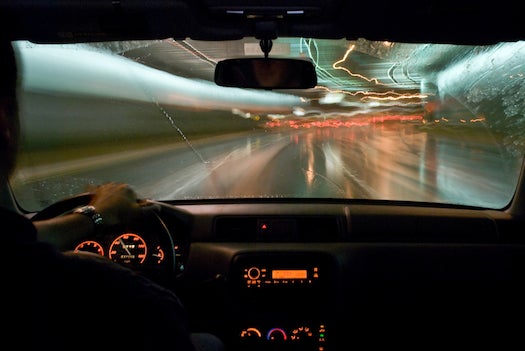 Anyone who’s ever driven through a heavy rain has hoped for something like this: a system that can make rain drops vanish–or at least look like they do.

Intel and Carnegie Mellon University have developed technology that makes it happen, CNET reports. Each headlight projects not just a single beam, but a grid of several tiny beams (that’s how the different-colored pixels are projected on the screen when there’s actually an image being shown).

A camera behind the projector watches for raindrops, and a processor predicts their paths. Then the projector blocks out just the part of the grid where the rain is falling, darkening just the pixels in its way. Presto: a rainless view.

Intel says it’ll be available in a decade, and even though it’s not quite perfect–some drops still look like they sneak through, at least at the top of the driver’s range of vision–it seems like a major safety improvement from windshield wipers and a prayer.