Humans Can Feel Empathy Toward Robots

Brain scans show we feel bad for robots when they're mistreated. 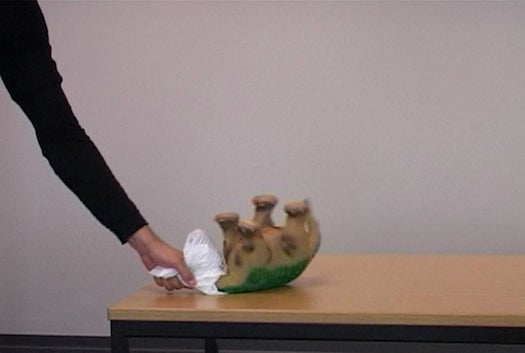 Humans feel bad when they see other humans being mistreated, but do we feel the same way about robots?

A team of researchers tested that by being first sweet and then really, really cruel to a poor little innocent dinosaur robot. The subjects in the study were shown two videos: in one, scientists acted affectionately toward the robot dinosaur, but in the second, they downright tortured it. Through skin conductance, a measure of strong emotions, the researchers found that people were distressed when they watched the robot being hurt.

In a second study, researchers used fMRI scans to test again for the empathic feelings. In that study, subjects were shown a human, robot, and inanimate object. The videos showed researchers being affectionate or cruel to the three categories, and the subjects’ limbic systems were scanned as a measure of emotional reaction. Again, the subjects felt bad for the robot, but not as bad as they did for the human. (One staged video showed a woman being attacked and suffocated with a plastic bag, so, yeah, hopefully that made them feel worse.)

What does this say about how we experience empathy? Well, other studies have looked at human empathy for robots, but this study puts it in the context of empathy for humans and inanimate objects. There’s definitely something about being “alive-like” that makes us empathize, even if we consciously recognize that a robot doesn’t have emotions. Consult your tear-stained DVD of Wall-E for more examples.