This Tiny Car Drives Itself

Hop in and let the Ropits chauffeur you. (But just you.) 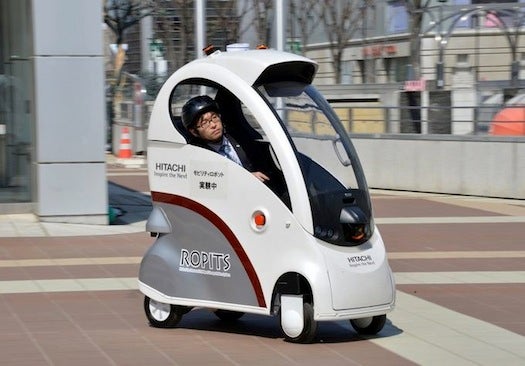 We’ve seen some cool ideas for self-driving cars, but it’s complicated designing one that can work alongside other, human-driven vehicles. One way to get around that? Make a teeny, tiny car that’s small enough to take to the sidewalks, squeezing through urban walkways instead of the road.

Unveiled Tuesday in Tsukuba, Japan, the Hitachi Robot for Personal Intelligent Transport System, or goofishly acronymed “Ropits,” is a one-person vehicle designed to shepherd people with difficulty moving. It uses GPS and laser sensors to stay on course, and a gyro sensor to keep upright on un-even ground. That tech is especially important for a vehicle like this, since sidewalks and other pedestrian areas aren’t as uniform as roads.

Sounds simple enough to operate, too. After hopping in, a passenger gives direction through a tablet PC that stores maps. Tap a point on the map, and Ropits zips off to destination.

But if you’re not totally comfortable with the idea of having the car drive you instead of the other way around, Ropits also has a joystick that can be used to steer in emergencies.