Most independent inventors don’t have bottomless bank accounts. To fund their dreams, many innovators are appealing to strangers on the... 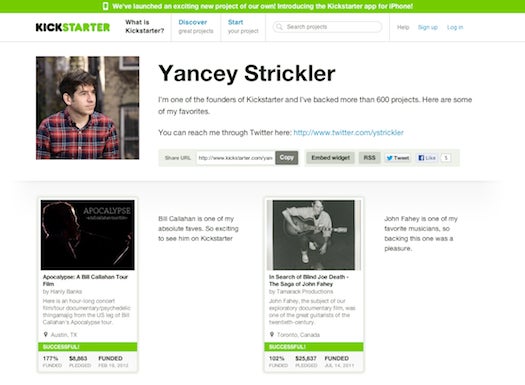 Most independent inventors don’t have bottomless bank accounts. To fund their dreams, many innovators are appealing to strangers on the Web for help. Kickstarter co-founder Yancey Strickler weighs in on this growing source of grassroots venture capital.

How does crowdfunding work?
Traditional funding channels support things with the potential to create revenue—you’re looking for hits. On Kickstarter, people fund the ideas that they think should exist. People have always had great ideas, and others have always wanted to be a part of them. We’ve made a space where that can happen on a massive scale.

The JOBS Act allows people not just to back projects, but also buy equity in them. Will that benefit both inventors and crowdfunders?
Kickstarter won’t switch to an equity-based model. We believe the real disruption comes from people supporting things because they like them, rather than finding things that produce a good return on investment.

What do you hope—and expect—will happen with crowdfunding over the next five years?
The ultimate goal is that in five years, Kickstarter looks largely the same—but the rest of the world looks a lot more like Kickstarter. We’re already seeing that happen, in the sense that there are now things all around us that were created by us and by our peers.

Do you think the growth of crowdfunding and the growth of hackerspaces is connected?
That’s an area we really love: The two dudes with an interesting idea they want to try to create. The degree of transparency that happens with a Kickstarter project is really remarkable. That’s not something that has ever existed before—that you actually see how something you use was made and really be a part of it.

On Kickstarter, inventors develop and build projects in a very public forum. What’s the benefit of being so open?
You come to Kickstarter not just to raise money, but to build a community around your project. Money gets spent, but a community will last forever if you do your job right. And those people will cheerlead you all along the way and give you feedback and be there for your next thing. That’s a true asset.

Yancey Strickler is a co-founder of Kickstarter, which has funneled more than $435 million from the site’s users to about 37,000 projects. Strickler has personally backed nearly 800 projects on Kickstarter.