Test Drive: GM’s EN-V Electric Transporter, Half a Smart Car On a Segway Base

I took a ride in the automated, wirelessly communicating EV-V in a Las Vegas parking lot 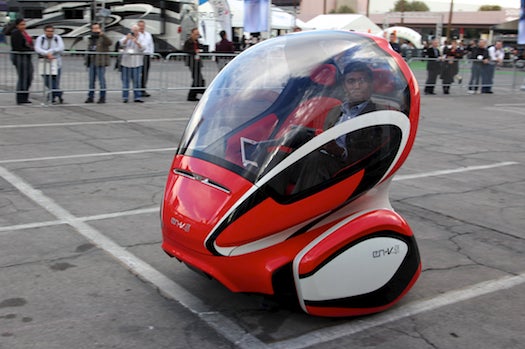 GM’s EN-V concept (it stands for “Electric Networked Vehicle”) is designed to fill the niche of urban, short-range transport, where space is limited but travel distances are typically shorter than suburban or rural drives. I saw three designs of the car (shaped like a deep-sea diver’s helmet, MF Doom’s mask, and Urkel’s clown car, respectively), all of which are about half the size of a Smart car and fitted on a two-wheel base co-designed by Segway.

The Segway base is called the “Skateboard,” though a skateboard actually does have four wheels and typically boasts a minimum of gyroscopic sensors. But that base allows the EN-V to turn in place, and as a bonus, looks really cool. Moving from “park” to “drive,” the entire chassis shifts back and forth on the gyroscopes to balance the cab’s weight, though you don’t actually feel it while driving. (The spinning-on-a-dime thing did give me immediate nausea, however.) The car itself is about half the length of a Smart car, which makes it about a quarter the size of a normal obese American parking space, and is about a third the weight of a typical sedan.

The EN-V’s communication aspect is pretty interesting as well–it uses sonar (you can hear the telltale clicking sound) to detect other cars as well as pedestrians and cyclists, though in the demo it nearly ran down a GM rep before stopping. That communication also allows it to perform something GM’s calling “platooning,” basically forming an autonomous convoy with other EN-Vs. The automation doesn’t stop there, as it’s also able to park and retrieve itself without the help of a driver. You can control its parking with a smartphone or a laptop.

Will the EN-V ever be released? Probably not, at least not in this form. The car would need to be enlarged to come to market–at the moment, it doesn’t have any storage space at all–and judging by my experience driving it, the automation needs a bit of work before it’s really safe. But a lot of the ideas in the EN-V are super futuristic and interesting, and the concept of an ultra-light, presumably ultra-cheap, urban-only car is one that’s just starting to be addressed.