I was thrilled last night, as I’m sure many of you readers were too, to see President Obama frame his... 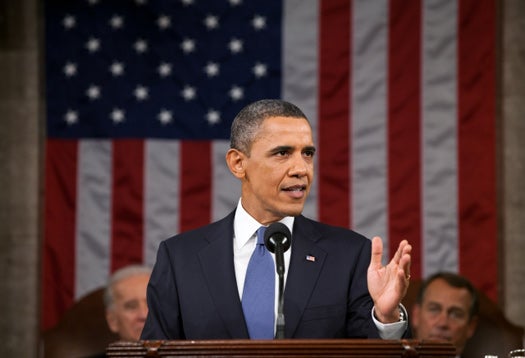 I was thrilled last night, as I’m sure many of you readers were too, to see President Obama frame his State of the Union address around the philosophy that Popular Science champions every day: Scientific and technological innovation is the single most powerful force propelling us toward a better life in the future. He even gave us, as a country, a new slogan and rallying cry: “win the future.” So, how exactly do we do that?

That, of course, is where things get complicated. Taking comfort in technology’s potential powers to fix what ails the nation is a common SotU trope. George W. Bush, on script, did it with global warming. And President Obama has internalized it as a core belief of his presidency. It’s inevitable: In the last decade alone, we’ve seen more and more of what constitutes success for a state directly shaped by the pace of innovation. Energy, finance, medicine, culture—there’s nothing that intensive technological development hasn’t transformed. This has always been the case, really–bigger bombs and smarter people have historically been effective benchmarks for the state of a nation. But never before has technology woven itself so deeply (and so quickly!) into literally everything we do.

The challenge for our presidents, then, is no longer about selling us on this idea. It’s about taking that as a starting point and actually getting things done.

“What we can do — what America does better than anyone else — is spark the creativity and imagination of our people,” Obama said last night. Aside from a more abstract sense of our can-do attitude, our indefatigable American spirit, there are other, more tangible sparks. Regulation, government spending, crisis–these are the things that have historically driven surges of innovation. And words like “regulation,” “government spending” and “crisis” are not exactly welcome in our current political dialog.

First, let’s talk about regulation. To see how smart, considered regulation can drive innovation, you don’t have to look very hard: 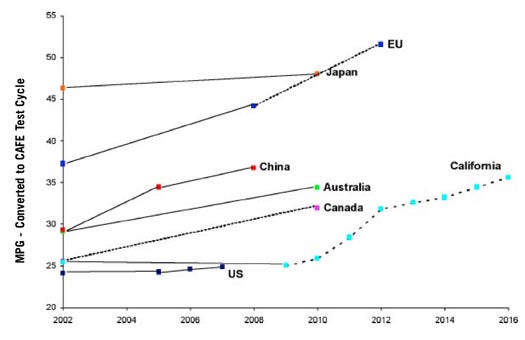 This figure, published by the Pew Center on Global Climate Change in December 2004, shows a standardized comparison of fuel efficiency regulations around the world. It remains a sad chart, one that illustrates directly how a lack of regulation can stunt innovation toward absolutely critical technology. We can talk and dream all we want, applying plenty of American gumption, about how great the day will be when our cars don’t burn so much expensive gasoline, emit less greenhouse gas, or maybe even forsake fossil energy altogether. But a firm nudge, perhaps uncomfortable at first, is often what it takes to get behemoths like our auto companies into action. It’s clearly worked elsewhere around the world.

Encouragingly, regulation wasn’t omitted from Obama’s speech entirely. “When we find rules that put an unnecessary burden on businesses, we will fix them,” he said to applause. “But I will not hesitate to create or enforce common-sense safeguards to protect the American people.” Even with its context here in consumer protection, it’s nice to hear the word “rules” spoken at least. We need more.

The other two sparks–government spending and crisis–often appear in close proximity. One of the leading sound bites of the night was our current “Sputnik moment,” referring of course to the great national wake-up following the Soviet Union’s early lead in the space race, which kickstarted our own space program, along with a general push for better math and science education.

As Fred Kaplan over at Slate points out as well today, our response to Sputnik was fueled above all by massive amounts of government spending. NASA did not yet exist, keep in mind, when Sputnik sent down its first beeps from orbit. That we put a man on the moon just 12 years later remains one of the most amazing things our country has ever done, but the reasons for our haste went beyond pure scientific curiosity. The space race was also an arms race, and when total nuclear annihilation at the hands of a single, powerful enemy is a possible outcome, money tends to more easily flow to high-tech sectors. That threat is what gave us the microprocessor, NASA and the Internet.

Summoning similar innovation in the midst of a financial crisis (and with regulation and spending being such unpopular words) is, of course, where the challenge lies. What’s encouraging is that the first step–selling everyone on the idea–seems to be complete. We can stand together now, knowing that the solution to so many of our current problems lies in our ability to innovate. Now, hopefully, the real fun begins.