On Planning a Transcontinental Trip (With Enough Time for Recharging)

With the majority of kinks worked out of the vehicle’s design (we ended up adding a light but functional fairing,... 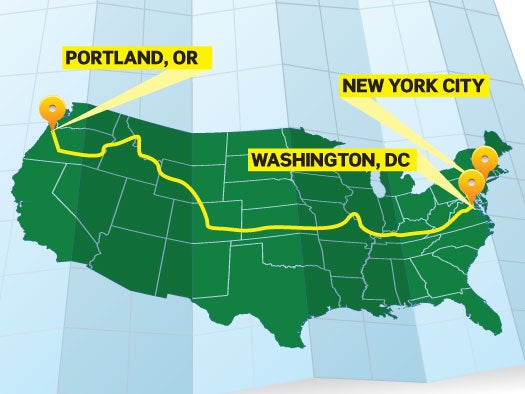 With the majority of kinks worked out of the vehicle’s design (we ended up adding a light but functional fairing, or shell-shaped windshield, and a sun awning), it was time to address the actual logistics of a cross-country road trip.

In a car, it can be as easy as hoping on an Interstate highway and fighting boredom for 2,000 miles. Our vehicle would not be legal on limited access highways, and we had no desire to run it on any type of busy road, which would make planning our trip both trickier and more important.

Unlike a bike, which could cower over on the shoulder of the blacktop, we’d need a full four feet of roadway. Because of our width, overtaking us would require drivers to wait for a gap in oncoming traffic before passing, as if we were driving a regular car (albeit a slow one). This would undoubtedly lead to a few angry honks, but on the plus side, it might eke out a bit more room on the side for cyclists.

In the interest of increasing our visibility on the road, we had already added a roll bar-like structure, with red flashing strobe-lights attached, to the rear of the vehicle. But rather than rely on the legendary vigilance and courtesy of the American driving public, we knew the best strategy would be to avoid confrontation whenever possible. In addition, we had no desire to spend the entire summer on the shoulders of major highways or inching through city traffic.

Long distance cyclists have faced similar challenges for years, and have come up with a network of roads that span the continent, connecting back roads and scenic routes that lead through small towns, countryside and some of the most scenic public lands in the nation. By following one such route known as the TransAmerica Bike Trail, we would ultimately travel 1,200 miles farther than a driver heading for both coasts on four-lane highways, but we saw it as a worthy trade-off, considering the benefits.

The route was well documented, but we would face one additional logistic challenge unique to our choice of vehicle. With fully charged batteries, our realistic range was expected to vary from a low of 30 miles if there were heavy climbs involved, to as much as 60 miles in flatter areas. To keep weight under control, we’d limited the battery pack to a total of 1,400 watt-hours – just better than half of our daily ration of 2,400 watt-hours. Key to our daily strategy would be a mid-day stop for rest, recreation and a quick recharge. Well, actually, not so quick, as it would take about three hours to bring deeply discharged batteries back to full capacity.

The variables of daily mileage expectations, vehicle range, recharge requirements and our desired stops at various points of interest had to be blended into a working itinerary. We ended up spending more than a few evenings at the computer, poring over Map My Ride’s trip planner. An added advantage of using this site was that, in addition to providing exact mileage on a Google Maps overlay, the software showed mile-by-mile elevation changes, which would affect our ultralight vehicle immensely.

When we set out on June 2, we’ll have an intricate route map that meanders along hundreds of small secondary roads, with a precise schedule of stops. Chances are that weather, breakdowns and a host of other variables will amend that schedule, but we’ve also built in some degree of flexibility to account for such delays.