With special appearances by Coca-Cola, Kodak, and a half-naked Charles Atlas 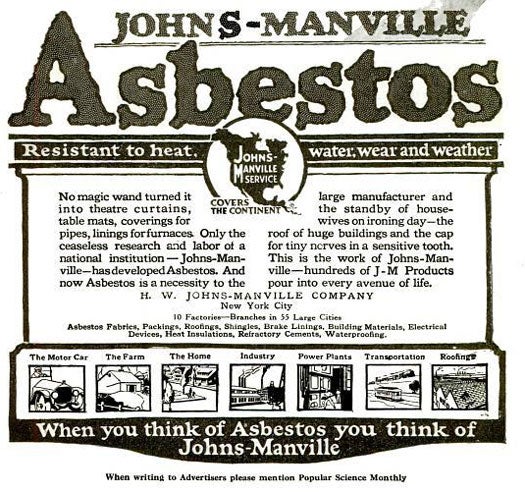 I haven’t been completely fair in the material I select for these archive galleries. In between covering space colonies and robots, I’ve neglected a feature of PopSci that is as prevalent in the year 1900 as it is now that we’re nearing 2011: the advertisements.

I’ve come across plenty of illuminating, if not peculiar, stories while browsing the Popular Science archives. Take, for instance, an article from 1923 about the possibility of discovering a polar paradise, complete with hot springs and fertile plateaus, while exploring Antarctica by dirigible. Other features, like this scientific analysis of JFK’s assassination, provide an immediacy often lost in history books and documentaries. But the ads capture everyday life in a way all their own.

Advertisements from bygone eras can look totally different than the ones on our pages today, but when it comes to tapping our emotions, many of them still hold up rather well. There’s a Coca-Cola ad from 1920 showing a typical day in the neighborhood: parents push their buggies down the sidewalk and gentlemen bike alongside Model T’s while blue-collar workers sitting on the edge of a manhole down bottles of “delicious and refreshing” cola. Sounds a little reminiscent of “welcome to the Coke side of life,” doesn’t it?

There’s also a Kodak ad that ran during the summer of 1918, a tough year for families who had sent fathers, sons, and brothers abroad to fight in the Great War. In classic heartwarming Kodak fashion, the advertisement encouraged families to use their cameras as a pictorial autobiography, in case memories faded–or, the accompanying image suggests, in case a family member died on the battlefield, leaving nothing but a final photograph to remember him by.

On the other hand, we ran plenty of advertisements that are now considered silly and politically incorrect. There’s an ad for deodorizing soap suggesting that funky-smelling armpits will cost you the love of your husband. There’s another one touting asbestos as a necessity in the home. Yet another assures you that an Atari computer will serve you better than a Mac.

Even more of the ads aren’t particularly funny or informative; they’re just pretty, thus rendering even the loveliest of ads on this website a little dull in comparison. If you’re not convinced, click through our gallery and see if you don’t feel like buying a phonograph on eBay afterward. 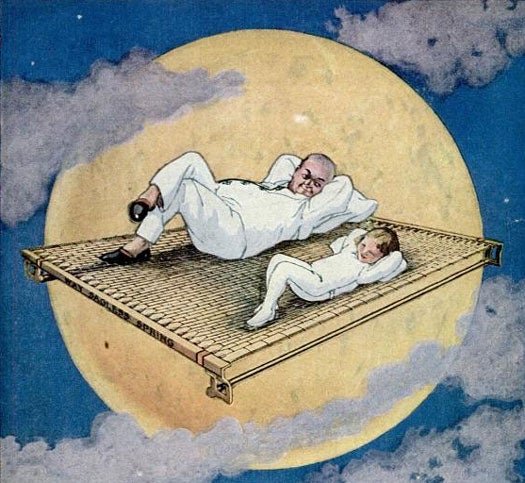 If this advertisement doesn’t personify the phrase “beautiful nightmare,” I don’t know what does. Clearly, the Way Sagless Spring company was aiming for a “sweet dreams” effect here, but what can we say, some illustrations just don’t hold up over time. All joking aside, Way Sagless Spring, a mattress company based in Minneapolis, used the motto “Sleep That Really Rests You,” claiming that their mattress would leave you “refreshed and invigorated,” as its bedsprings were noiseless, sanitary, and not damaging to bedding. See the full ad here 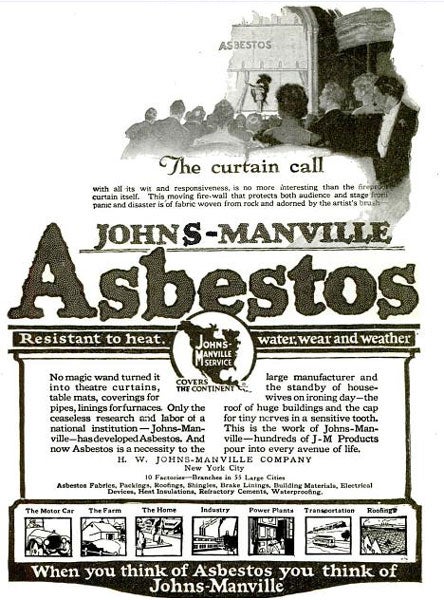 Well, this is a little awkward in hindsight. In the early 20th century, the H.W. John-Manville company was a major asbestos manufacturer for roofing and insulation materials. Like this advertisement claims, asbestos were a necessity for housewives on ironing day, for dentists who needed to fill cavities, and for the construction of farms, cars, and power plants. Even theater curtains and table mats were infused with Johns-Manville-manufactured asbestos. “Hundreds of J-M Products pour into every avenue of life,” the company boasted, unwittingly dooming scores of eager customers to cancer and other asbestos-related diseases. In the 1980’s, the company faced major class action lawsuits, culminating in a chapter 11 bankruptcy protection that took five years to resolve. See the full ad here 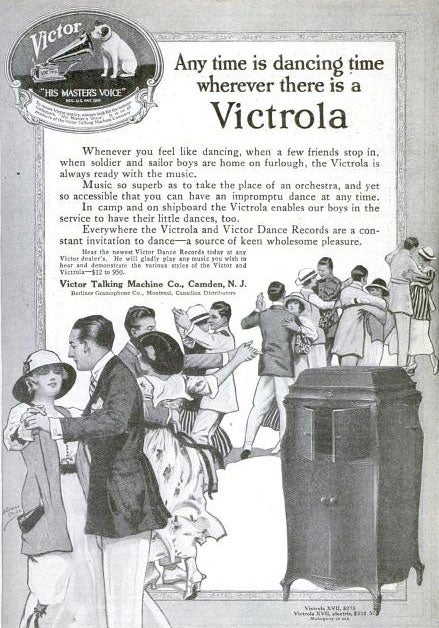 Around the turn of the century, people wearied of industrial-looking gramophones and began looking for something that looked less like a machine, as machines were aesthetically displeasing in one’s living room. In 1906, the Victor Talking Machine Company unveiled the Victrola, a phonograph that concealed the amplifying horn and turntable within an elegant cabinet. The original was such a hit that the company released several variations ranging from $15 to $500, including small table-top versions and Chippendale models made of fine wood. By the 1920’s, the Victrola had become the most popular home phonograph. Of course, we couldn’t forget that there was a major war going on at the time. “In camp and on shipboard the Victrola enables our boys in the service to have their little dances, too,” the advertisement says. “Everywhere the Victrola and Victor Dance Records are a constant invitation to dance–a source of keen wholesome pleasure.” Indeed, America was on the cusp of a major turning point in dance, as the Jazz Age loomed just a few years ahead. See the full ad here 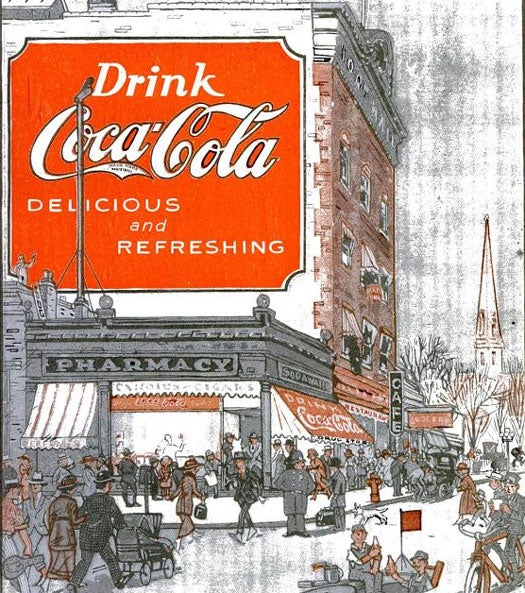 We don’t need to tell you much about this company. By the summer of 1920, Coca-Cola was being sold all over the United States and Canada, albeit in bottles instead of tin cans. While its tagline back then was “Delicious and Refreshing,” the applicability of 2005’s “Welcome to the Coke side of life” is a testament to the company’s timelessness. See the full ad here 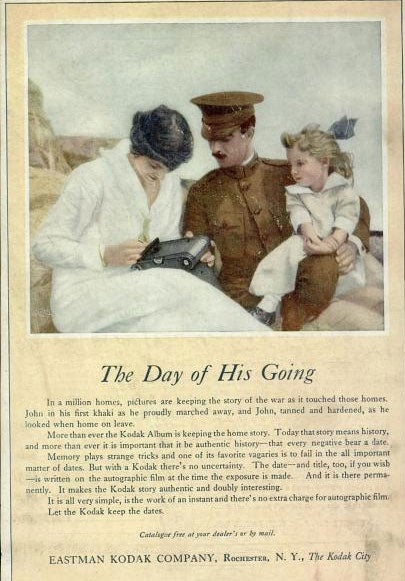 The family-centered, nostalgic quality of Kodak’s advertisements can be traced all the way back to the early 20th century, when the company focused on the camera’s role as a story-teller and memory keeper. In this advertisement, Kodak emphasized how their cameras could help worn-torn families capture important moments. Memories fade, Kodak said, so let our photographs serve as autobiographies. “In a million homes, pictures are keeping the story of the war as it touched those homes,” this advertisement says. “John in his first khaki as he proudly marched away, and John, tanned and hardened, as he looked when home on leave.” All right, so that’s a little depressing, but it sure as hell sold cameras. See the full ad here 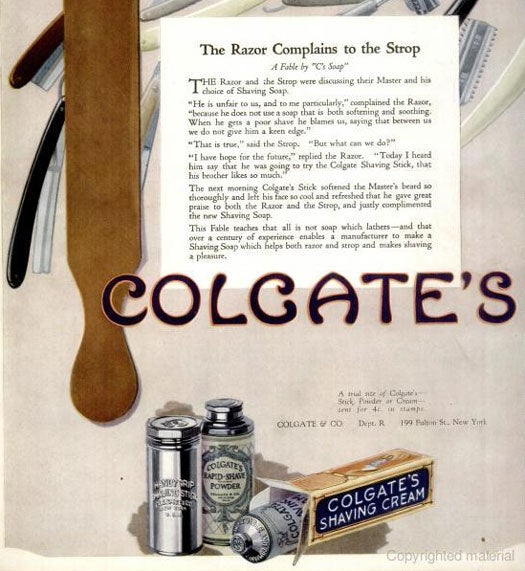 Although Colgate’s since become known for its oral hygiene products, the company’s shaving products, such as its Shaving Stick, Rapid-Shave Powder, and shaving cream in a tube (a new development back then) were quite the necessity. The Shaving Stick, pictured in a silver tube, was a stick of refillable aftershave that could be screwed onto Colgate’s “Handy Grip.” See the full ad here 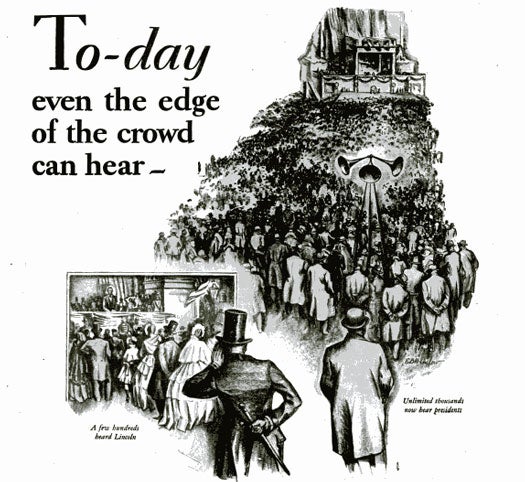 “At present-day inaugurations of Presidents of the United States, everybody in the vast crowd assembled at Washington is able to hear every word of the ceremony,” Western Electric said in this advertisement for its Public Address System. Only a few hundred people heard Lincoln’s Gettysburg address; now, thousands can hear Herbert Hoover delivering a speech. The future is now! See the full ad here 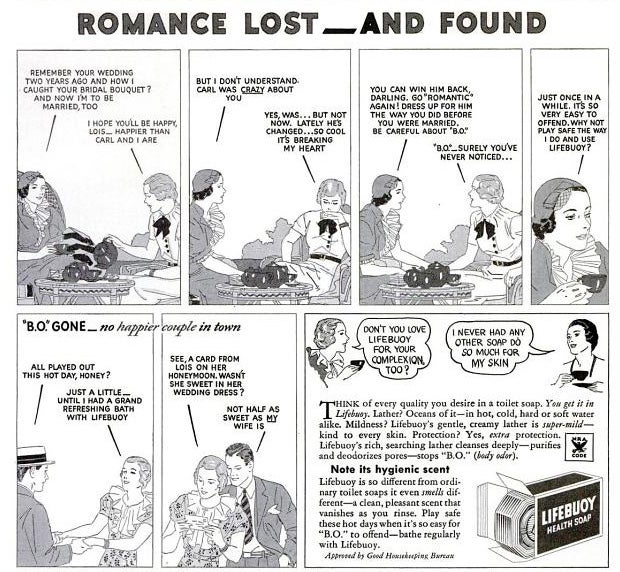 The 1930’s, which closely preceded America’s Golden Age of Comic Books, were more or less the golden age of funnies. Of course, advertisers had to cash in on the trend, and we’re happy to report that these ads remain funny up to today. In 1938, the Lifebuoy soap company ran a series of advertisements showing how their products could improve people’s love lives. In this one, Lifebuoy comes to the rescue after a woman’s body odor causes her marriage to go cold. See the full ad here 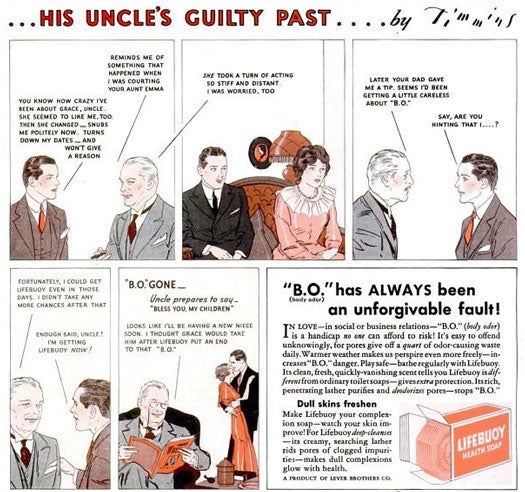 Okay, so the last comic might have been a little misogynistic (hey, it was the 1930’s), but men weren’t exempt from body odor, and thus the Lifebuoy treatment, either. In this advertisement, a man consults his uncle after getting stood up by his girlfriend. “Looks like I’ll be having a new niece soon,” the uncle says, once Lifebuoy finished remedying the man’s love life. “I thought that Grace would take him after Lifebuoy put an end to that ‘B.O.'” See the full ad here 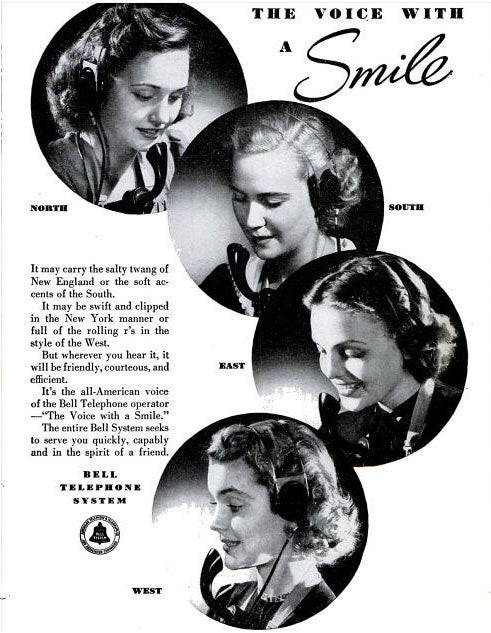 Today, people love complaining about the thick accents and inefficiency of telephone operators and customer service representatives, but in 1938, the Bell Telephone System would have none of that. “It may carry the salty twang of New England or the soft accents of the South,” they said. “It may be swift and clipped in the New York manner of full of the rolling r’s in the style of the West. But where you hear it…It’s the all-American voice of the Bell Telephone operator.” See the full ad here 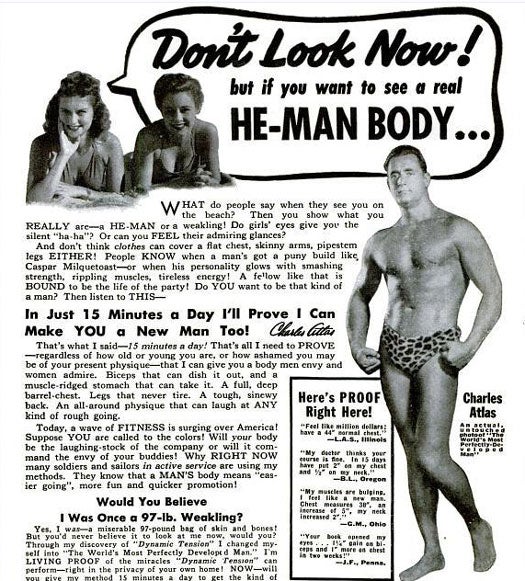 Charles Atlas, a Sicilian bodybuilder who moved to Brooklyn in the early 1900’s, became one of the 20th century’s most famous musclemen after he released an extensive series of print advertisements, such as the one pictured here. His fitness method, which claimed that he’d trained himself from a “97-pound scrawny weakling” to a champion bodybuilder, promised a “He-Man” physique to men who would work his routines just 15 minutes a day. “Do girls’ eyes give you the silent ‘ha-ha’? Or can you FEEL their admiring glances?” this advertisement asks. “And don’t think clothes can cover a flat chest, skinny arms, pipestem legs EITHER!” See the full ad here 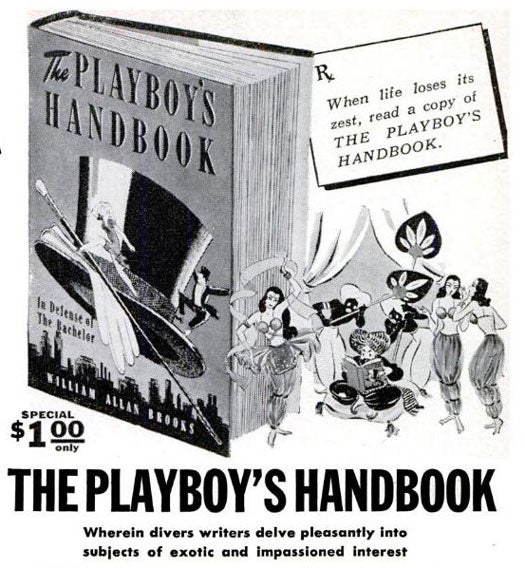 Who knew that we were once so invested in helping our readers get frisky? The Playboy’s Handbook, which “gathered in one pleasure-laden book, all the necessary ingredients for every gay playboy,” contained humorous how-to chapters with titles like “Have Fun With Your Clothes On” and “Just A Freudy Cat.” See the full ad here 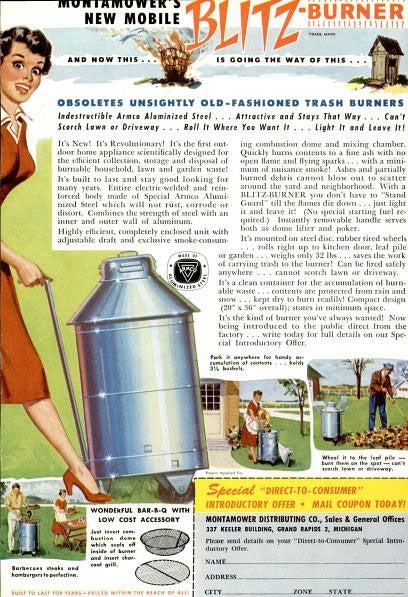 A mobile trash burner that doubles as a barbecue grill, just what a 1950’s housewife always needed. Made of aluminized steel and weighing only 32 pounds, Montamower’s Blitz-Burner promised to burn trash without causing a small fire in the front yard. “With a BLITZ BURNER you don’t have to ‘Stand Guard’ till the flames die down,” the company said. “Just light it and leave it!” No fuel required! Plus, like we mentioned earlier, you could turn the trash bin into a barbecue simply by inverting the combustion dome. See the full ad here 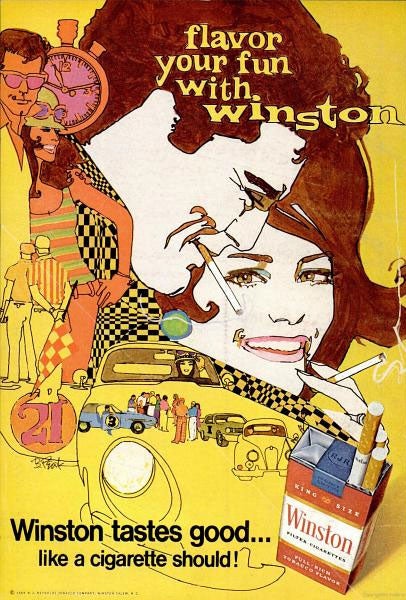 Sometime during the 1960’s, advertisements got pretty. While most cigarette ads, especially in decades prior, featured classy old gentlemen smoking away, this one for Winston captures the psychedlic, carefree spirit of 1960’s youth. See the full ad here 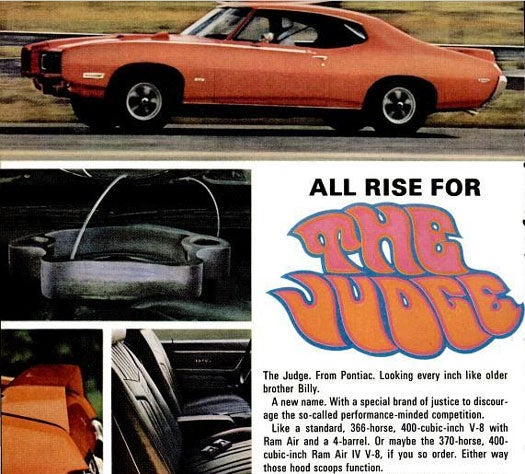 Speaking of the 1960’s, check out this groovy ad for the Pontiac Judge, which came with “a special brand of justice” that “regards chips, dings, and scrapes as acts of treason.” Named for a comedy routine popularized by Sammy Davis, Jr., the Judge sports car was developed as a special low-cost, stripped-down model of the Pontiac GTO. See the full ad here 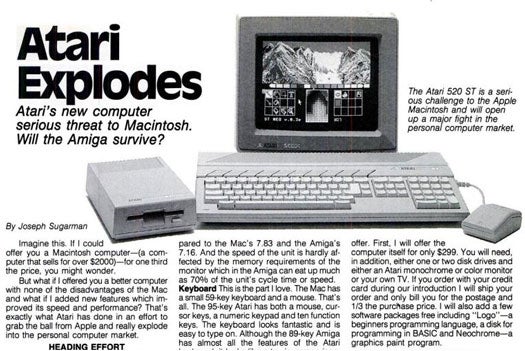 Back in the 1980’s, Atari attempted to conquer the PC market with a 16/32-bit computer system called the Atari ST. In February 1986, writer Joseph Sugarman published a JS&A-sponsored; article arguing why the Atari 520 ST would overthrow the Macintosh as the PC du jour. Firstly, the Atari ST had 256,000 pixels, almost a third more than the Mac had at the time. Secondly, the Mac could use only a 9-inch monochrome monitor, while the Atari came with a 12-inch monochrome and was could be hooked up to a TV set. Thirdly, the Atari cost only $699, as opposed to the $1800 price tag attached to the Mac. “If you’re not convinced that the Atari is far superior to your present computer and a fantastic value, simply return it and I’ll refund your modest down payment plus our postage and handling charges,” Sugarman said. We have a feeling he came to regret that. See the full ad here
Popsci Archive