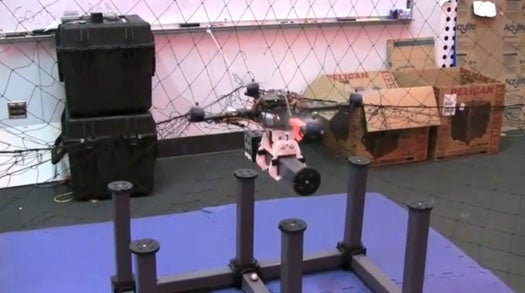 Whenever a new video emerges from UPenn’s GRASP lab (that’s General Robotics, Automation, Sensing and Perception), it’s usually awesome, and this one is no exception. A team there has been developing innovative quadcopter tech that not only maneuvers impressively well, but also works autonomously and in teams of multiple quadcopters. Coupled with a gripper designed to pick things up, the quadcopters have in past videos exhibited the ability to work in concert to pick up heavy objects, so it was only a matter of time before the quadcopter crews started building things autonomously.

That’s exactly what they are doing in the video below. A team of quadcopters working from a preset algorithm is shown constructing a cubic tower structure using specially designed parts that snap together via magnets when placed in the proper arrangement. The only human intervention is the design itself; once the algorithm is set, the ‘bots go to work. They can even judge the quality of their own construction, checking to make sure a piece is properly in place before moving on to the next segment.

Naturally, it’s not hard to see just how amazing this technology could be if scaled up and let out of the lab. Beyond the obvious applications in automated construction processes, swarms of construction ‘bots could be launched from naval vessels to autonomously construct shelters in disaster-stricken areas or to set up a forward operating base before live troops arrive in a combat zone.

Until that day dawns, we’re more than thrilled to watch these quadcopters do the heavy lifting around the lab. Several more GRASP Lab vids are available via team member Daniel Mellinger’s YouTube channel.