A Tour of The Modernist Cuisine Kitchen Laboratory 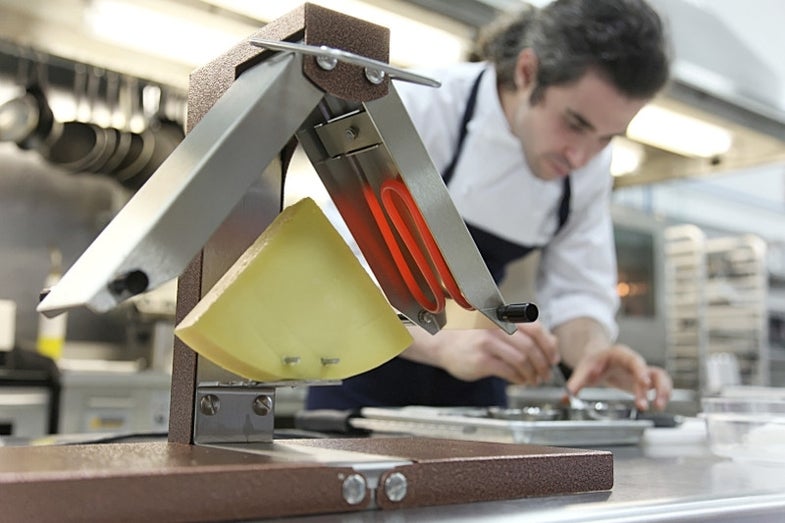 Skewered on the raclette grill, a piece of custom-made emulsified cheese that was concocted in the lab from Comte, gruyere, and gouda. The grill roasts the edges of the wedge to perfection, and the emulsification ensures that the cheese doesn't separate into a greasy, curdled mess. Paul Adams
SHARE

In 2008, Dr. Nathan Myhrvold began to carve out a portion of the 20,000-square-foot warehouse outside Seattle that houses the research lab of Intellectual Ventures. The former Chief Technology Officer of Microsoft had an idea for a cookbook he wanted to write, and he needed some kitchen space.

Maxime Bilet, the kitchen’s head chef of R&D and a co-author (with Myhrvold and Chris Young) of the ambitious cookbook, led me through the kitchen, where four full-time staffers were in the process of making me lunch using a variety of outre apparatus. The usual kitchen accoutrements were on display — stove, sink, cutting boards, refrigerators — but Bilet’s tour started with the ultrasonic bath.

An appliance commonly used by jewelers and dentists, it runs super-high-frequency vibrations through a water bath, cleaning the grime off whatever’s submerged in the water via high-energy cavitation. The team discovered that subjecting cut potatoes to the bath creates tiny fissures in their surfaces; which, when the potatoes are French-fried, result in a much crispier exterior. From the ultrasonic bath we proceeded to the chamber vacuum sealer, the ultra-high-pressure homogenizer, the rotor-stator homogenizer — well, just see the gallery.

The warehouse also houses a bio lab, mosquito hatchery, chemistry lab, “small things room,” a machine shop, a photo studio, and more. As in the rest of the lab, much of the equipment in the kitchen was bought used on eBay and Dovebid. And the working kitchen I toured only contains a fraction of the equipment owned by the project — there’s a 30,000-square-foot warehouse nearby full of items that aren’t in active use.

What’s in store next for this amazing kitchen? The cookbook comes out next month, and for the present, the team is using the equipment to homogenize and freeze-dry meals for members of the press like myself as part of the promotional effort. And after that? I asked Myhrvold.

“We could do another book. An obvious thing to do as a follow-on would be pastry, dessert, and baking. But, of course, I do have a day job, so the next thing might be curing malaria, or building nuclear power plants to create a carbon-free future. Who knows?”