Testing the Best: Driving Fast in the Ferrari 458 Italia

On video games and the perfect Ferrari 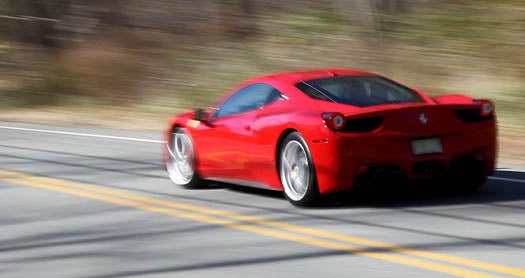 In reviews of Gran Turismo 5, the long-anticipated PS3 version of the ultra-realistic driving sim, critics pointed out the difficulty of distinguishing screen grabs from the game with actual photos of real-life cars. That’s one of the better indications of just how effectively video games have shrunken the gap between reality and digital representations of reality. But after driving the 458 Italia, Ferrari’s latest and greatest feat of hot-blooded automotive audacity, I realized something: the merger of digital and real realities works both ways. What makes the 458 Italia so remarkable is that Ferrari has made piloting a $230,000 sports car feel like playing a video game.

I approached our test drive, on a sunny and crisp November day, from what I imagine is a fairly unique perspective among the lucky journalists who’ve had the chance to test-drive the 458 Italia. I haven’t owned a car for the last five years, don’t really drive much, and have never buckled into anything as remotely powerful (or expensive) as the 458. I love high-performance cars, but my admiration is from afar.

So to prepare, I did what in hindsight is probably among the better things I could have done. I purchased the 458 Italia in Forza 3, switched on the manual transmission, and logged some laps from my couch, just me and the Xbox.

Getting behind the wheel for real twelve hours later, it’s striking just how similar the two experiences are. The Italia’s semi-automatic, dual-clutch transmission has no clutch pedal to work (good thing, because I’m not the handiest with a stick-shift). Which makes firing off gear changes with the massive metal paddles behind the steering wheel (described beautifully by someone who has more grounds for comparison than I as “buttered-lightning”) feel not at all unlike working through the gears with the A and B buttons on my Xbox controller. Had I been driving hard on a track, the Italia’s state-of-the-art traction control system would be there to keep all four wheels on the ground. Just like in Forza, purists can opt out of the car’s digital assistance with the flip of a switch (something we were strongly discouraged from doing by our considerate handlers at Ferrari, who were looking out for us). In reality, there are no bonus points for eschewing safety; just thrills. 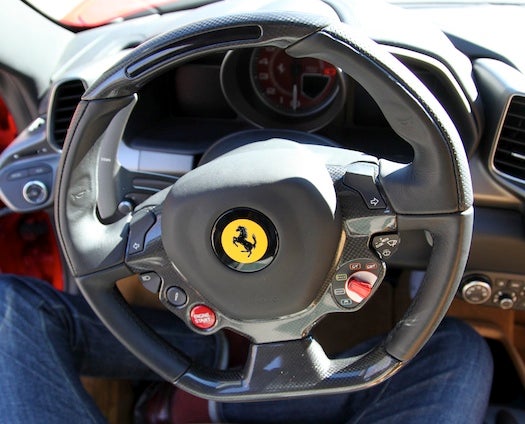 Looking straight out of an F1 cockpit, the steering wheel has buttons for everything from turn signals to wipers to traction control; no stalks to block your grip of the huge metal paddle shifters behind.

Which brings us to the very important thing that the Xbox cannot yet provide: the truly indescribable feeling of stomping on the 458’s waiting gas pedal and hitting 60 mph from a rolling slow-start in 3.4 seconds, popping off gear shifts at the behest of the blinking LEDs on the top of the steering wheel (right there in between your white bloodless fists). I’ve ridden some serious roller coasters. I’ve sat in the passenger seat of some pretty fast cars burning out. I’ve even been shot into the sky from the top of a 1,000 foot tower. None come close to matching the giddy brain fizz of 0-60 behind the wheel in the Italia.

Trading lucky Ferrari stories with another non-gearhead in the days following, this feeling naturally came up. “It’s like…hooo,” she said, shaking her head and tapping on the inside of her elbow with two fingers, implying heavy intravenous narcotics use. Neither of us have ever shot heroin, but the metaphor seems apt; I can see how that full-body rush of endorphins could become dangerously addicting.

So does the 458 Italia provide the ultimate raw automotive experience, or the ultimate digital driving simulation? I would argue both. With so much of the car’s operations handled via perfectly responsive automation (it’s trust, really), everything but the pure joy of driving fast and hard drops away. I’m no expert, but that’s sounds an awful lot like the perfect Ferrari to me. 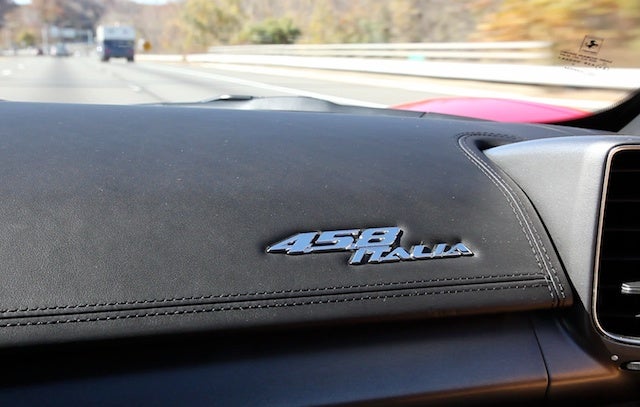 Just So You Remember… 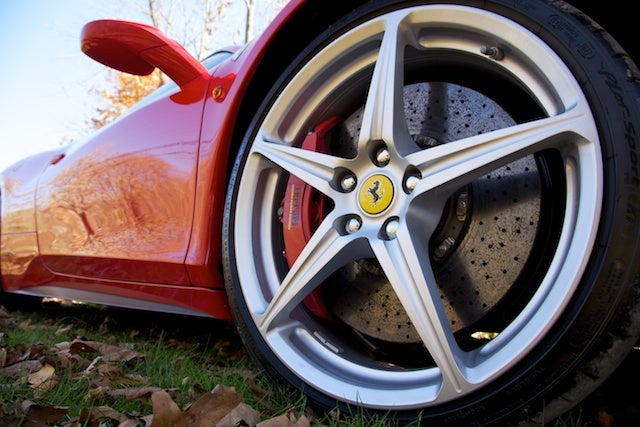 The Italia’s brakes have plenty of room to breath, should you find the need to use them. 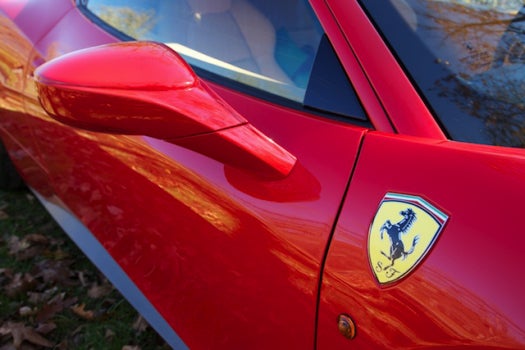 Again, in case you forgot…the stallion is there to remind you. 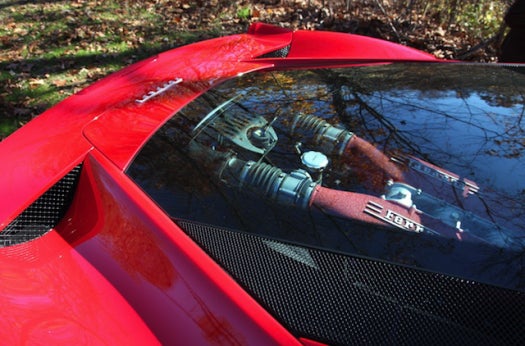 The 562hp, 4.5-liter, normally-aspirated V8 sits under glass behind your head. And what a noise it can make from back there. 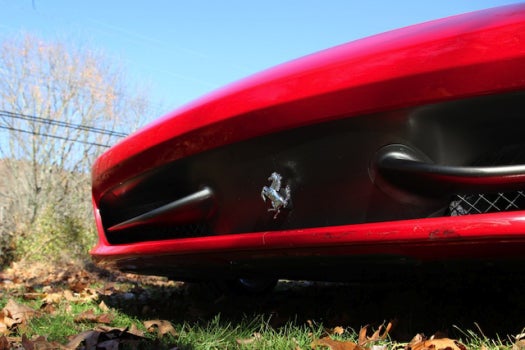 Two large, rubbery fins in the 458’s nostrils distribute cooling to the brakes, gearbox and engine. The silver stallion looks on. 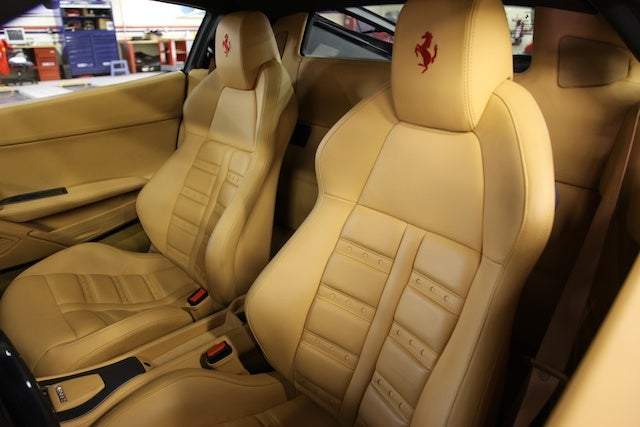 Don’t those look comfortable? They are.

Looking straight out of an F1 cockpit, the steering wheel has buttons for everything from turn signals to wipers to traction control; no stalks to block your grip of the huge metal paddle shifters behind. 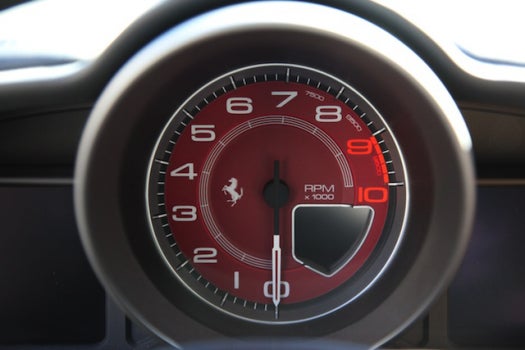 Dominating the instrument panel is the tachometer; speed is relegated to a much smaller gauge below and to the right, as if to say “no need to look down, your speed is ‘too fast.'” 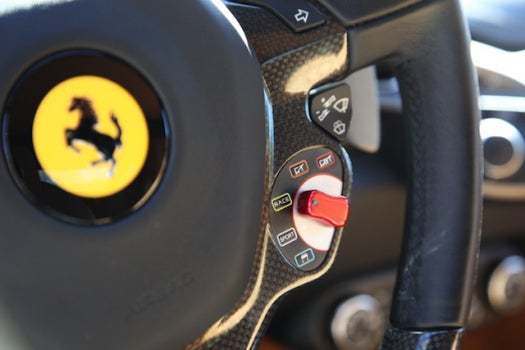 It seems that anyone writing about a Ferrari must make a witty comment about what the Italians call the manettino, otherwise known as the control dial for the Italia’s high-performance traction control system. Hard to imagine ever setting it to something other than “Race.” 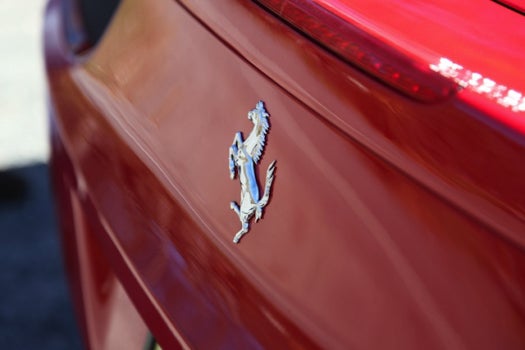 A pretty view, for the gawkers behind. 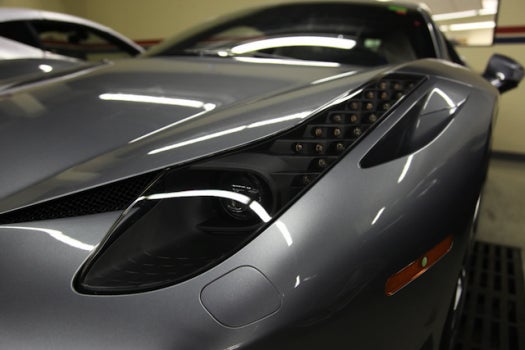 Sexy In Silver Too

The twisty LEDs of the headlights look forward.
Best of What's New
Vehicles