BMW's latest design and powertrain study may have a clinical-sounding name, but beneath that avant-garde skin and lab-coat-tested powertrain beats the heart of an ultimate driving machine 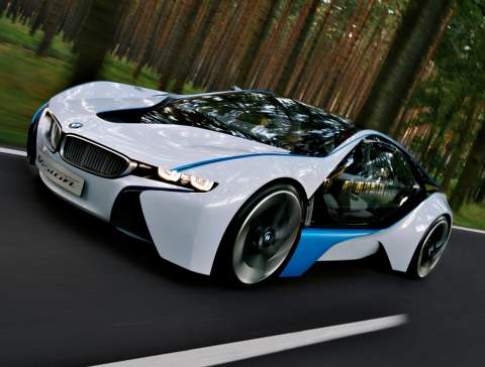 With its Vision EfficientDynamics concept, BMW projects how its hybrid and engine-efficiency technologies might couple with the company's Formula One racing tech and avant-garde design. BMW says the resulting two-door, diesel-electric sports car pulls fuel efficiency of 63 mpg while getting from zero to 60 mph in a quick 4.8 seconds. BMW
SHARE

BMW’s new experimental vehicle may get 63 miles on a gallon of diesel and can travel 31 miles in all-electric mode, but it also scores in the performance realm — with a zero-to-60-mph time in the de rigueur modern sports-car range of under five seconds.

Fans of progressive auto design will likely cock an eye at its posturing curves and layered surfaces, but the big story is the Vision’s plug-in hybrid drive system, which pairs two electric motors with a 1.5-liter, three-cylinder turbodiesel engine, together producing 356 horsepower.

The 3,000-pound Vision showcases BMW’s latest high-profile R&D efforts — including its ActiveHybrid drive technology set to arrive in its 7-Series sedan this year and its EfficientDynamics tech by which the company says it aims to cut fuel consumption without sacrificing driving dynamics. This by now-common features like automatic start-stop and brake energy regeneration. One notable example on the new concept of what BMW is calling EfficientDynamics is a new thermo-electric generator that can convert heat energy from the car’s exhaust into 200 watts of electric power. The Vision also employs BMW’s Formula 1 aerodynamics developments, by which engineers achieved a slippery drag coefficient of 0.22 (the Toyota Prius’s is 0.25).

BMW plans to unveil the Vision EfficientDynamics concept at the Frankfurt motor show in early September.

With its Vision EfficientDynamics concept, BMW projects how its hybrid and engine-efficiency technologies might couple with the company’s Formula One racing tech and avant-garde design. BMW says the resulting two-door, diesel-electric sports car pulls fuel efficiency of 63 mpg while getting from zero to 60 mph in a quick 4.8 seconds. 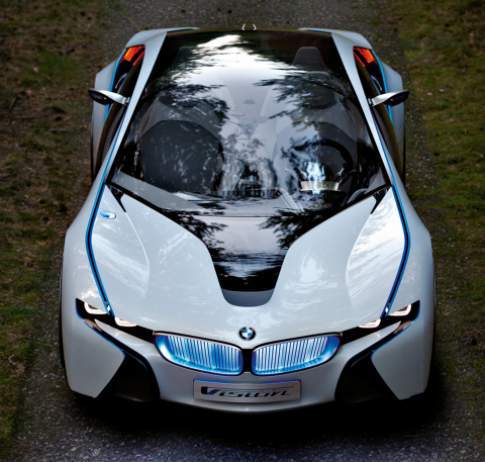 The Vision EfficientDynamics concept puts power to all four wheels by a three-cylinder turbodiesel engine displacing 1.5 liters, and two electric motors — one at each axle. Total output is 356 horsepower and 590 pounds-feet of torque. BMW says the plug-in hybrid can travel 31 miles in all-electric mode. 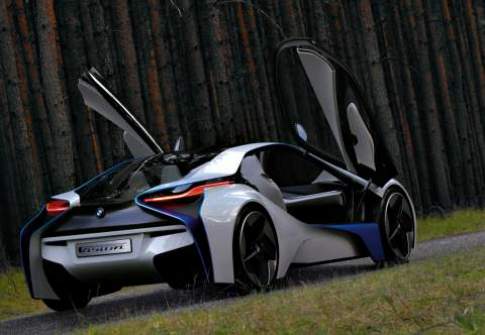 With technology developed in BMW’s Formula 1 racing program, engineers optimized the Vision concept’s aerodynamic drag coefficient to a Cd of 0.22. (the 2010 Toyota Prius has a Cd of 0.25). That drag rating is, of course, attainable only with the Vision’s scissor doors in the “down” position. 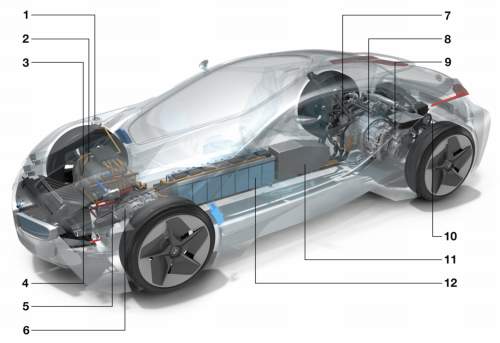 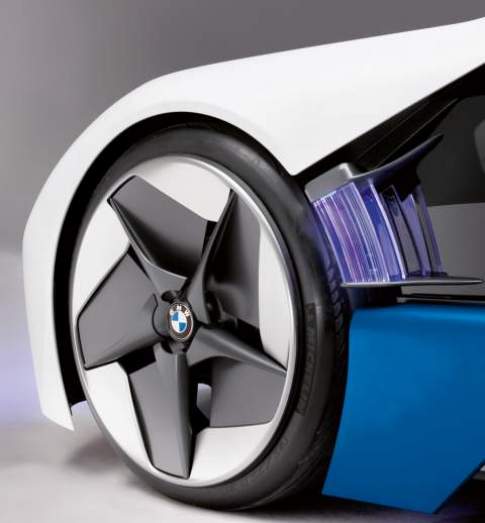 Like typical hybrid vehicles, the BMW Vision EfficientDynamics concept uses regenerative braking to charge the battery — a series of 98 lithium-polymer cells. BMW says the system requires 2.5 hours to charge on European domestic 220V power, but 44 minutes via 380V power. Engineers combined an 80-hp synchronous electric motor in the front with a full-hybrid system in the rear. In between a 1.5-liter turbodiesel engine and BMW’s twin-clutch DCT transmission is a 51-hp compact electric motor. The rear system corresponds with the ActiveHybrid system BMW will introduce in its 7-Series sedan at the Frankfurt motor show in September.

From the top, you can see the BMW Vision EfficientDynamics concept’s room for four adults. What you can see is something BMW calls “layering technology,” a design methodology in which surfaces are layered on top of each other to create smooth joints and seams, reducing the number of components and their corresponding weight. The BMW Vision concept weighs just 3,000 pounds. Not bad, considering the battery is nearly 200 pounds alone.
Electric Vehicles
Hybrid Cars
Vehicles
auto news
bmw
Cars
diesel cars
electric cars