Instant Expert: How Can We Tell If a Country Is Making Nuclear Power or Nuclear Weapons?

It's all about enrichment 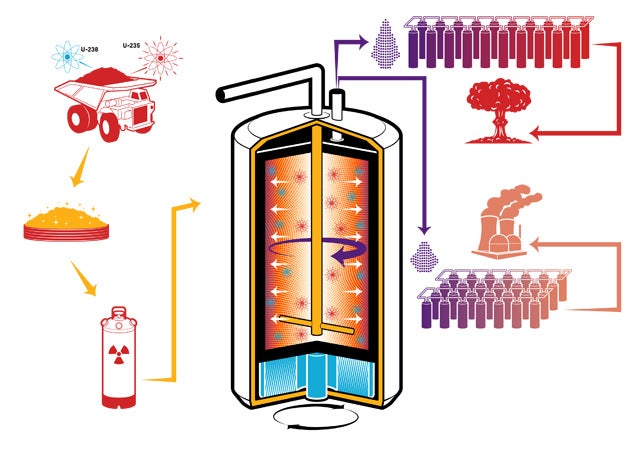 Centrifuges are usually arranged in a triangular cascade; the layout tips inspectors to its purpose. Weapons require heavily enriched uranium, so the triangle is long and narrow; power takes more fuel, so the cascade is short and fat. McKibillo
SHARE

Just about everyone insists that Iran’s nuclear program is aimed at building weapons. Iran claims it only wants nuclear power. So how do weapons inspectors get at the truth? They study the country’s supply and treatment of uranium, one of the most abundant nuclear materials on the planet.

Just one pound can produce energy equal to burning three million pounds of coal. To harness all that energy, the uranium must first be “enriched,” increasing the concentration of an unstable form of the element, U-235, which, when split, can release massive amounts of energy in what’s known as a fissile reaction. The configuration of the equipment most commonly used for this enrichment, called gas centrifuges, can tip inspectors to illicit intentions.

That’s because making uranium reactor-grade requires that 3 to 5 percent of its total concentration must be U-235 (nearly all the rest is U-238, uranium’s most common isotope). Nuclear weapons, however, require at least 90 percent. The arrangement it takes to hit that number can be a dead giveaway.

Centrifuges are usually arranged in a triangular cascade; the layout tips inspectors to its purpose. Weapons require heavily enriched uranium, so the triangle is long and narrow; power takes more fuel, so the cascade is short and fat.

Isotopes: Different forms of an element, defined by a unique number of neutrons (the number of protons is always the same)
Fission: An energetic chain reaction that occurs when a neutron bombards an atom’s nucleus and splits it in two, releasing more neutrons, which causes more collisions

A new technology in the works known as laser enrichment could make uranium enrichment easier and cheaper. The method furthest along is called SILEX, which uses lasers to selectively excite and separate U-235 molecules. An enrichment plant using this technology to make fuel could be under construction in the U.S. as early as 2012.

How to Make Nuclear Fuel

Step 1: Mine It
Uranium ore is mined mostly in Canada, Australia and Kazakhstan. Then it’s concentrated into a powder known as yellowcake and combined with fluorine to make uranium hexafluoride gas, or hex.

Step 2: Spin It
Centrifuges, which range in size from less than three feet tall for older models to four stories high for more modern ones, spin the uranium gas, or hex, in a chamber at up to 100,000 rotations per minute. This creates forces of up to 485,000 Gs. Heavier U-238 atoms move closer to the wall of the centrifuge, while lighter U-235 remains in the center. The hex containing more U-235 is considered enriched; the rest is “depleted” and discarded.

Step 3: Refine It
Because U-238 and U-235 differ in weight by only about five billionths of a quadrillionth the weight of a paper clip, one go in a centrifuge is not enough to separate the two and fully enrich the hex, so it must move through additional centrifuges. How these connect to one another—a configuration of rows known as a cascade—can yield clues to the fuel’s future uses. At each row, the uranium is slightly enriched and the U-235-rich hex moves up to the next row. Since power-plant uranium requires less enrichment, cascades for reactor-grade material have fewer rows, thus are “shorter.” Uranium intended for nuclear weapons, however, requires that more than 90 percent of the hex be enriched, so it uses taller, narrower rows.

Q. How many enrichment facilities are there in the world?
A. Around 20, and several others are under construction.

Q. What about plutonium?
A. Plutonium can also be turned into nuclear fuel, but it’s rare, so it has to be made artificially from depleted or natural uranium. Some countries have weaponized their plutonium, however, and North Korea has recently threatened to do that.

Q. Besides centrifuges, what clues can tip off inspectors?
A. The International Atomic Energy Agency, a nongovernmental organization tasked with policing the world’s nuclear activity, matches the amount of nuclear material going in and out of power facilities to make sure none is being squirreled away. In addition, inspectors can test water samples from nearby rivers and take samples from inside the plants to test for traces of weapons-grade materials.