An engineered lattice structure is in the midsole of the sneakers. 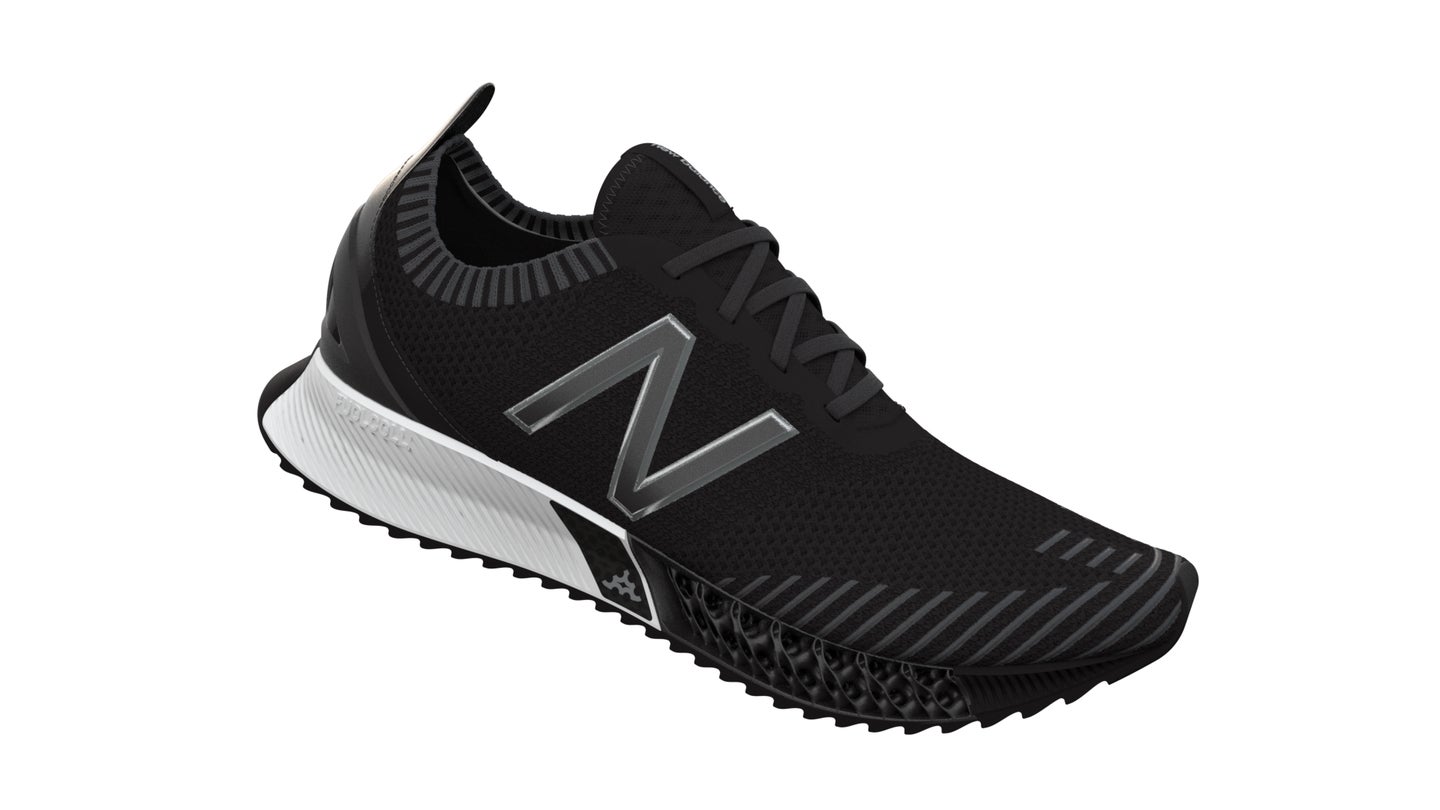 Take a look at a new running shoe called the FuelCell Echo Triple coming out from New Balance on Friday, and you’ll see that the forefoot—the section at the front—looks different. The black, lattice-like component at the toe-end of the shoe is the product of a 3D-printing process that allows its makers to design the structure of the material much more deliberately than it can with more common materials.

Traditionally, shoe-makers use foam and industrial molding to bring the pieces of the midsole together. “We use a lot of molds” in the footwear industry, says Katherine Petrecca, a general manager for studio innovation at New Balance. First, injection molding takes liquid foam and produces “a smooth bun of material that’s roughly the shape of the final part,” she explains. Then, that bun-like piece goes into a compression mold, which creates the final shoe component. The molded parts, made out of materials like EVA—that stands for ethylene-vinyl acetate—stick together with glue.

That’s the old way. The new method is different, and it involves a laser. New Balance is producing the 3D-printed parts using equipment from a company called Formlabs, and the process starts with a resin that has the consistency of olive or motor oil, says David Lakatos, the chief product officer at Formlabs. Zapping that resin with a blue-light laser spurs it to become a solid, only in the places they’ve hit it. The resin is technically a photopolymer, meaning that the light from the laser sparks the relatively short chains of molecules in it to join up and form longer chains.

The result is that the new component has a designed geometry that Lakatos compares to a “cellular sponge” with an organic feel. That’s different, of course, from the injection- and then compression-molded foam. “Foam is a homogeneous material,” Lakatos says. “Here you have the ability to really design parts of the material, of the sole, that respond very differently than other parts of the sole.”

EVA foam will naturally have a microscopic cellular structure that New Balance hopes is homogenous and consistent—you don’t want one component to have a lopsided feel—while in this case, with 3D printing, the larger cellular structure is deliberately engineered, layer by layer.

“In the forefoot part of the FuelCell Echo Triple, there are hundreds of precisely shaped structures that are your cushioning elements,” says Petrecca, of New Balance. The diameter of the cells that make up the lattice of the 3D-printed part of the new shoe range from about 5 millimeters to even around a centimeter in size.

The upshot is that New Balance says this new material is keeping its springiness longer. The coveted rebound and energy return properties of the shoe won’t degrade as quickly as they would with foam. In a statement, New Balance described the performance this way: “After 20,000 compressions (similar to the amount of compressions experienced during a marathon), the forefoot of the FuelCell Echo Triple retained its cushioning properties better than an equivalent foam forefoot.”

This newest shoe, the FuelCell Echo Triple, goes on sale this Friday for $175; this isn’t the first pair of kicks the company has put this new material in. Earlier this summer, New Balance released a shoe called the 990 Sport that had the same type of 3D-printed component in its heel. And other footwear companies are using 3D-printing in their shoes, as well: Under Armour, Adidas, and Nike are all experimenting with the tech.