Does a Splash of Red Make a Woman More Attractive? 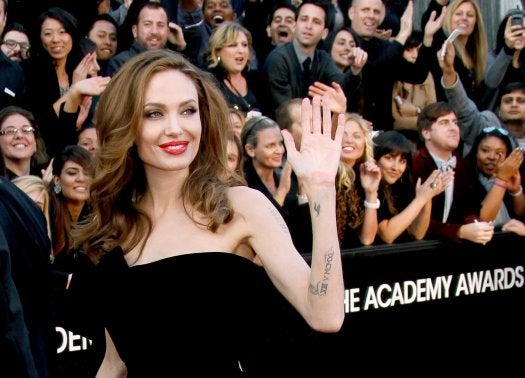 At the Oscars this year, Angelina Jolie paired a leggy black dress with bombshell hair. What stood out, though, was her bright red lipstick. I thought she looked great, and–according to science–most of the men watching agreed.

In 2008, psychologist Andrew Elliot at the University of Rochester and colleagues showed that men perceive women in red to be more attractive and sexually desirable than those wearing other colors. Two years later, Elliot documented that men sit closer to women in red and ask them more intimate questions. One thing Elliot hadn’t answered–until now–is why a lady in red is so hard to resist.

In his new study, published in the Journal of Experimental Social Psychology, Elliot posits that men see women in red as ready and willing, and that this sexual receptiveness is what makes them attractive and desirable.

The most obvious example of red as a sexual cue in nature is a familiar one. Increased blood flow during ovulation allows female baboons, chimps, rhesus monkeys and other non-human primates to display red coloration on their faces, genitals and hindquarters, signaling to males that they’re fertile and ready to mate. While this is pretty convincing on its own, there’s another example that hits closer to home: During human ovulation, hormonal shifts cause our skin-tone to lighten and blood flow to increase under the skin. Adam Pazda, the study’s lead author and a graduate student in Elliot’s lab, says these changes could make blushing more prevalent when women are most fertile, which could have predisposed men to interpret red as a sign of sexual readiness.

Red was used as early as 10,000 B.C.E. in lipstick and rouge to mimic the red blush of sexual interest and excitationTo test that red is a sign of sexual readiness in humans–and that it’s that signal that makes women who wear red attractive–Elliot, Pazda and Tobias Greitemeyer, a psychologist at the University of Innsbruck in Austria, ran a series of experiments on straight and bisexual men who were told they were participating in a study on first impressions. In the first experiment, men who were shown a picture of a “moderately attractive” woman wearing a red shirt rated her as more interested in sex than the same woman wearing a white shirt (the shirt colors were altered in Photoshop).

A separate group of men were shown the white-shirt images and then asked to read one of two scenarios: one in which the woman was acting sexually receptive at a bar, and one where she wasn’t. The men who were told the woman was interested in sex rated her as more attractive. (Both groups of men rated the woman as equally likeable, showing that sexual readiness specifically influences attraction, not just positive impressions.)

Finally, a third group of men were shown a picture of a different woman wearing either a red or a green shirt. Not surprisingly, the men found the women in red to be more attractive, sexually desirable and sexually receptive. But when the researchers looked at the effect of the shirt color and sexual receptiveness together on ratings of attractiveness and desirability, the shirt became less important and sexual readiness more.

So, now that we know that men view red as attractive because they see it as an invitation for sex, should women be a little more cautious about wearing the color? The researchers say yes. “From a pragmatic standpoint, our results suggest that women may need to be judicious in their use of red clothing,” they write. “Wearing red may be a subtle, yet powerful way to communicate sexual interest to a targeted male, but in public settings replete with eager male receivers, a red signal may result in unwanted sexual advances.” I told Pazda that some women might bristle at this message, as it puts the onus on them to avoid male interest, instead of making it a man’s responsibility to behave himself–no matter what color of shirt or lipstick a gal is wearing.

Did he think women who wear red are “asking for it”?

He answered no (of course), and explained that he thinks wearing red may be a double-edged sword for women, on the one hand making them appear more attractive, but on the other hand making them appear more sexually available. The distinction is subtle but real (and often lost on men): Just because a woman wants to look good at the bar doesn’t mean she wants to take someone home from the bar. He added that, “men should be just as judicious when forming impressions about women in red.”

Still, whether or not a woman is actually looking for sex when she wears red, 12,000 years of red lipstick tells us there’s some intention there, even if it’s just to get attention. Pazda and Elliot are currently conducting the first study to examine female motivations for wearing red. They’re collecting data to see if women on dating sites that cater to one-night-stands and casual sex are more likely to wear red in their profile pictures than women using services that cater to long-term relationships or marriage. Pazda’s team is also looking at how women perceive red on men. In that case, it’s probably not a sign of sexual availability, but of social status, they say. Turns out, everyone looks good in red.

Jennifer Abbasi is a science and health writer and editor living in Chicago. Follow Jen on Twitter (she’s @jenabbasi) and email her at popsci.thesexfiles@gmail.com.