The Dracula ant snaps its jaw shut 5,000 times faster than you can blink

It’s a snap, quite literally. 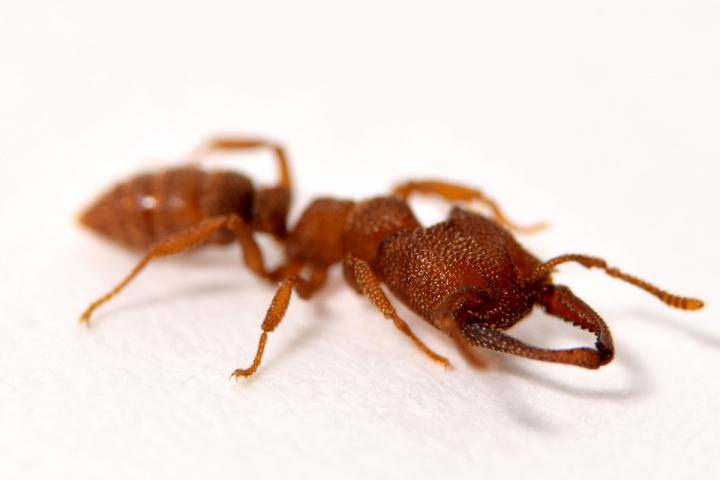 Dracula ants sound like they should be good at sucking your blood, not moving fast, but they just set a new record for the fastest animal movement: a snap.

Like human fingers, Mystrium camillae mandibles can slide past each other at blazing speeds, though the ants’ snaps are 1,000-times faster. At 90 meters per second (that’s roughly 201 miles per hour), their mandibles are the speediest body part around. What are their mandibles—that’s their mouth parts, in case you weren’t sure—even doing going so fast? They’re snapping. And yeah, that might not sound as exciting as how a mantis shrimp punches, but haven’t they gotten enough attention? Their punches are only a measly 23 meters per second.

Dracula ants are so under-appreciated that we don’t even really understand why they need to snap their mandibles so quickly. In a study published in Royal Society Open Science, biologists speculate that it might be a defense mechanism or possibly a method of attack. They weren’t able to measure the force generated by the M. camillae mandibles, but they point out that even tiny mantis shrimps are able to produce forces many thousands of times greater than their body weight—it’s reasonable that Dracula ants might produce massive power with their snapping mouth bits, too.

But for now, these biologists don’t care how forceful the snaps are. They care how the snaps happen in the first place.

Studying the fastest animal body parts isn’t just a matter of having interesting scientific trivia. It provides insight into how evolution can push limits, what tradeoffs are required for speedy motion, and how predator-prey relationships work in the animal world. Dracula ants, for instance, have come up with an apparently novel way to overcome to the problem of muscles. Muscle power can only get you so far—eventually, skeletal muscle reaches a point where it just can’t move any faster or with more force. As the authors point out, many arthropods have found ways to overcome that problem by evolving biological springs and latches. You can form a very simple one with your fingers when you snap. The friction between your middle finger and thumb acts kind of like a latch, allowing tension to build up in your hand. When the pressure becomes too great, the fingers spring past each other far faster than you’d be able to rub them together with muscle power alone.

Arthropods have developed a variety of body parts that allow force to build up in similar ways. But the Dracula ant method is different from most. Other snap jaw ants start with their mandibles open and have separate anatomical bits that act as the spring, latch, and trigger. M camillae mandibles are an all-in-one deal. The insects press each side together, with one mandible acting as the loading mechanism and the other acting as the striking piece—the latter is seven times more powerful than the former. It may be this method that allows Dracula ants to snap so quickly. After all, the Termes genus of termites use the same mechanism and reach similarly impressive mandibular speeds (though still just 67 meters per second to the ants’ 90).

There’s still a lot we don’t know about Dracula ants. What exactly is the snapping for? How did they evolve these mandibles? Is their mechanism really superior to other snap jaws? Biologists are still digging into these little creatures to see what other secrets they’re hiding, but for now, let’s just celebrate them as unsung champions. They may not be gorgeous, colorful shrimp, but they’re darn fast.