Look BE-4 you leap 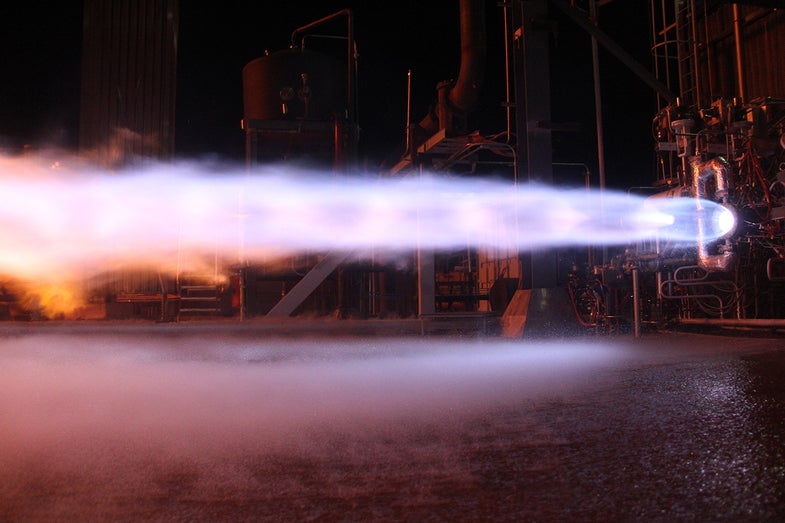 For all that rocket science gets a reputation for being complicated, it all boils down to some simple concepts. You burn stuff, and spew the resulting gases out a nozzle. Those gases coming out at high speeds push the rocket in the opposite direction.

Of course, it does get more complicated than that. The BE-4, a rocket engine that Blue Origin is developing, uses a preburner to set up that big combustion reaction that generates all those flames and propulsive gases. Basically what the preburner does is it burns a small amount of fuel, and uses the steam from that to drive some pumps that move the fuel—methane and oxygen—into the combustion chamber.

The problem is, that preburner reaction can get hot. Very hot. Like 3,000 degrees Fahrenheit, which is hot enough to melt a lot of rocket parts. In an email to a mailing list, Blue Origin and Amazon.com founder Jeff Bezos explained how Blue Origins works around that. It involves a lot of computer modeling.

Basically, the company has to cool down the steam coming from the pre-burner to about 700 degrees Fahrenheit, otherwise it might melt the turbines that power the pumps that dump fuel into the combustion chamber. To cool it, they mix unburned oxygen gas into the steam. And to make sure the oxygen mixes in thoroughly and there aren’t any hotspots, they use a fancy computer modeling system. 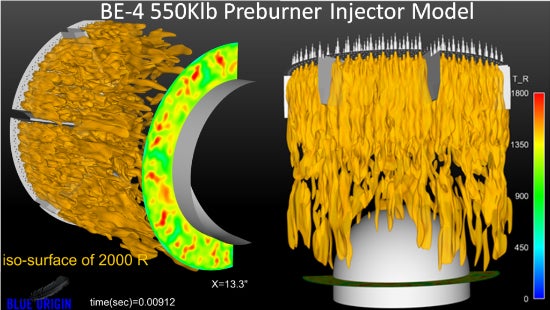 Model of the BE-4 turbine

From Bezos’ email: Modeling of the BE-4 preburner shows temperature distribution of hot gaseous oxygen entering the turbine.

And so far, so good, says Bezos. The computer modeling will hopefully cut down on physical testing, saving money and time as the company develops the next-generation rocket engine, which will be used to power the future rockets of both Blue Origin and the industry giant United Launch Alliance.

The company is hoping to fire up the rocket in stationary tests later this year.