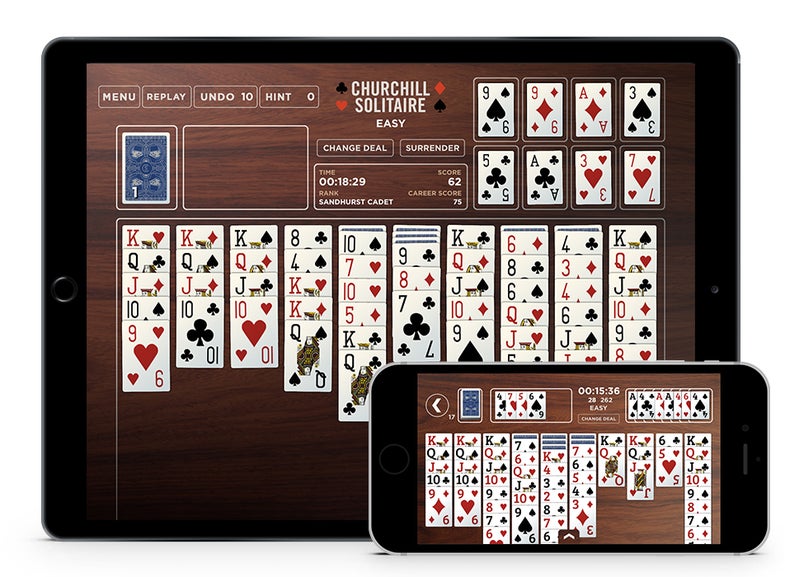 Former U.S. Defense Secretary Donald Rumsfeld has released an iPhone app, and one whose purpose is a complete shock.

It’s not a secure messaging system, nor is it an encryption program; it’s a game. And a surprisingly understated game at that: a version of solitaire.

Sorry to all the simulator fans out there, but you won’t be playing one of the “Tycoon” titles or a remake of whatever the game was that Matthew Broderick played in “WarGames.”

The game is a take on the classic game of solitaire, but played with two decks of cards and a timer. You win by creating eight piles of cards instead of the traditional four, and the game is significantly more challenging, as you’re more limited in what you can do with the deck. In this version, there’s no endless flipping until you spot something useful. For example, if you pull a black six from your upper pile, you can’t use it to bridge between a seven and a five in the columns, you can only put it into one of the “victory” piles, so it just sits there, taunting you.

A favorite of Winston Churchill’s, the game made its way to Rumsfeld via his friend André de Staercke, the Belgian Ambassador to the North Atlantic Treaty Organization when Rumsfeld was the U.S ambassador.

As with many things involving statesmen of the last century, it seems to have traveled by way of late nights spent at tables, propelled by insomnia and competitive minds.

At 83, Rumsfeld isn’t much for the typical tech style of app building. A Wall Street Journal piece detailed the former defense secretary’s hard-copy approach to feedback and testing.

The game has been a favorite of his since the 1970s, and using real cards, he competes with his wife Joyce regularly for best overall score. Now he’s hoping many others will become addicted to this mind-challenging game as well. This morning, on The Today Show, he taught host Carson Daly the basics:

The game, now available for iPad and iPhone users, is free to play, but charges a premium fee for hints and undo moves in the course of the game. Rumsfeld and his design team (which includes a former aide) say those premium profits are going to a charity.

Rumsfeld himself apparently attained a high ranking in testing phases, but was forced to start over after his scoring record was wiped in a new iteration; apparently no matter how powerful you may be in the world, your high score is always vulnerable.