The Science Of Luck

Is the phenomenon real? Can it be harnessed? 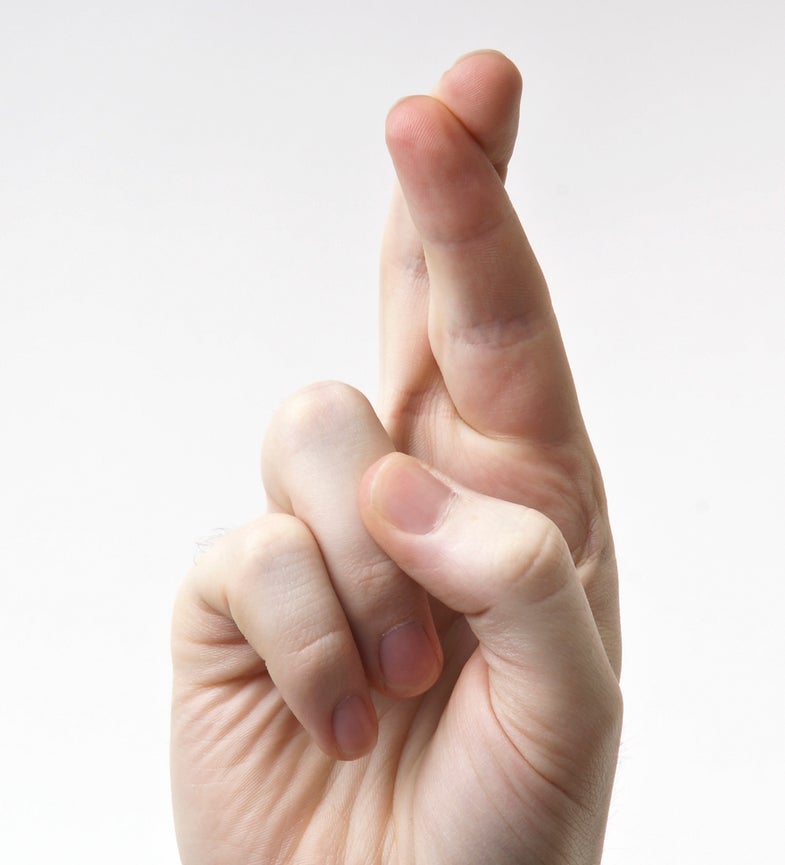 Finding money on the street may seem like a lucky break, but it might be more accurate to thank yourself. Researchers across various disciplines have attempted to decode whether there’s an actual measurable aspect to what we understand as luck. Many of these studies have found that what a person might perceive as “luck” has more to do with psychology than probability; “luck” is actually just her own positive attitude that keeps her open to new opportunities or perceiving patterns in random acts of chance. Here are some of the latest findings.

You just flipped four heads in a row, so the next one has to be tails, right? Wrong—the odds of flipping heads or tails is still 50/50, exactly the same as it has been every other time. This is called the “gambler’s fallacy,” and, according to a study published earlier this month in PNAS, our brains may be seeking out these sorts of patterns. “A major function of the human brain is to deal with the uncertainty in the real world in order to find regularities,” says Yanlong Sun, a professor of microbial pathogenesis and immunology at Texas A&M College of Medicine and one of the study authors. Our neurons detect these patterns naturally and pay special attention to their timing, Sun says. Neurons prefer alternating patterns—it’s the brain’s way of “regressing to the mean,” to correct for patterns that seem statistically unlikely. “Our study shows that our brains are probably smarter than we previously have thought, in that they are able to automatically pick up some very subtle yet important statistical structures in the environment,” he says. But this new understanding doesn’t change how Sun feels about luck overall—”As both a scientist and a person, I do believe in luck, that it is something I cannot manipulate or operate on. “

“As both a scientist and a person, I do believe in luck.”

When you’re placing bets on a game like craps or roulette that is based on chance, it turns out that your betting shifts your odds. A person who wins two bets in a row has a 57 percent chance of winning the next one, but a person who has lost two bets in a row has only a 40 percent chance of winning the next. Why? According to a study published last year, people again fear that their bets will regress to the mean—that if they won, they are more likely to lose the next time, so they compensate for it by making safer bets each successive time.

When people who have been winning take safer bets, it means they’ll probably keep winning; when people have been losing, they take riskier bets to try to win, which means they actually lose more. The actual event the gambler bets on doesn’t become any more or less probable, but past outcomes affect how the bettor allocates funds the next time around.

Crossing your fingers, knocking on wood—most of us don’t know where superstitions like these came from, even if a lot of us practice them fairly often. But several studies show that superstitions might work, though not in the way that we think they do.

In one, from 2010, golfers who were told that they were using a “lucky ball” performed significantly better than those who were told that theirs was “the same ball everyone else had used so far.” The test subjects also performed better when they were allowed to hold on to their “lucky charms” from home while solving an anagram problem. The researchers hypothesized that the people with their lucky charms by their side persisted at problems longer because they felt more effective, like they had the assistance of some other power. It’s the same logic that Alcoholics Anonymous has used to help people get sober and stay that way—people feel empowered when they think that someone else is helping them, so they actually do better at the tasks at hand.

Luck doesn’t just “happen,” even for people who consider themselves lucky. Richard Wiseman, a professor of psychology at the University of Hertfordshire in England, has done a number of studies to figure out what distinguishes a lucky person from an unlucky one. In one study, he asked people who identified as luck and as unlucky to read a newspaper. On one half page of a newspaper, he wrote in large letters: “Tell the experimenter you have seen this and win £250.” The people who said they were lucky were more likely to see the ad, Wiseman wrote, and the “unlucky” people seemed to demonstrate more anxiety, which detracted from their powers of observation. Now, Wiseman has “four principles” of luck on his web site, and they all have to do with being open to new experiences and observing opportunities as they present themselves.

Running into an old friend could be fortuitous, resulting in a profitable professional partnership, or a rekindled romance. Stephann Makri, a lecturer in information interaction at City University London, has done a number of studies to determine what serendipity is, based on how people perceive it.

“I think that luck means different things to different people—some people use it as synonym for serendipity,” he says. “But others were clear that the two were different—luck was totally out of our control and there’s nothing we can do to influence it. They think that serendipity can’t be controlled but it could be influenced.” In one study published last year, Makri asked a number of creative professionals what they do to increase their chances of a serendipitous encounter. “They included things like varying their routine, working in different environments and with different people, mixing things up in the workplace, and just generally doing things differently to avoid getting stuck in the same routine,” he says. When we think back on a lucky event, it’s often accompanied by the understanding of how that changed our lives for the better, which Makri calls an insight. So while these chance encounters can’t be controlled, people can do a lot to put themselves in a particular place and time and hope that it’s the right one. An open, positive, go-getter attitude also makes people more likely to appreciate an opportunity and to take advantage of it.