A space rock detonated into flames and smoke over western Russia Friday during the region's morning commute, ultimately smashing into a factory. 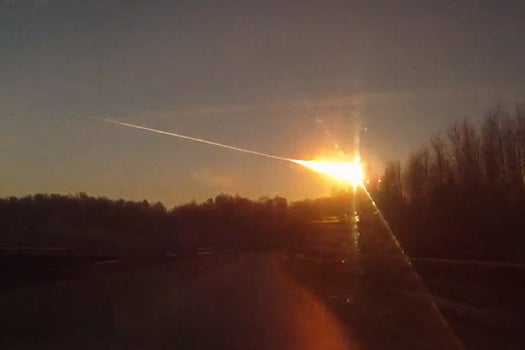 A fireball streaks across the sky on February 15, 2013, as seen from the vantage of a Russian driver's dash-mounted video camera. NEproskochil/YouTube
SHARE

The same day that an asteroid half the size of a football field will narrowly miss Earth, a different space rock exploded over three cities in western Russia. The fireball went down during the region’s morning commute today, sending drivers scrambling to upload their in-dash videos to the web.

Fireballs bursting over the Earth is nothing unusual. What is rare is to catch them on camera — from perhaps hundreds of vantage points.

Here’s why there are so many videos of the Russian meteorite. Crooks in that country will do anything for a ruble, including throw themselves into a moving car to extort money from drivers. Russian traffic laws make it practically impossible for drivers to defend themselves in court without video evidence, however, which is why most Russian drivers today have wide-angle video cameras on the dash.

So, when this morning’s meteorite exploded 12 miles above the ground, users flooded Twitter and YouTube with footage of the astronomical event. (See below.)

Russia Today’s news report suggests that the space rock ultimately crashed through the wall of a zinc factory in Chelyabinsk, spraying bricks onto a road. One image in that story, taken from Twitter, shows a smoldering, gaping hole in the factory’s roof. Other images show shattered windows and contrails left by the speeding meteorite. Reports of injuries also abound — roughly 400, according to one news source.

But the details and numbers could change, as news of the meteorite is still breaking. Early reports from panicked citizens alleged that the meteorite was a UFO, a crashing military aircraft, or even a missile intercepting the asteroid en route to the ground. (The most recently updated Russia Today news story discounts these tales.)

It’s worth pointing out the comically coincidental timing of this fireball. It occurred within the same 24 hours that a 160-foot-wide asteroid, called 2012DA14, is scheduled to swing within 14,913 miles of Earth — thousands of miles closer than any geosynchronous communications satellite. Now is also a time when asteroid hunting is ramping up and about to become a privatized affair.

But enough with the words. Watch these videos and be amazed.

Legit fireball Yes, this video looks like a scene out of a blockbuster movie. But unless the fireball is a truly cosmic joke by Russia on the rest of the world, no, it’s not fake. (There are simply too many videos of this thing from countless vantage points circulating on the web at one time.) _Video: Андрей Борисович Королев/YouTube

KABOOM! Listen to this one. We detect not one, not two, but at least three loud concussions from the fireball, plus the shimmer of breaking glass (and, of course, the blare of car alarms). Video: Григорий Ченцов/YouTube

Space rock yonder Men working in a yard seem oblivious to the fireball in the distance. Video: NEproskochil/YouTube

Blinding flash Skip about 40 seconds into this video of an intersection. The fireball bursts, coloring the scene orange and red, and then blinds the camera with intense light.
_Video: NEproskochil/YouTube