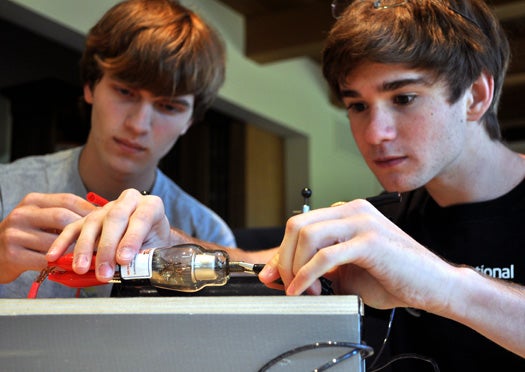 In between pep rallies and history tests, these 10 brainy students are refining cancer treatments, cleaning up car exhaust systems, and improving communication between humans and robots. 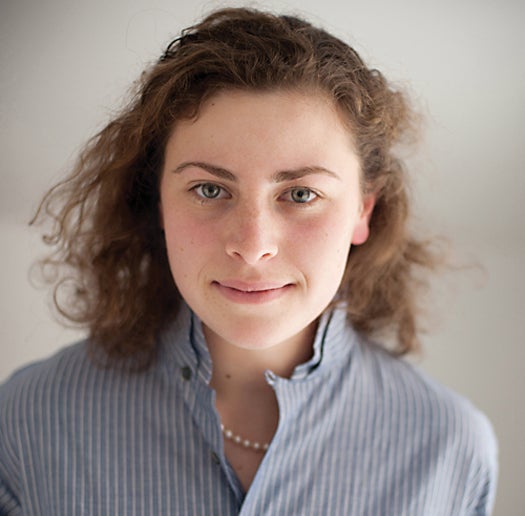 When Alison Dana Bick was in middle school, a downpour swamped the streets of her hometown and flooded its well. Public officials warned that flooding might have carried sewage into the water supply. “My friend called to ask if there was a way to check the safety of the tap water,” Bick says. When a Google search revealed that there wasn’t any fast and easy household test, she decided to create one. Four years later, she completed work on a cellphone application that determines the concentration of bacteria in a photographed sample of water. Unlike current water-testing kits that take 18 hours to evaluate the full chemical and bacterial content of a sample, Bick’s cellphone test provides a simple answer—contaminated or safe to drink—immediately. Bick knew that Colilert-18, one of the most common water-quality testing agents, turned yellow when mixed with bacteria-contaminated water; the more the bacteria, the darker the hue. So she developed an algorithm to read and analyze the yellow-pixel intensity in a low-resolution photo of the chemical water sample. She is currently collaborating with the Millburn Short Hills chapter of the American Red Cross to field-test the system. 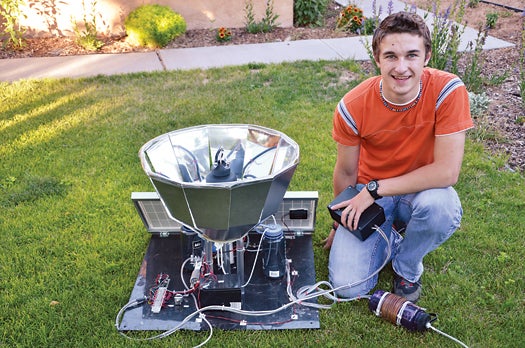 Ryan Erickson may live on a high desert mesa, but he has big plans for the ocean. Last year, he began to develop an interest in large desalination projects—which remove salt and other minerals from seawater to make it drinkable—in countries such as the United Arab Emirates and Australia. But he soon learned that no one had built a portable, automated, affordable desalination system that also treats seawater for harmful bacteria—although millions of people, including those living in coastal nations, lack safe drinking water. His solar-powered device, a three-foot cube easily carried by two people, relies on readily available materials: sand, charcoal, and plastic bottles. Saltwater is filtered through layers of sand and charcoal before entering a boiling chamber. The steam is cooled and collected on a condenser coil and then exposed to a SteriPEN, which kills harmful bacteria with ultraviolet light. Other portable desalination systems are less sophisticated and can remove only salt from the water, not other harmful contaminants. Erickson’s next step is to redesign the system to make it even more compact.

College: This fall, Erickson will enter the University of California, San Diego, where he will study electrical engineering. 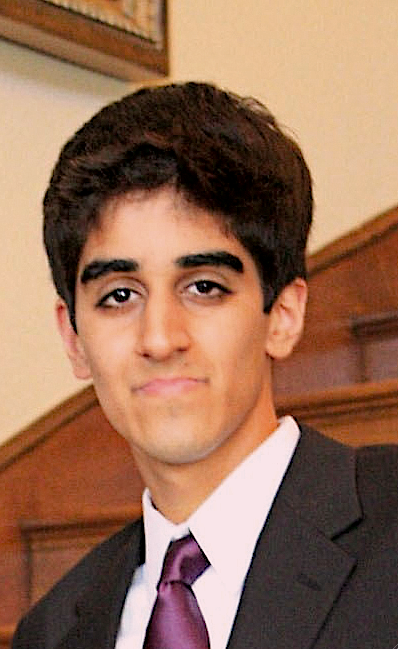 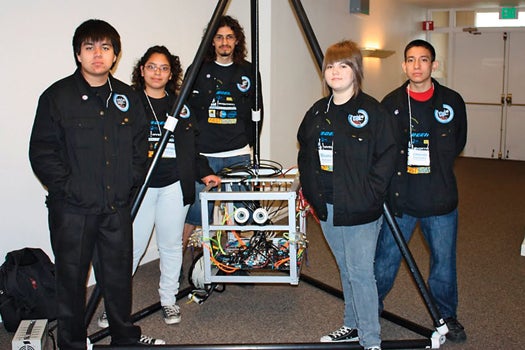 After Eddie Fernandez figured out how to take apart a remote-control car at age five, no gadget was safe. “Toys, batteries, motors, circuits: I wanted to know how they all worked,” he says. In seventh grade, he joined a team that built robots for the national FIRST competition. One entry threw 80-inch spheres eight feet in the air. Another played soccer. He also helped design and build an underwater autonomous robot. But his best work so far, he says, came about when he led the construction of the EVROV robot arm, designed to lift and move instruments to assist astronauts with spacewalks. He also created a complementary 3-D video system that helps human operators gauge depth as they remotely operate the arm from inside their ship. He presented the robot (and its nearly $11,000 price tag) at last year’s Conrad Foundation Spirit of Innovation Awards. Fernandez is motivated in part by uncertainty—his father was recently deported to Mexico. “When it happened, it really hit me that things can change overnight,” he says. “And that I needed to work harder and make better use of my time.”

College: Fernandez will be heading to Arizona State University in the fall to study mechanical engineering. 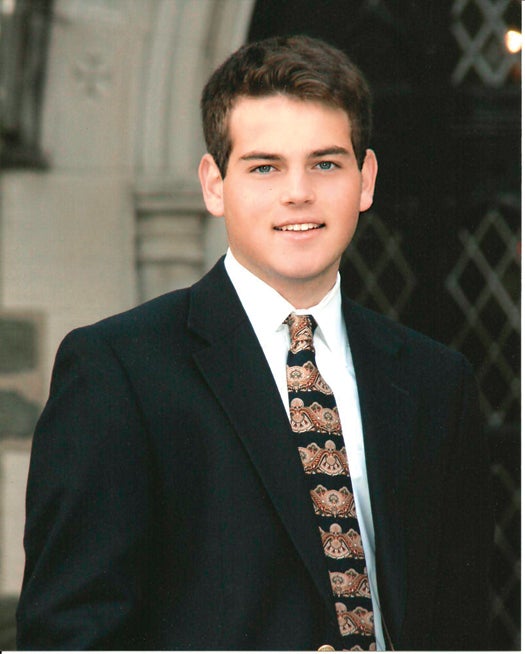 When Alex Gilbert was about six years old, a close relative of his was diagnosed with multiple sclerosis. A year later, she discovered that doctors had misread her MRI results. “I was so young, I don’t think I fully appreciated how shocking [the false diagnosis] was,” Gilbert says. At age 15, he began to study magnetic imaging technology, and after his sophomore year in high school, he had an internship at the National Institutes of Health. There he developed a technique to improve MRI image contrast so that practitioners can more accurately spot the signs of neurological diseases. Magnetic resonance imaging systems excite protons and record the pattern by which their spinning slows down—that’s what produces the image. But the cell density of each part of the body alters the signal intensity: Air and bone produce weak signals and dark images. Fat and marrow produce bright images. Gilbert wrote an algorithm that accounts for those differences and improves image contrast, which can help reveal hard-to-spot tissue damage. The next summer, at Massachusetts General Hospital in Boston, Gilbert developed another technique for improving contrast in MRI images. He found that by injecting a stain that binds to nucleic acids, the structural details in gray matter are clearer.

College: Gilbert is about to start his freshman year at MIT. He plans to major in physics or biophysics. 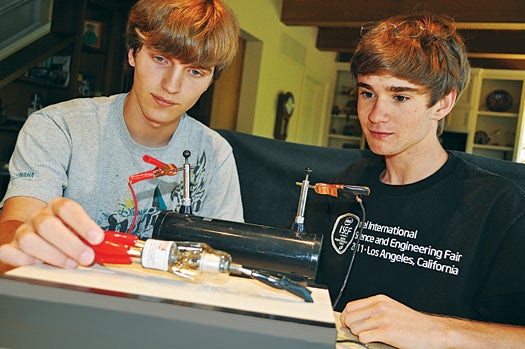 Matt Feddersen and Blake Marggraff have been blowing things up in their backyards together since the fifth grade. “We each have very patient parents,” Marggraff says. In their junior year of high school, they entered the world of formal experimentation. A teacher mentioned that faulty tin-based shields at nuclear power plants were somehow amplifying radiation. Feddersen and Marggraff, who both had family members who had had battled cancer, wondered if tin could be used to create a secondary dose of x-rays that would augment an initial dose, making radiation treatment more effective. In their high school’s biology lab, the students injected tiny particles of tin into a simulated tumor made out of yeast. When x-rays hit the metal, it produced a second wave of radiation like in the faulty nuclear shields, but this time frying additional cells. The treatment killed more than 20 percent more cells than conventional radiation treatments, for only 60 cents per patient. Feddersen and Marggraff plan to test the treatment on human cells when they move on to college.

College: Feddersen is attending the University of Illinois for a year and plans to transfer to MIT. Marggraff is entering Washington University in St. Louis. 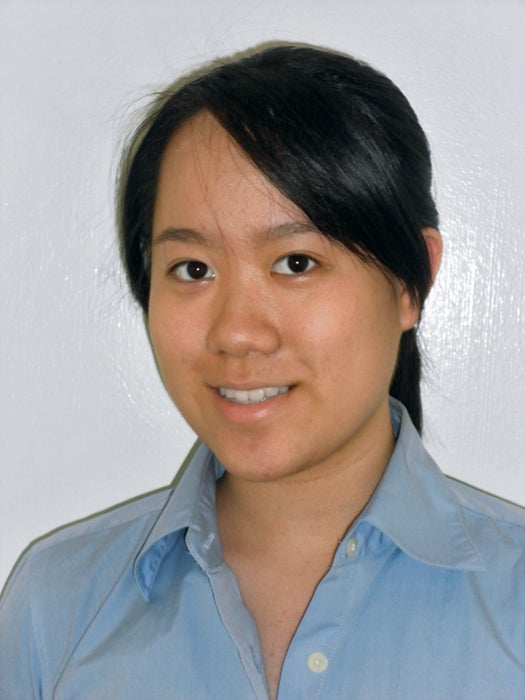 Since she first watched a television show about DARPA’s Grand Challenge competition for driverless cars in 2006, Jao-ke Chin-Lee has been fascinated with artificial intelligence. In high school she applied for a summer research program at MIT’s Computer Science and Artificial Intelligence Laboratory, and wound up working on an autonomous forklift known as Pokey, one of the lab’s major projects that year. Robots have a difficult time processing the subtle inflections of human language, especially when a lot of background noise is present. Pokey, designed to operate on construction sites, couldn’t tell the difference between spoken commands and the ambient noise that shares the same frequencies as human speech. After teaching herself how to apply the necessary math and computer science to speech processing, Chin-Lee developed an algorithm that filters out the background noise. The program has potential applications beyond just Pokey; she hopes to someday build it into voice-operated wheelchairs, for example.

College: This fall, 16-year-old Chin-Lee, who skipped first grade, will begin her freshman year at Harvard University, where she plans to study computer science and machine learning. 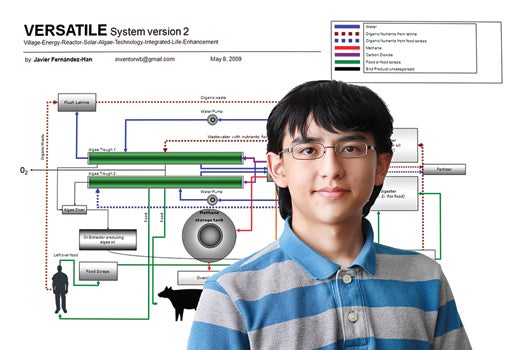 While visiting the 2005 World Exposition in Japan, Javier Fernandez-Han and his family came across a mock refugee camp staged by Doctors Without Borders. “I didn’t know people lived in those situations, without drinkable water, food and shelter,” he says. “I realized I wanted to focus on systems for sustainable living.” In 2009, at the age of 15, he began to integrate existing and modified devices such as a water pump and a flush latrine into an all-in-one system for refugee camps and small villages in the developing world. Among other functions, his invention treats sewage, turns harmful gases including methane into fuel for algae, and produces oxygen and algae biomass that can feed livestock. Later that year, he won the Ashoka Lemelson Excellence Award for the device. Soon he began to wonder: If he created this system by himself, what could a whole team of inventors do? He founded two groups, Inventors Without Borders and Innovation Foundry, in which teenagers collaborate on problems such as hunger, lack of access to education, and poor air quality. 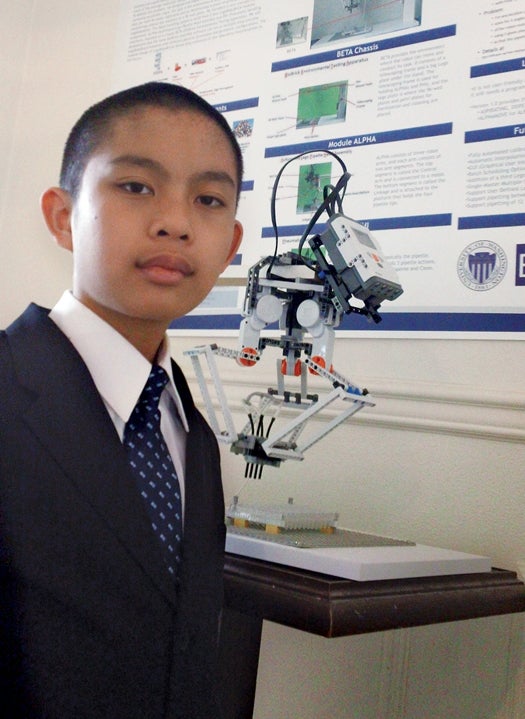 At the age of nine, Gabriel See joined his high school’s robotics team. By 11, he had mastered every high-school science and math course available in his district and enrolled in undergraduate and graduate courses at the University of Washington. See had worked with several commercial liquid-handling systems—devices that use robotic arms and motorized pipettes to measure, transfer, and control liquid in precise quantities—but knew that the equipment’s $10,000–$50,000 price tag made them unaffordable to all but the best-endowed labs. So, at the university’s pathology lab, he invented a simple system that uses Lego Mindstorm programmable construction toys. Within a year, he finished the system using firmware from the Carnegie Mellon Robotics Lab and software that he wrote himself. It can transfer as little as five microliters (slightly larger than the tip of a ballpoint pen), the amount demanded by such projects as DNA assembly. The system costs just $750, making it affordable to small universities and start-up companies. The device won the silver medal in MIT’s 2009 iGEM competition.

College: See still has to learn to drive and to go to prom, but he’s already hoping to study computational biology at MIT. 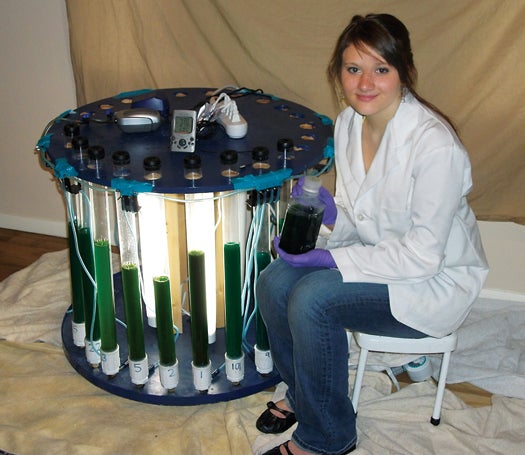 Sara Volz insists she’s not some “crunchy” Colorado teenager. She hikes, skis, and camps with her family, but she’d rather spend her time conducting experiments. Volz decided at an early age that she wanted to help do away with fossil-fuel consumption, and in the seventh grade, began studying alternative fuels. As a high-school freshman, she began testing hemp oil as a potential biofuel source before reading several journal articles about algae-based fuel. After talking local alternative-fuel energy companies and labs into familiarizing her with the field and equipment, she set up a photobioreactor and a novel medium in which to grow algae at home. She has manipulated the growth conditions to limit the algae’s supply of nitrogen, and suspects that the manipulation increases transcription of an enzyme that enables the algae to accumulate more oil. “The whole idea is so appealing,” she says, “making oil from pond scum.” Next she will test whether extra copies of the enzyme’s genes cause the algae to produce more oil, which would mean higher yields of oil per acre.

College: Volz wants to attend an Ivy League or small liberal-arts school with a strong research focus. She plans to study biochemistry or molecular biology.