Asgardia might become a legit state, but don't count on it 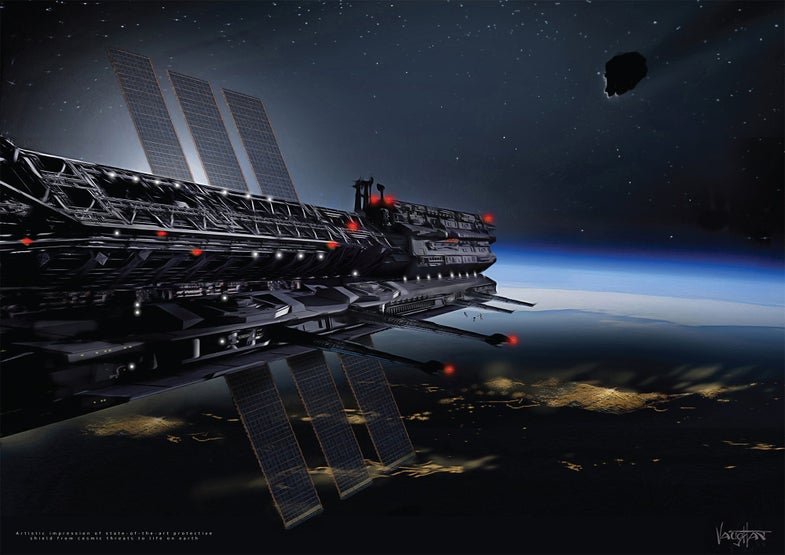 I woke up this morning at 4, to listen in on the founding of an ‘independent space nation.’ I had to wonder if I was still dreaming as I sat in my dark living room, listening to scientist Igor Ashurbeyli explain in Russian how the plan would work, while his English translator muttered simultaneously, resulting in audio so garbled that large portions of the livestream were completely incomprehensible.

Details are pretty scarce on what the actual plan is, except that whatever it is, it will be named Asgardia, after Norse mythology’s city in the sky, Asgard.

Ashurbeyli is chairman of UNESCO’s Science of Space committee, and founder of the Aerospace International Research Center (AIRC), which has invented Asgardia, the ‘first new space nation’ and ‘future member of the United Nations.’ But as of yet, the group appears to have no concrete plans to send anyone to space. It may try to launch a satellite in 2017 or 2018, but what that satellite’s function is, or how it’s getting to space, are equally nebulous.

Asgardia’s mission will be a peaceful one. The group hopes to establish an off-Earth residence that provides equal access to space, regardless of religion or country of origin, opening up space to developing countries. The goal is to advance humanity’s place in space without getting bogged down in geopolitical squabbles, said Ashurbeyli.

“Today, many of the problems relating to space law may never be solved in the dark woods of modern international law. …It is time now to create a new judicial reality in space.”

AIRC posits that Asgardia will develop a shield to protect Earth from space threats such as incoming asteroids, space debris, and coronal mass ejections from the sun which could wipe out our power grids. Previously, Ashurbeyli proposed URBOCOP, a weaponized space station that would incinerate hazardous space rocks or missiles from Earth’s orbit.

If you are 18 or over and have an email address, you can apply to become a ‘citizen’ of Asgardia today. At the time of this writing, more than 4,900 people have signed up, including at least one Popular Science editor.

“When the number of those applications goes above 100,000 we can officially apply to the UN for the status of state,” said Ashurbeyli, adding that Asgardians would not have to give up citizenship in their countries of origin.

But can Asgardia legitimately call itself its own nation?

Frans von der Dunk, who studies space law at the University of Nebraska, suspects the word “nation” was chosen for a reason. In international law, a “nation” refers to populations that are under special regulations but don’t necessarily form an independent country—America’s Indian Nation is a good example of this. It’s more of a philosophical and cultural designation than a legal one.

To become an independent country, or “state”, a majority of members of the U.N. would have to recognize Asgardia as such. Which seems like a long shot, considering the other requirements:

“A state in the classical sense has a territory and has a significant portion of its population living on that territory,” says von der Dunk. “As long as nobody’s going into space, you can have as many signatures as you want, but you are not a state.”

To become recognized as a separate state, the group would also have to set up an effective government—something AIRC says it plans to do.

Von der Dunk says that nothing in the Outer Space Treaty—the main legislation governing activity in space, whose goal is to make sure space remains “the province of all mankind”—would prevent this peaceful nation from forming. It’s when they attempt to claim territory in space where things could get complicated. The Treaty says no one can claim to have exclusive rights to territory in space, but the legality of the situation will depend on how the group goes about it. That’s something which we likely won’t have to worry about for a long time, seeing as this group does not appear to have a clear plan of action, the necessary technology, or a source of funding to set up a space settlement.

“This may be the germ that 50 years from now will create a true nation in outer space,” von der Dunk says, “but I don’t see that happening over night, or even in the next 10 or 20 years.”

As private companies promise cheaper rides to space, everyday Americans are once again dreaming of going to space, and it seems like every billionaire has his own plans on how to make humanity a spacefaring species. Asgardia is just the latest of those grand but mostly unsubstantiated dreams, including the technology-hobbled Mars One project and Elon Musk’s massively expensive proposal to colonize Mars.

“I admire people who dare to dream,” says von der Dunk, “and sometimes you need people to go out of the box and start something.”

By contrast, people can also prey on the dreams of others, and try to use those dreams to promote their own interests. At the moment it is rather difficult to say whether Asgardia is a sincere effort with poor execution, a marketing scheme, or an absurd joke.